January data from the IHS Markit France PMI surveys pointed to the fastest contraction in private sector output since November 2014. This was shown by the seasonally adjusted Composite Output Index registering below the neutral 50.0 mark at 48.2 in January, down from 48.7 in December. January's weak performance was driven by the service sector, with firms recording a sharper fall in business activity compared to December, and the fastest overall decline for almost five years. Meanwhile, manufacturers saw output contract only fractionally in January, after the quickest downturn for over three-and-a-half years in December, which represented a move towards stabilisation. 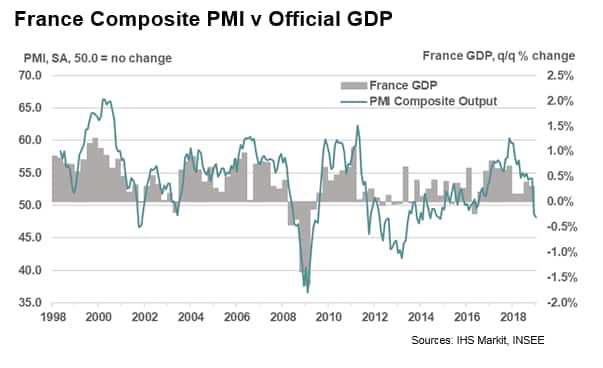 The latest results may appear surprising, given that the nationwide 'gilets jaunes' protests were a key reason behind the initial downturn in December, and have become less widespread at the start of 2019. However, an experimental regional breakdown of the France services PMI indicated that sharp and accelerated falls in business activity were largely confined to two main geographical areas. Notably, these regions appear to be where protests are still at their most intense, namely in Paris and the South West. The contractions seem to have more than offset a rebound seen in other parts of France, suggesting that lingering protests can explain some of the weakness seen in the service sector at the start of this year. 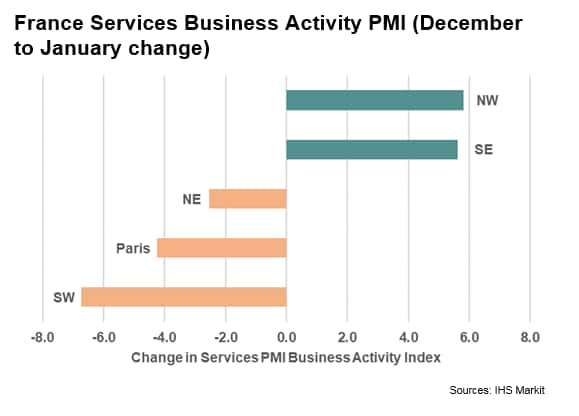 A divergence with the INSEE Business Climate Indicator also highlighted the surprisingly weak PMI results during January. The indices are strongly correlated over the past two decades, but in the first month of 2019 resilience in the INSEE composite indicator contrasted with the contraction seen in the Composite Output PMI. Underlying data suggested that the divergence was due to differing service sector results, as there was a slight improvement in the INSEE services indicator, while the rate of contraction signalled by the PMI accelerated.

However, when the signals from the two surveys have diverged in the past, the PMI has often acted with a lead on the INSEE survey. For example, after the 2008 financial crisis the PMI showed a sharp rebound in activity, while the INSEE survey was far slower to register a corresponding recovery. In that instance, PMI data gave a more accurate advance signal of official GDP growth. 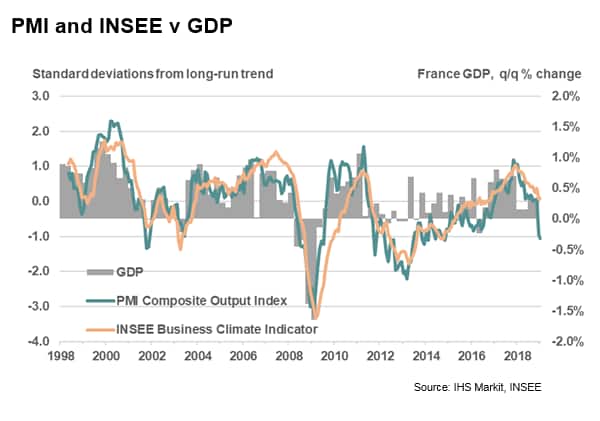 Underlying weakness across the eurozone

While regional PMI data suggests that the 'gilets jaunes' protests are still negatively affecting service sector business conditions in France, there also remains an underlying weakness across the eurozone. Service sector business activity across the single currency area rose only modestly during January, in line with December's 49-month low. At the national level, this was driven by the decline in France, alongside a marginal contraction in Italy. Germany has also experienced a sharp loss of momentum from the peaks seen at the start of 2018.

February data from IHS Markit's flash PMI surveys will shed further light on the extent of the slowdown across the currency area, and particularly in France. As disruptions from the 'gilets jaunes' protests fade, persistent weakness in France could indicate that the anticipated economic slowdown for 2019 is beginning to bite.

The next release of Flash PMI data for France and the eurozone will be published on the 21st February 2019. 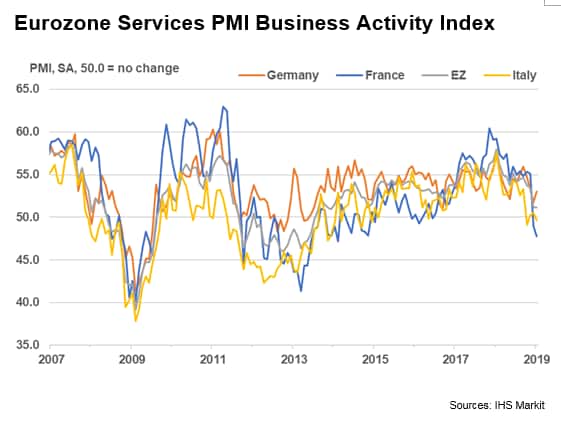