Official data showed Taiwanese exports rising in June, but the modest gain looks likely to be short-lived as the export sector continues to face significant headwinds, as indicated by PMI survey data from IHS Markit. Finance ministry data indicated that Taiwan's exports rose at an annual rate of 0.5% in June, the first increase in eight months. Detailed data revealed that growth in shipments to the US was the key driver of exports.

Widely regarded as a gauge for global demand, the surprise gain in Taiwan's exports naturally raised the question of whether the improvement is a harbinger of an upturn in global trade conditions in coming months, or even if Taiwan is benefitting from trade diversion as US importers shift away from China to Taiwan to avoid tariffs. Indeed, the Ministry of Finance commented that the unexpected growth in June exports was lifted by the relocation of factories from mainland China to Taiwan amid trade war tensions.

However, recent PMI data suggest the export rise in June looks likely to be short-lived. The headline Taiwan manufacturing PMI sank to its lowest for seven-and-a-half years during June, indicating another severe deterioration in manufacturing conditions. Notably, inflows of new orders contracted sharply, dragged down by a steep drop in new export sales.

Historical comparisons suggest that the latest PMI is consistent with near zero growth in the economy. 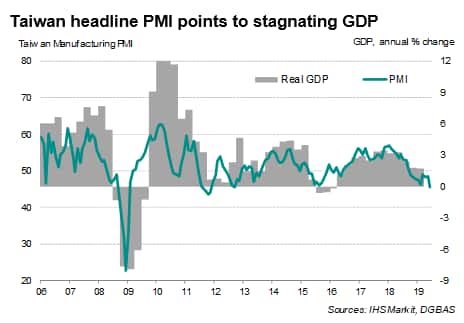 Subdued global demand also adds to the gloomy outlook for Taiwan's exports. The JPMorgan Global PMI, compiled by IHS Markit, signalled the pace of global economic growth to have stuck at a three-year low in June, with manufacturing remaining the main area of weakness.

Furthermore, with Taiwan being a major electronics exporter, deteriorating worldwide business conditions for electronics producers, as indicated by the IHS Markit Global Electronics PMI, boded ill for Taiwanese economic growth. The PMI for the electronics sector fell in June to its lowest since November 2012. 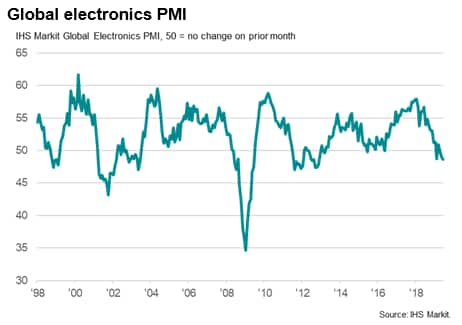