With sales and production falling at a fast pace, Brazil has been making an effort to increase exports. However, developing export markets is never an easy and fast task, and the government has been trying to sign more FTAs (free trade agreements) to help the industry. In a way, that is a paradox for a country that has closed its borders and that has always seen its local demand reason enough to attract OEMs.

In 2012, Brazil increased the IPI (tax on industrialized products) on imported vehicles, excluding those made in the Mercosul countries and in Mexico, by 30 percentage points.

That has changed the market, to imported brands despair. Kia's market share, for example, plunged to 0.7% last year from 2.3% in 2011. JAC went to 0.3% from 1.1% and Chery fell to 0.3% from 0.9%. But do not think that the main makes were the ones that benefited the most. Between 2011 and 2014, Fiat was able to retain its share in 21% range, but Volkswagen lost 2.6 percentage points. Chevrolet became the second most popular brand in 2014, but with a lower market share: 17.4% from 18.4% in 2011.
Hyundai was the brand that enjoyed the largest gain, but because of the locally-built HB20 - which is not built anywhere else in the world. Registrations of imported Hyundai models collapsed 50.4%. Toyota was the other make that grew the most, in this case thanks to the Etios. Toyota's entry in the B-segment was made in India, but never imported to Brazil. In other words, the brands that grew the most while Brazil was closing its borders did not benefit from trade barriers.

With quotas in place and the localization of some vehicles previously imported from Mexico, such as the Ford Fiesta and the Nissan March, the deficit went to 67,365 units last year. IHS Automotive forecasts that Brazil will almost break even this year, as more vehicles are localized - the Volkswagen Golf and Jetta and the Nissan Versa began production in Brazil this year. Our outlook is for a surplus next year, when we assume the Volkswagen up! and the Jeep Renegade, among others, will be exported to Mexico. 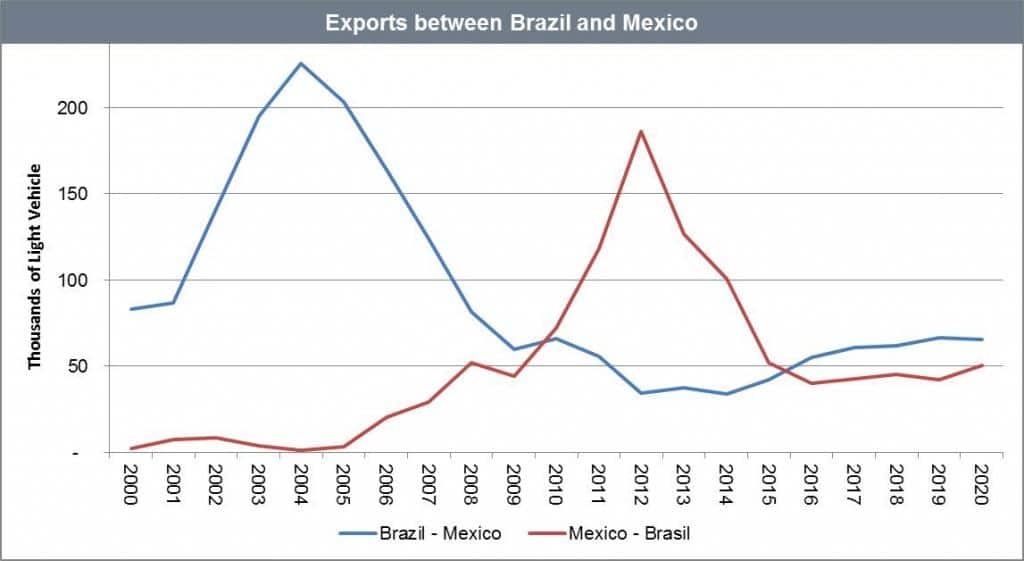 It is interesting to note that the quotas are based on dollar amounts, while the recently announced FTA with Colombia uses units. Brazil exports to Mexico more vehicles in the lower-end of the market, while Mexico exports more expensive cars. Volkswagen, for example, exports the Gol to Mexico - a vehicle that costs between USD8,000 and USD15,000 in Brazil - but imports the most expensive trim level of the Jetta, for which it charges USD24,900 in Brazil.

There is no doubt that the barriers imposed in 2012 helped Brazil to slow down the pace of imported vehicles. The problem is that the local market is likely to close 2015 below 2.5 million units from the record high of 3.6 million in 2012, so Brazil has to deal with the extra capacity that it added in the last couple of years.

All this comes as the government desperately seeks a fiscal balance and has reduced benefits to exporters. The return on taxes paid on exported goods has already fallen to 1% from 3% and will shrink to 0.1% in December. It will start recovering in 2017 to 1%, in 2018 to 2%, and in 2019 to 3%. Another Brazilian paradox.