The Middle East and North Africa (MENA) region has been increasingly affected by water-related issues. This has focused concerns on government ability to meet demand for this increasingly scarce resource, the associated potential for violent protests and interstate conflict, and the consequences for economic development.

The MENA region contains only 1.4% of global freshwater resources, making it the most water-scarce region worldwide, suffering from increasing desertification and droughts. The United Nations defines critical water stress - the highest possible category - as the situation of more freshwater being withdrawn than freshwater resources are available. Of the 16 countries facing critical water stress globally, 12 are in the MENA region: Kuwait, the United Arab Emirates, Saudi Arabia, Libya, Qatar, Yemen, Algeria, Bahrain, Syria, Egypt, Oman, and Jordan. Those countries withdrew more than 10 times as much freshwater in 2018 than was available from renewable resources. The situation is, however, getting worse as freshwater supply is becoming increasingly scarce. 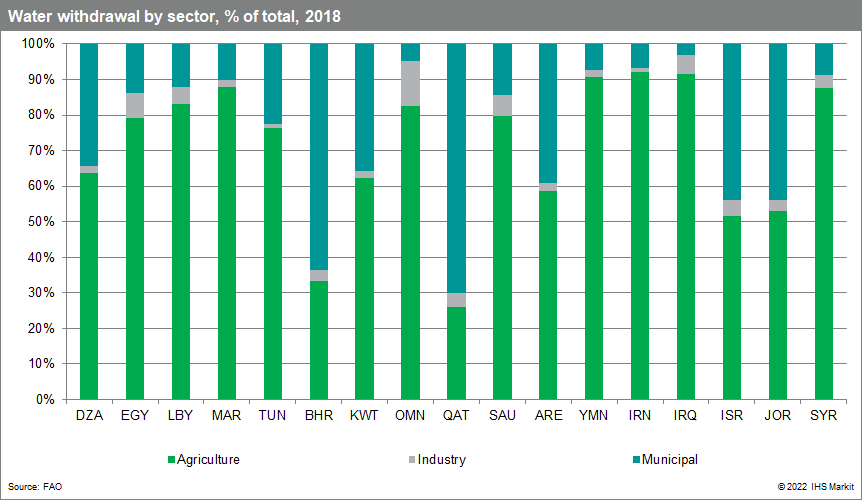 Demand is also growing, and demographics are unfavorable. IHS Markit expects the MENA region's population to grow by 45% between 2020 and 2050, putting further strain on scarce water resources. The lack of, and rising prices for water restricts economic performance and slows development. MENA countries increasingly facing an existential dilemma between ensuring food security and water use, as well as expanding productive sectors such as the manufacturing and agricultural (either generate export revenues, like Morocco and Egypt or reduce import dependencies like the GCC countries). Developing these sectors is, however, problematic given that they are highly water-intensive, demonstrating an obvious policy contradiction that risks putting natural water supplies under further strain.

Agriculture is by far the largest consumer of water in Egypt, Morocco, Tunisia, Kuwait, Oman, Saudi Arabia, the UAE, Iran, and Iraq. In Israel, water withdrawal by agriculture represented about half of its total. Industrial water withdrawal was most prominent in Oman, where 13% of water was withdrawn for industrial purposes. For the region overall, IHS Markit currently projects agriculture to grow by 2.5% on average between 2020 and 2025. We forecast agriculture to perform strongly in Jordan, Oman, Qatar, the UAE, and Iran, which all have average growth rates for agricultural production ranging between 3.0% and 4.4%. Given the water scarcity in the region, such strong growth will also aggravate stress relating to water access across the region. There is a risk that the planned sectoral growth will not be realized in the absence of sufficient access to freshwater.

Producing freshwater in Saudi Arabia and the UAE is expensive, thus increasing the cost of agricultural production. In Saudi Arabia, nearly 80% of total water withdrawn is already used for agriculture, indicating the difficulty of sourcing additional water resources to permit agricultural expansion. The GCC is therefore likely to remain highly dependent on agri-food imports, notably for basic staples like rice, wheat and flour, and pulses, which are imported almost 100% across the GCC.

State failure to address water supply issues threatens to become a major source of civil unrest, with heightened risks of violent protests demanding better access to water and exposing governments' inability to secure water resources. This is even more problematic for countries whose water security is not only dependent on improving water management and modernizing technologies but is also heavily dependent on the government's ability to secure shared water resources from other countries. This is notably the case for Egypt, Iran, Turkey, and Israel.

Economically stronger countries like the GCC members and those that had already initiated national plans on water management (such as desalination processes and the modernization of irrigation systems for private, industrial, and agricultural usage) like Egypt and Israel, are likely better placed to improve access to water resources. Israel is likely to increasingly use water to advance its diplomatic objective of normalizing relations with MENA countries. In November 2021, Israel, Jordan, and the UAE signed a flagship energy-for-water deal, whereby Israel would double its annual supply of desalinated water to Jordan to 200 million cubic meters of desalinated water to water-stressed Jordan in exchange for 600MW of renewable electricity from a UAE-financed solar energy facility in Jordan. Israel's 'water diplomacy' is facilitated by its position as one of the world leaders in water reuse and desalination, with 86% of its total wastewater being recycled. Having been in a situation of water shortage 10- 15 years ago, Israel currently has a surplus of water through a combination of recycling of wastewater and desalination technology, enabling it to export regionally. This places Israel as a key water stakeholder regionally in the coming years, which is likely to facilitate its access to MENA countries, thereby improving its prospects for pushing its normalization agenda within the MENA region.