War risks on the Korean peninsula

North Korea will celebrate the anniversary of its ruling party's foundation on 10 October; in the past, North Korea has used notable dates in its calendar or international events to demonstrate its development of nuclear weapons and ballistic missiles. On 9 October, Russian media quoted an official returning from Pyongyang as stating that North Korea was preparing for another long-range missile test, and on 22 September, North Korean Foreign Minister Ri Yong-ho told reporters in New York that the country may conduct a test of a nuclear weapon in the Pacific. According to Japan's Ministry of Defence, a second North Korean missile fired over Japan on 15 September flew 3,700 km, putting the US territory of Guam well within range. The United Nations Security Council (UNSC) on 11 September unanimously passed new sanctions in response to two intercontinental ballistic missiles (ICBMs) launched in July. 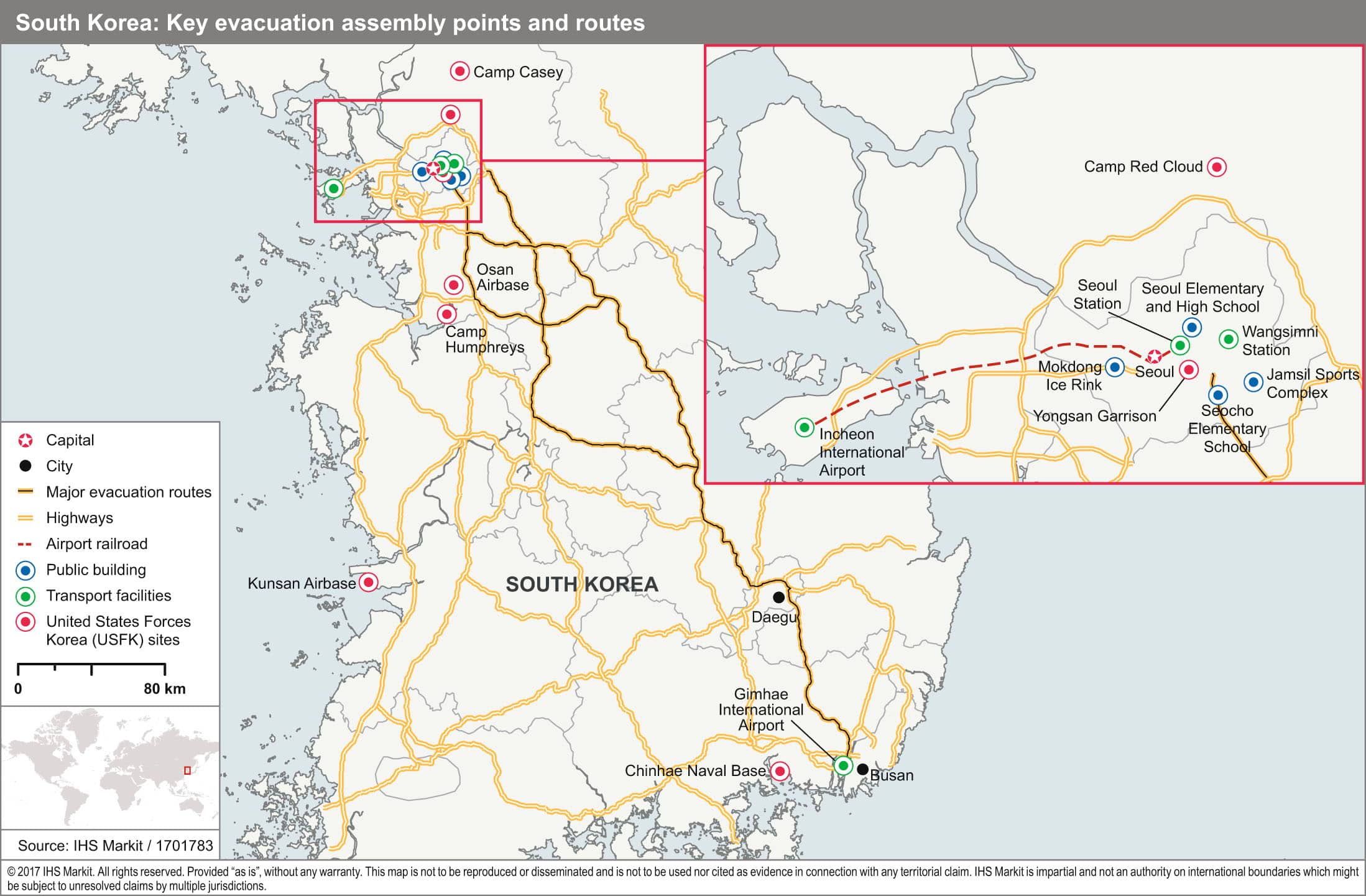 The intensification of incidents and increase in perceived unpredictability on both sides raise the risk of unintended escalation. North Korea probably calculates that it cannot afford to appear to be giving any ground in response to US pressure; its fears were probably compounded by China's unwillingness to obstruct the passing of the latest UNSC sanctions or provoke a more assertive US administration. Although North Korea is unlikely to deliberately cross US red-lines, IHS Markit assesses that it is currently more willing to approach them. The potential for North Korea or the United States to miscalculate the other's threshold for military action is high, especially in this kind of brinkmanship.

North Korea is probably seeking to improve its position in any future negotiations focused on de-escalation. Multiple statements and images released by North Korea over the past months highlight the leadership's commitment to developing nuclear-capable intercontinental ballistic missiles (ICBMs), despite the adverse international reaction and the risk to its relations with China. North Korea will probably maintain the accelerated pace of missile launches and tests in the coming months, with the hope of focusing any future negotiations, including informal ones aimed at de-escalating the current crisis, on the frequency of such actions, rather than the components of its nuclear or missile programmes.

There is little chance of the United States backing down; nevertheless, it will probably prioritise exerting pressure on China through unilateral sanctions and threatening military action to extract concessions from North Korea. Statements by a range of high-level US officials making public reference to the consideration of military options indicate a departure from past administrations' policy of restraint, underscoring its failure to change facts on the ground, and that the threshold for pre-emptive US military action against North Korea has lowered.

China will probably press for diplomatic talks, arguing for the suspension of North Korean nuclear device and missile tests in exchange for the suspension of US-South Korean military exercises. The frequency of intermediate and intercontinental missile launches and the timing of the nuclear test – while China was hosting the BRICS Conference – increase the likelihood that China will increasingly diligently implement UN sanctions. However, China is unlikely to go so far as to fully implement new sanctions that, in its judgment, would risk substantially undermining the economic well-being or social stability not just of North Korea, but also of the Chinese population near the North Korean border, which relies heavily on such trade.

Japan and South Korea are currently more likely to call for US deterrent military deployments to the region and seek to improve their domestic offensive and defensive capabilities in the one-year outlook. South Korean media reported that as of 3 September, the Ministry of Defence was in discussion with the United States on the forward basing of the "most powerful US tactical weapons", probably including "stealth" bombers. In Japan, Prime Minister Shinzō Abe's administration continues to pursue a "normalisation" of the Self-Defense Forces (SDF), which will give it a status and range of capabilities equivalent to other countries' armed forces.