War in Ukraine leads to drop in global business confidence

In addition to tracking changes in current business conditions, such as actual monthly changes in output, order books, prices and employment, the PMI surveys compiled by S&P Global also include a subjective question which asks companies about their own output expectations for the coming year. This question reveals that Russia's invasion of Ukraine has hit business confidence across much of the world, representing a bigger jolt to worldwide business optimism than anything recorded over the last decade, with the sole exception being the onset of the pandemic.

Geopolitical instability, commodity price volatility and supply-chain disruptions all acted to dampen sentiment, particularly in Europe. This marks a big turnaround from the start of the year when firms were increasingly optimistic that the COVID-19 pandemic would be much less disruptive in 2022 than in the preceding two years. 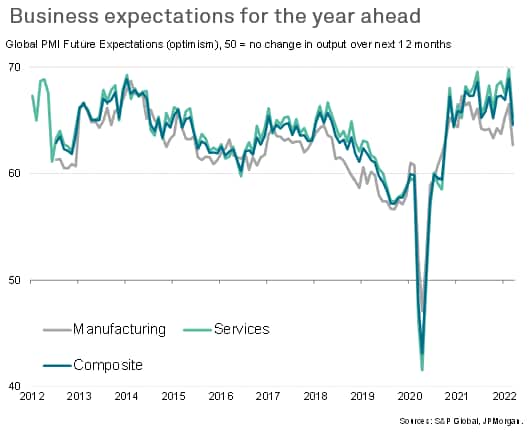 The JPMorgan Composite PMI Future Output Index was down 4.3 index points in March, representing the third-largest slump in confidence in the history of the series which stretches back almost a decade. The only months to see a greater drop in sentiment were at the start of the COVID-19 pandemic in March and April 2020. Optimism waned across both the manufacturing and service sectors, dropping to 18- and 13-month lows respectively.

Falls in confidence were widespread. Of the 45 countries for which PMI data are available around the world, some 84% saw confidence decline between February and March following the Russian invasion of Ukraine. Most of the largest downgrades to expectations were seen in European countries, where the economic links to Russia and Ukraine are strongest. In fact, all European countries covered by PMI data saw sentiment decline, with the region as a whole seeing confidence drop to a 17-month low. 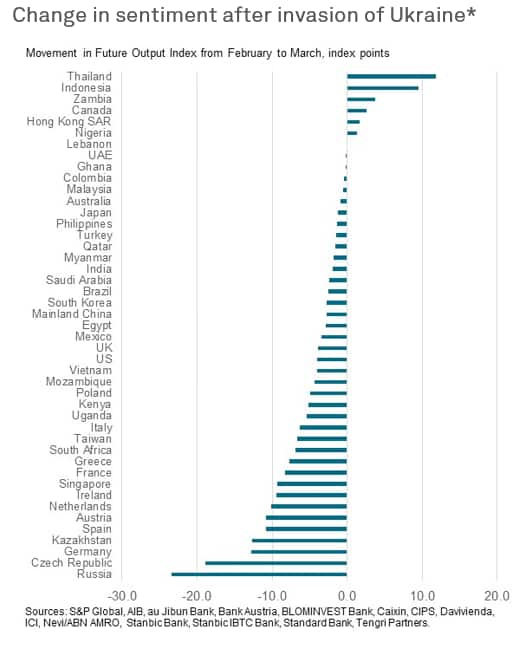 *sector coverages vary by country, with a mix of manufacturing, composite and whole economy surveys used.

The shock of the invasion of Ukraine hit business confidence at a time when companies were becoming increasingly optimistic regarding the outlook, with many seeing a path out of the COVID-19 pandemic and relative lack of disruption this year as key drivers of improved business prospects for the year ahead.

In fact, while business confidence dropped sharply in March, trends in output were generally more resilient, reflecting the further reopening of economies from pandemic-related restrictions on economic activity. The JPMorgan Global Composite PMI signalled a solid increase in current output that was only slightly softer than seen in February. Even in Europe where confidence dropped steeply the rate of output growth remained sharp, softening only marginally from February as less stringent COVID-19 restrictions rejuvenated service sector performance. Services activity in Europe even expanded at the fastest pace since August last year. 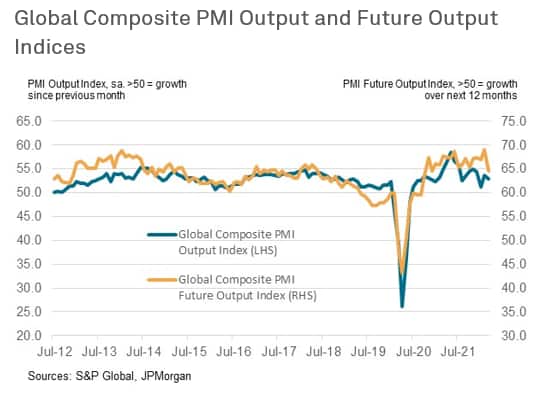 This divergence between current output growth and business expectations suggests that the slump in sentiment is more reflective of what companies expect to face in the months ahead rather than current conditions, but also implies that output growth could slow during the second quarter of the year as the impacts of the war and associated sanctions start to bite.

The flash PMI releases on April 22nd will provide the first indications of economic growth trends at the start of the second quarter, including in Europe where the data will be closely followed to see whether the steep drop in confidence feeds through to weaker growth in new orders and output.

© 2022, IHS Markit Inc. All rights reserved. Reproduction in whole or in part without