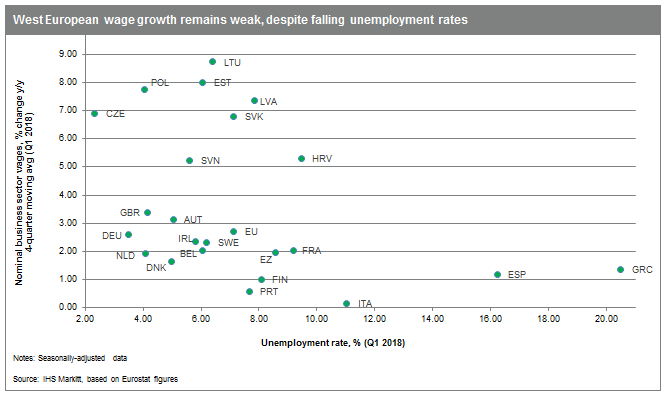 In recent years, wage growth has remained stubbornly weak throughout Western Europe, even where unemployment rates are low. There are a number of possible explanations for that phenomenon:

Is the Phillips curve still valid in Western Europe?

In practice, the NAWRU is difficult to define, and few economists believe that the "natural" rate of unemployment remains stable in a given economy. Looking at Eurozone data from the last 20 years, the relationship between hourly wage growth and the employment gap (measured as the difference between the unemployment rate and the NAWRU) does not show a clear pattern. 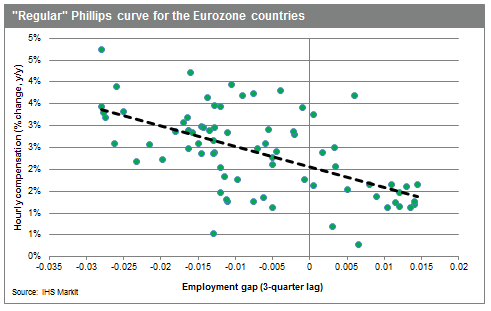 Nevertheless, when we adjust for productivity, the pattern is much clearer, indicating that the employment gap must fall below a certain level before wage pressures rise more rapidly.
As demonstrated by the chart below, the slope of the curve becomes steeper when the Eurozone's jobless rate falls more than one percentage point below NAWRU, a point beyond which wages rise significantly faster than productivity. Clearly, the region is close to that inflection point today (in late 2017, the unemployment rate was half a percentage point below the neutral rate), but the recovery still has some traction to gain before one can expect sustained wage pressures. 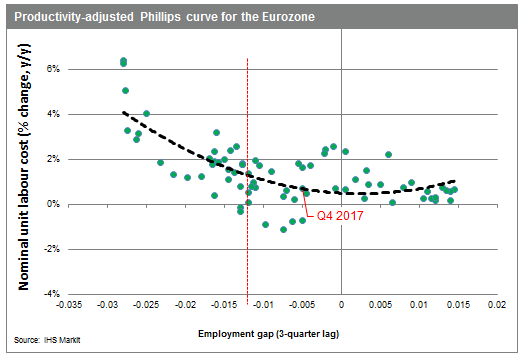 While some analysts believe that an acceleration of wage growth is just around the corner, others see limited prospects for a stronger recovery. Germany is among the most obvious candidates in Western Europe for stronger salaries. Indeed, the wage moderation that has characterized the country since the reforms of the 2000s appears to be ending, as heightening labor shortages give trade unions increased bargaining power. In early 2018, new, higher salary agreements were reached in a number of key sectors. Outside of Germany, however, most Western European countries may see a slower acceleration of wage growth, especially where unemployment remains elevated.

While IHS Markit expects that most EU countries will see at least moderate growth in nominal wages over the medium term, downside risks exist. Looking ahead, efforts to improve the business environment and raise productivity will be especially important in boosting wage growth. Although many companies were reluctant to invest amid the crises of recent years, productivity could be raised through investments in machinery, human capital, and public infrastructure. Nevertheless, some observers fear that wage growth could be permanently diminished as technological development and outsourcing threats reduce workers' bargaining power and boost investment in capital.