Our COVID19 country vulnerability index measures the potential disruption of economic, political and operational activity as a result of the virus. It combines country-level measures of vulnerability such as capacities of health systems, the demographic structure of society and trade openness with measures of resilience such as effectiveness of the state and fiscal capacity. The index assesses general country-level vulnerability and does not take current mitigation measures or COVID19 cases into account.

The COVID19 vulnerability index consists of four components. The first one is economic vulnerability, which measures trade exposure, government balance and to a lesser extent the share of self-employed in the labour force. Trade is expected to slow down dramatically because of the huge negative shocks to supply and demand in almost all countries and sectors. In addition, countries with an open economy rely heavily on international supply chains which may get disrupted due to the virus. The government balance measures whether countries are able to borrow in order to mitigate the COVID19 shock. It also captures the risk of a debt crisis due to excessive borrowing to respond to COVID19. The most vulnerable countries in this category that are characterized by high debt levels and/or large exposure to international trade are Malta, Ireland, Singapore, Luxembourg and Hong Kong.

The second component of the index is the risk of state failure. This assesses the capacity of a state to effectively respond to a crisis and is quantified by using a score based on IHS Markit country analysts' analysis. Failed states such as Afghanistan, Yemen and Somalia are most vulnerable in this regard.

Thirdly, we take the quality of the healthcare system into account. We use death rates due to pneumonia as a proxy for the ability to treat respiratory infections. In addition, we measure hospital equipment and public health expenditure as share of total government spending. Countries with well-funded systems and well-equipped facilities such as Japan, South Korea and Germany are the least vulnerable in this category.

Economic vulnerability, risk of state failure and the quality of the healthcare system are the most influential components in the index. Information on demographics also influences the overall vulnerability score, although is given less weight in the calculations. The demographic component of the index measures the share of population living in densely populated areas (more than 1,000 people per square km) and the demographic structure of the population (population per age group weighted by the normalized case fatality rate by age group). A high share of the population living in densely populated areas increases the risk of transmission of the virus and thus makes the population more vulnerable. Fatality rates differ hugely across age groups. Mortality rates are therefore expected to be higher in aging societies than in societies with large youth cohorts. Given their relatively larger elderly cohorts Japan, Singapore, Italy, and Spain rank higher in the demographic vulnerability component within the index, although that is somewhat mitigated within the index due to the relative strengths of their respective healthcare systems. 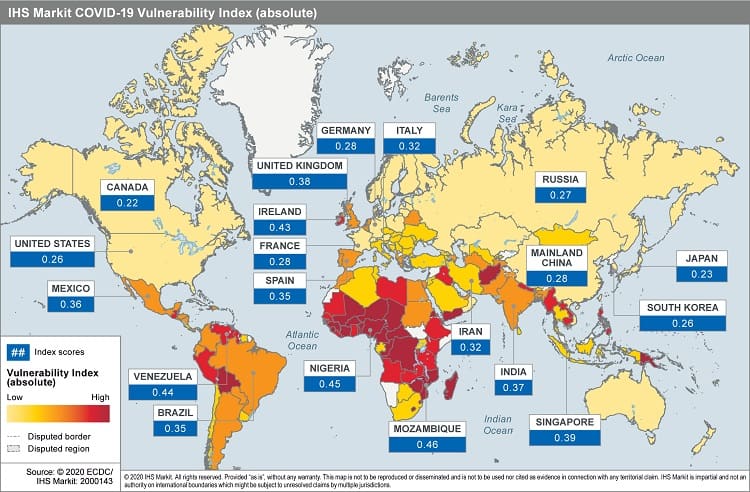 Among the most vulnerable countries in our index are Mozambique and Nigeria. Both have extremely weak health systems and among the highest death rates due to pneumonia (95 per 100,000 individuals in Mozambique and 93 in Nigeria - compared to only 16 in the US). In addition, Mozambique is highly vulnerable due to its high share of external debt (90% of GDP) and Nigeria due to its weak state capacity (the risk of state failure is considered "high").

Another country at the top of the index due to weak state capacity is Venezuela. Despite the 2019 uprising attempt led by the head of the National Assembly Juan Guaidó and widespread anti-government protests president Nicolás Maduro remains in control of all government institutions. The ability of the government to organize an adequate response to the crisis and to communicate effectively is limited.

Ireland ranks high in the vulnerability index because of its high economic vulnerability. It has one of the highest external debt levels (740% of GDP) and is extremely exposed to international trade (imports amount to 99% of GDP and exports to 130%).

The United Kingdom is also in the top group of vulnerable countries due to its demographics and institutional instability. 69% of the population lives in high density areas and COVID19 mortality rates are expected to be high in its aging society. Political uncertainties due to Brexit and the polarization of politics have increased the risk of state failure (currently "elevated" on the IHS risk scale).

While Singapore's response to COVID19 has been very successful to date it ranks in the top group of most vulnerable countries due to its economic openness and its demographics. The entire population lives in a highly densely populated area and thus the risk of infection is extremely high even if only a small number of people is infected. Singapore's external debt amount to 450% of GDP and its economy is very open (imports constitute 150% of GDP and exports 175% of GDP).

At the bottom of the vulnerability ranking we find countries like Canada, Japan and Germany. They all have a well-functioning central governments and high health system capacity. Canada stands out due to its high state capacity and low trade exposure (both imports and exports account for only 30% of GDP). While Japan is one of the most vulnerable countries in terms of demographics - high concentration of population in densely populated areas and old age structure - it is economically very resilient. Imports and exports account for only 16% of GDP and its external debt share is only 80% of GDP, which is lower than for most other developed countries. Germany has one of the lowest pneumonia death rates (11 per 100,000 individuals) and has among the largest share of acute care hospital beds (6 per 1000 population). 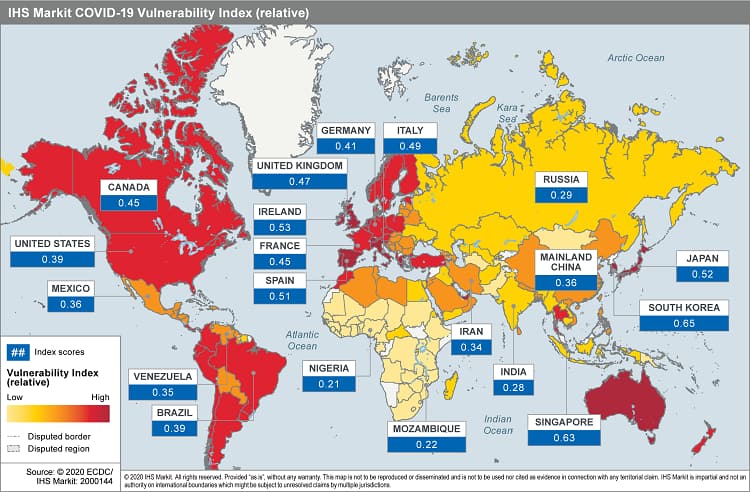 Excess mortality measures the additional mortality shock that a country might experience due to COVID19 - over and above baseline mortality.

Nigeria or Angola, in turn, with a young population and high baseline mortality rates could experience 30% - 40% additional deaths due to COVID19.

We believe that excess mortality is an important measure for the vulnerability of a country because in takes into account whether countries are used to dealing with high mortality rates. It also measures cultural resilience to tragedy and thus the ability to cope with shocks such as COVID19 better.

Learn more about our index

Low mortgage interest rates fuel homebuilding in the Mountain West and South; the labor market continues its slow a… https://t.co/1pEhb0NBpS

This week’s highlight is the Ant Group IPO in Shanghai and Hong Kong, priced to raise a record USD34.4 billion.… https://t.co/qjwVeIsk8l

RT @bencasselman: Of course, we probably will get some monthly spending growth. But perhaps not much. @EconomicsRisk is forecasting 1.3% gr…

A new constitution for Chile is likely to increase the role of the state in the economy, particularly in the provis… https://t.co/GqbsKSxpWd