The October 25, 2011 edition of The New York Times included an article focusing on the contrasting directions in which the two Swedish automakers are going. An excerpt reads:

"The Saab facility in (Trollhattan) is silent, save for workers who drop by once a week to perform light maintenance or cleaning to stay busy. Just 62 miles to the south, in Gothenburg... the contrast is stark. There, Volvo is operating two shifts, churning out 54 cars an hour from early morning until midnight."

While Saab struggles to stay alive, Volvo has shown signs of improvement in the U.S. new vehicle market. Its retail registrations through the first eight months of 2011 are up 28% versus a year ago, a greater improvement than that of any European volume premium make and far more than the overall premium market improvement of 5.8%. (Ironically, the premium make with the greatest year-over-year rise is Saab, which had dismal sales in 2010 and is benefitting from the 2011 launch of the 9-4X, a midsize crossover based on the Cadillac SRX platform.) Volvo's year-over-year gain is almost twice that of BMW, nearly three times that of Audi and close to four times that of Mercedes-Benz. Also, Volvo's share of the U.S. premium retail market has climbed one percentage point to 5.2% this year. 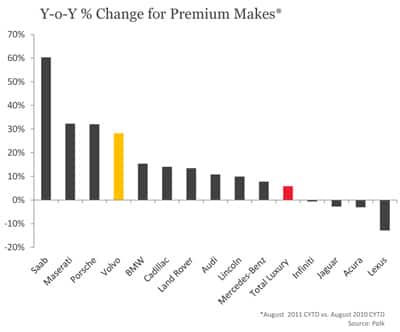 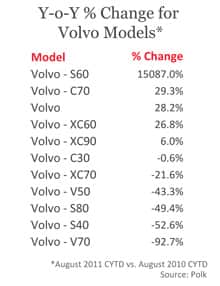 However, this is one of those situations in which the data can be somewhat deceiving. While Volvo's registrations this year are in fact way up versus 2010, a key reason is that 2010 deliveries of the S60, one of Volvo's core models, were almost non-existent because of the changeover to the redesigned version. So, with the huge year-over-year jump in S60 deliveries, this model - and Volvo - are just getting back in the game, so to speak, and not outpacing it.

As Volvo moves forward, it faces at least one fundamental challenge. Volvo's core differential advantage (safety) has been communicated and nurtured consistently for decades, and is under attack by several formidable competitors. Because retail customers are now embracing safety features, OEMs are adding more and more of them. A vehicle that illustrates this trend is the re-designed 2012 Mercedes-Benz M-Class, now coming to market and filled with safety technology. A recent M-Class advertisement boasts,

"In a fraction of a second, 'the M-Class' can check blind spots, scan the road for trouble ahead and alert you if it detects that you're drowsy. In the time it takes to read this ad, it will have performed more active safety measures than some cars will in their entire lifetime." (Source: Wall Street Journal, September 7, 2011, page A7)

Volvo will need to protect its safety message by staying in front of its competitors in this area. The Volvo City Safety system, standard on the S60 and capable of stopping a car automatically if a low-speed collision is imminent, is an example of the type of leading-edge, exclusive safety technology needed to keep Volvo in a leadership position in the area of safety.