One of Volkswagen of America's first steps along the path to selling one million units (VW and Audi combined) in the U.S. by 2018 was to launch a re-designed, and much less expensive, Jetta last year as a 2011 model. Since its launch, Jetta registrations have skyrocketed, climbing almost 61% during the first two months of this year over a year ago. The Jetta two-month registration total of 20,272 represents 57% of all Volkswagen retail registrations, a far higher mix than for any other Volkswagen model (and much higher than the Jetta's year-ago mix of 44%). 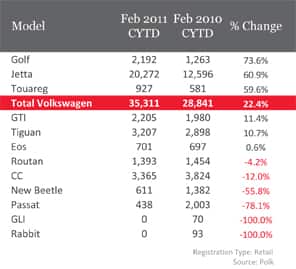 These Jetta results, though, imply a related underlying challenge facing Volkswagen. While the Jetta has been climbing, most other Volkswagen cars, including the CC, New Beetle and Passat, have been retreating. In fact, each is off in double-digits in the first two months of the year. Although the new Beetle and Passat are in the process of being replaced, the fact that they are 50% off is still cause for concern. The decline of all Volkswagen cars other than the Jetta is so substantial that Volkswagen car registrations in January and February are up just 25% versus a 32% rise of industry-wide car registrations. Fortunately, Golf registrations are moving in the right direction, though this model's volumes remain low.

As the next generation Beetle and Passat come to market, Volkswagen will need to build their volumes while holding as much Jetta business as possible. Only by growing all three car lines can Volkswagen hope to reach its ambitious goal of 800,000 Volkswagen-badged unit registrations by 2018, which is part of the company's global ambition to become the number one OEM worldwide by the same time.

The #auto supply is now held back by disruptions in testing and packaging. With imbalances between #semiconductor s… https://t.co/RUqAfngREk