VLCC Rates: Is the impact of Additional War Risk Premiums (AWRP) over as seasonality proves stronger?

July is a typically poor month for the VLCC segment, with activity slowing down across all major exporting regions. There has been limited optimism for the Middle East Gulf rates since the beginning of the month, with most cargoes to be loaded over the next couple of decades having already been fixed. Charterers have not yet started to work on August fixtures, presumably as part of a successful effort to offset the increasing insurance costs, the Additional War Risk Premiums (AWRP) to transit the Strait of Hormuz which were earlier expected to push the spot rates much higher for longer.

According to the Baltic Exchange, TD3C (Middle East Gulf to China) has dropped from marginally below WS 50 to WS 45 during the last couple of weeks, suggesting that the impact of the tanker attacks in the Gulf of Oman might be over. Rates were pushed back to levels last seen in the first half of June. Several of the deals fixed recently referred to discounted tonnage, with majors in China and South Korea taking advantage of the current conditions by taking ships at lower rates for voyages in late July. A good example has been the "NEW DYNASTY", which will load cargo on 24 - 26 July from Middle East Gulf to China, for CNOOC, at WS 40.5. 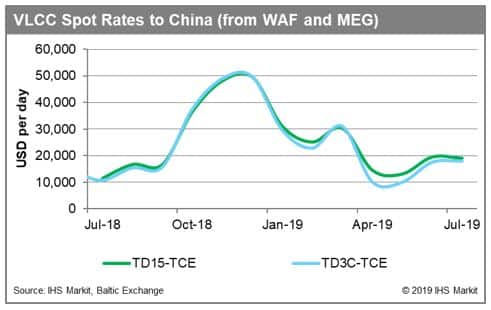 Competition among shipowners has been strong, as securing any employment is usually the target during this month. Demand doesn't seem to be sufficient to absorb the supply concentrated in the region, with Unipec and SK still fixing for this month. The market doesn't expect rates to be boosted over the coming weeks, with the sentiment starting to affect the current rates. There is no sign of an August relief for shipowners in the horizon, with seasonality suggesting that rates could be pushed closer to this year's lowest levels.

Meanwhile, booking a VLCC to carry cargo from West Africa to West India still costs around 3.2 million USD, with only a few charterers still looking for tonnage in July. Similar situation for cargoes heading to China, with rates standing close to WS 46.5. 10 VLCC loadings in West Africa have already been fixed for August's first decade. Despite the relevant lack of demand, shipowners remain resilient to accept lower rates. Ships earned a bit more two weeks ago when voyages to China were paid around WS 48. This has been supported so far by the rather stable activity in the US Gulf as well, which is however expected to feel the disruption of the Tropical Storm Barry, which has been moving towards the southern coast of the state of Louisiana. Roughly 3.3 million barrels per day of crude capacity could be affected during this period of heavy rainfall throughout the US Gulf Coast. 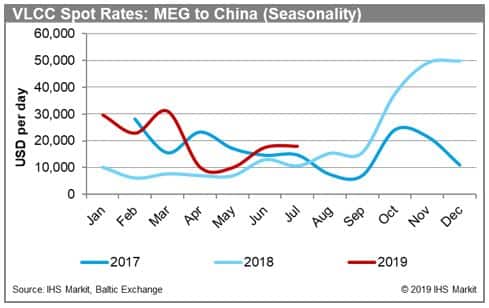