Vietnam intends to prioritize grid enhancements, renewable integration, and significantly increase its renewable energy target in the upcoming Power Development Plan 8, due to be finalized later this year. Alongside the increased target, the government has made clear its intention to shift away from feed-in-tariffs (FITs) to tenders, following the success in spurring on solar development in 2019 and a strong project pipeline for wind. The government had intended to have the first solar tender and pilot direct power purchase agreements (PPAs) in 2020, however owing to the coronavirus (COVID-19) disease 2019, it is now unclear if it will take place as originally scheduled.

The power sector liberalization journey is still ongoing in Vietnam, with full implementation of the competitive wholesale electricity market and the retail market planned for 2021 and post-2023, respectively. These markets will be the future for solar development. The Vietnam government will likely rely on solar tenders for the next five years, before gradually letting solar develop on a merchant basis, as Vietnam remains committed to liberalizing the power sector and reaching its renewable targets while avoiding an increase in the cost of power. The upcoming government tenders will drive prices lower, potentially converging to a range below the average levelized cost of electricity (LCOE) of solar in the country, even as the LCOE continues to decrease. The gap between the LCOE and wholesale market's system marginal price (SMP) will narrow significantly over the next five years. 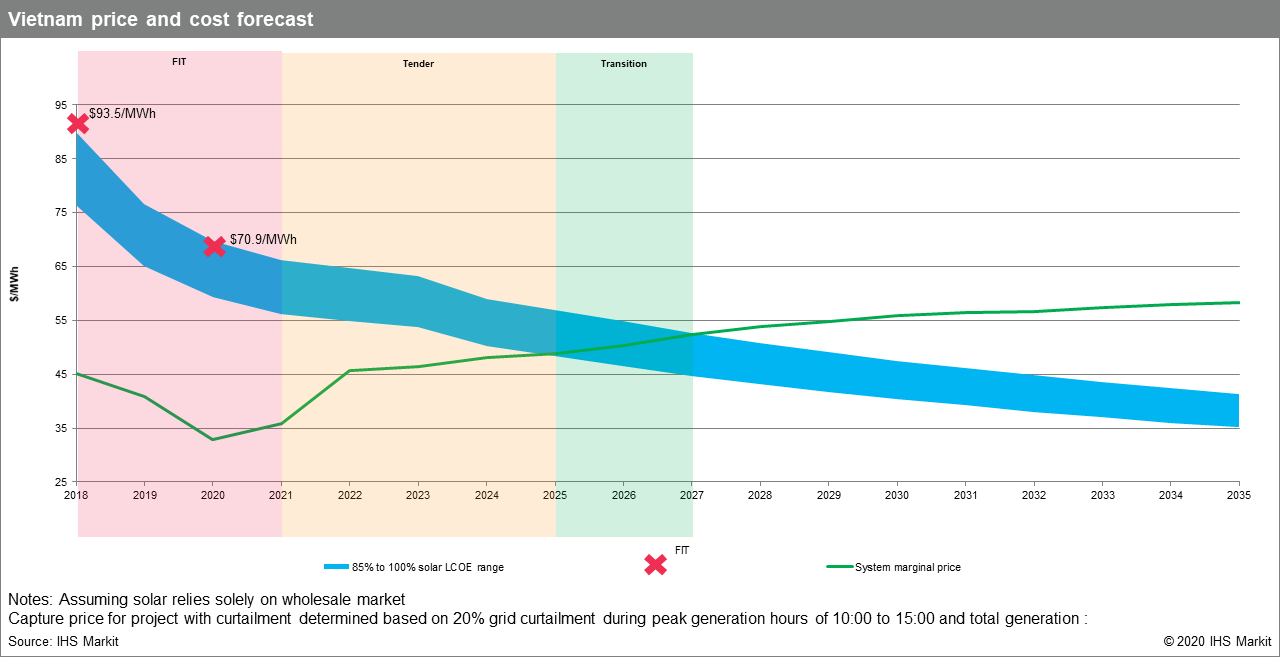 Curtailment issues faced by solar projects need to be solved before a successful transition can occur. The curtailments are likely to persist over the short-to-medium term. This is due to four reasons; first, Electricity Vietnam lacks capital to mobilize all necessary enhancement programs, second, transmission and distribution enhancements typically take between two and five years or more depending on scale and complexity, while the development of a renewable project can be completed in 12 to 18 months, third, the development of renewable capacity will continue particularly in the central and south regions, fourth, in addition to renewables there are also planned gas and liquefied natural gas-fired projects that will be developed in the same regions.

If left unresolved, there will be a slowdown in project development, as solar captured price after accounting for curtailment will only fall below the LCOE by 2032. In addition, solar development cost will rise due to greater competition for land with available grid connection points, siting of projects in lower solar irradiance areas, and an increased need for in-depth and longer-term grid integration studies.

Learn more about our power research in South and Southeast Asia.

IHS Markit experts are available for consultation on the industries and subjects they specialize in. Meetings are virtual and can be tailored to focus on your areas of inquiry. Book in a consultation with Allen Wang and Joo Yeow Lee.