Vietnam has been one of the most resilient economies in the Asia-Pacific region to the shockwaves from the global COVID-19 pandemic. Vietnam is expected to be one of the few major Asian economies that will show positive growth for the 2020 calendar year.

Vietnam's export sector, which is a key driver of GDP growth, has also shown moderate positive growth during the first ten months of 2020 despite the economic shocks in key export markets, notably the US and EU.

However, Vietnam's large and rising bilateral trade surplus with the US has resulted in increasing trade tensions with the US. In October 2020, the US launched an official investigation into acts, policies, and practices by Vietnam that may contribute to the undervaluation of its currency and the resultant harm caused to US commerce.

Vietnam's economy moderates due to COVID-19 but avoids recession

Vietnam has been one of the world's fastest growing emerging markets in the past decade, boosted by strong foreign direct investment inflows into its manufacturing sector. The pace of economic growth slightly exceeded 7% in both 2018 and 2019. Rapid growth of manufacturing exports and large new inflows of foreign direct investment have been important growth drivers for Vietnam, notably driven by rapid expansion in the textiles and electronics sectors. Total electronic and electrical manufacturing exports accounted for 33% of total merchandise exports in 2019, with textiles, clothing and footwear accounting for a further 19.4%.

Total foreign direct investment inflows reached USD 20.4 billion in 2019, up 6.7% year-on-year (y/y), driven by strong investment by multinationals in establishing new manufacturing production facilities in Vietnam. Samsung has been a key investor, with total foreign direct investment into Vietnam of around USD 17 billion in the decade to 2018. Vietnam has consequently become the biggest foreign production hub for Samsung Electronics, which booked USD 66 billion of sales in 2018 out of its Vietnamese operations, which was equivalent to around 28% of Vietnam's GDP. Around 50% of Samsung's smartphones and tablets are produced in Vietnam and exported globally. Samsung Vietnam has also built its largest R&D centre in Southeast Asia near Hanoi.

However, economic growth momentum has moderated significantly in the first nine months of 2020, due to the impact of the COVID-19 pandemic. For the January to September 2020 period, the Vietnamese economy grew by 2.12% y/y, compared with a 7.1% GDP growth rate in calendar 2019. Vietnam's GDP rose by 2.62% y/y in the July-September quarter of 2020, improving on the 0.39% y/y pace recorded in the April to June quarter. Despite the moderation in growth momentum, Vietnam is expected to be one of the very few industrial economies in the Asia-Pacific region that will record positive GDP growth in 2020. IHS Markit estimates that the Vietnamese economy will expand at a pace of 2.2% year-on-year in calendar 2020.

The Vietnamese manufacturing sector returned to growth in September as concerns around the latest outbreak of new COVID-19 cases in the country during July and August eased. Both output and new orders increased in September, according to IHS Markit's PMI data, while business confidence strengthened. The October surveys saw a continuation of expansion in the Vietnamese manufacturing sector, as the COVID-19 pandemic remained under control domestically.

The IHS Markit Vietnam Manufacturing Purchasing Managers' Index™ (PMI®) posted 51.8 in October, down marginally from 52.2 in September but still signalling expansion in the manufacturing sector and representing a substantial recovery from April's record low of 32.7. The latest survey showed improving operating conditions in the consumer and intermediate goods sectors. However, investment goods firms posted a deterioration, amid further declines in both output and new orders. 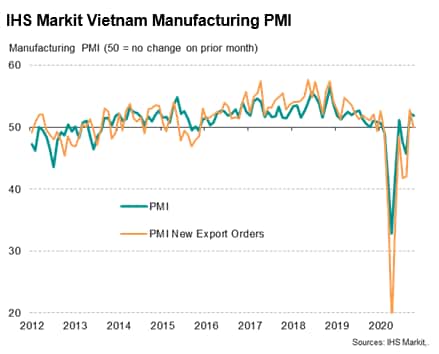 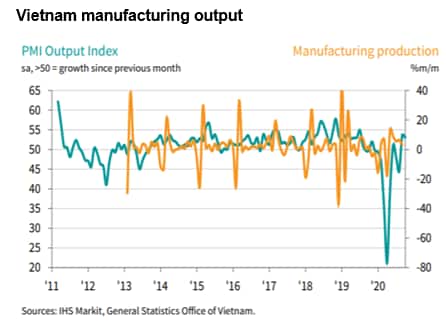 Reflecting Vietnam's success in limiting the domestic spread of COVID-19 cases during the first ten months of 2020, retail sales of goods and services rose by 6.1% y/y in October.

Although Vietnam's merchandise exports have been very resilient in the first ten months of 2020, exports of tourism services have collapsed due to the impact of international travel bans, including Vietnam's own ban on international travel. The tourism economy had been growing strongly in recent years, with international tourist visits to Vietnam in 2019 having reached 18 million trips, up 16% y/y. The protracted disruption of international tourism will hit Vietnam's service sector exports badly, but the impact on the overall tourism economy is mitigated by the significant contribution of domestic tourism to the overall industry.

A key factor that has driven the sustained strong growth of Vietnam since 2010 has been the rapid growth of electronics manufacturing. The importance of Vietnam's electronics industry has risen dramatically over the past decade, with the electronic industry's share of total GDP rising from around 5% in 2010 to around one- quarter of GDP by 2019, a key factor helping to drive rapid growth of both exports and GDP.

With electronics now being Vietnam's most important export sector, the impact of global lockdowns due to the pandemic on the global electronics industry had been a major shock to the sector during the first half of 2020. Amid widespread global lockdown measures aimed at containing the spread of the pandemic, world demand for electronic goods slumped sharply in April and May.

However, since the low points in April and May, the IHS Markit Global Electronics PMI has showed significant improvement, with the headline index rising to 51.1 in September 2020, the first expansion for ten months. 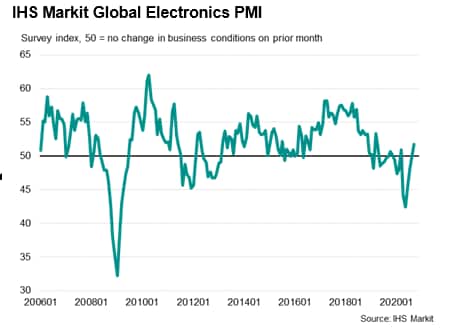 The Global Electronics PMI's output index (which measures changes in production) returned to positive territory, reaching 50.7 in September, indicating slight expansion. This is in comparison with severe contraction in April, as reflected in the index reading of 33.9 for that month. 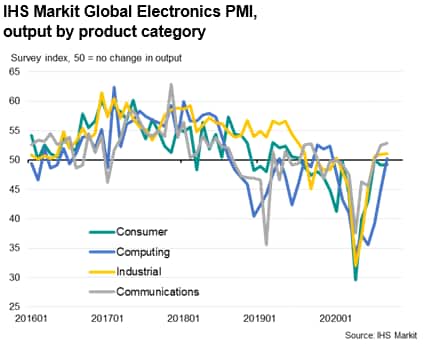 Vietnam's exports from phones and components reached USD 36.7 billion in the first nine months of this year, posting a year-on-year decline of 5.5% and accounting for 18.1% of Vietnam's total export revenue. While the overall year-on-year decline reflects the impact of global lockdowns during H1 2020, the rebound in retail sales in key markets such as the US and EU since mid-2020 is expected to result in improving exports of phones and components for the second half of 2020 and during 2021. However some near-term volatility in exports is expected due to the impact of new lockdowns in some key markets due to renewed waves of COVID-19 cases.

Meanwhile exports of personal computers and related products rose strongly in Q3 2020, up by an estimated 20% y/y, as the global shift to remote working boosted demand for personal computers. Vietnam has significantly increased its share of global exports of computers in the past five years and is now competing with China in terms of the total export value of computer products.

In the near term, Vietnam's exports are expected to strengthen in 2021, as key export markets, notably the US and EU, roll out COVID-19 vaccines, allowing a gradual recovery in economic growth momentum. This is expected to support a recovery in new orders for key Vietnamese exports such as garments and electronics.

Over the medium-term outlook for the next five years, a number of key drivers are expected to make Vietnam one of the fastest growing emerging markets in the Asian region.

For example, the Japanese government has introduced a subsidy program in 2020 for Japanese companies to help reduce supply chain vulnerability by relocating production out of China either back to Japan or to certain other designated nations. The Japanese government has allocated an estimated 220 billion yen for the supply chain reshoring program in Japan's supplementary budget for the 2020 fiscal year, equivalent to around USD 2.1 billion. An additional 23.5 billion yen were allocated for supply chain diversification to other selected countries, which includes ASEAN, India and Bangladesh. Vietnam has been one of the preferred destinations for Japanese firms choosing to shift their production to the ASEAN region in the first round of subsidy allocations announced by the Japanese government.

The EVFTA is a key new free trade agreement that will boost Vietnam's exports and foreign direct investment inflows. The EVFTA is an important boost to Vietnam's export sector, with 99% of bilateral tariffs scheduled to be eliminated over the next seven years, as well as significant reduction of non-tariff trade barriers. For Vietnam, 71% of duties were removed when the EVFTA took effect on 1st August 2020. The scope of the EVFTA is wide-ranging, including trade in services, government procurement and investment flows. An EU-Vietnam Investment Protection Agreement has also been signed which will help to strengthen EU foreign direct investment into Vietnam when it is implemented.

Vietnam will also benefit from the Regional Comprehensive Economic Partnership (RCEP) free trade agreement that is expected to be signed by 15 RCEP member countries by the end of 2020. The fifteen RCEP countries that are expected to sign the agreement are the ASEAN ten nations, plus China, Japan, South Korea, Australia and New Zealand. The RCEP agreement covers a wide range of areas, including trade in goods and services, investment, e-commerce, intellectual property and government procurement.

The US deficit for trade in goods with Vietnam reached USD 55.8 billion in 2019, with the deficit widening by 41.2% compared to 2018. This was slightly mitigated by the USD 1.2 billion surplus in favour of the US for trade in services, but still left the overall bilateral trade deficit at USD 54.5 billion in 2019. In the first nine months of 2020, the US deficit with Vietnam for trade in goods has remained at similar high levels, reaching USD 49.5 billion.

Reflecting the persistent large bilateral trade surplus that Vietnam has with the US, the Office of the US Trade Representative (USTR) announced on 2nd October that the US government has launched an official investigation into acts, policies, and practices by Vietnam that may contribute to the undervaluation of its currency and the resultant harm caused to US commerce, under section 301 of the 1974 Trade Act.

As part of its investigation on currency undervaluation, USTR will consult with the US Department of the Treasury as to issues of currency valuation and exchange rate policy. The US Treasury has informed the US Department of Commerce that Vietnam's currency was undervalued by 4.7% in 2019, partly due to intervention by the Vietnamese government.

USTR has also launched an investigation into Vietnam's acts, policies, and practices related to the import and use of timber that is assessed to be illegally harvested or traded.

The Vietnamese economy is expected to rebound in 2021, with GDP growth expected to strengthen to a pace of 6.1% y/y. Over the medium-term economic outlook, a large number of positive growth drivers are creating favourable tailwinds, continuing to underpin the rapid growth of Vietnam's economy. This is expected to drive strong growth in Vietnam's total GDP as well as per capita GDP.

Vietnam's role as a low-cost manufacturing hub is also expected to continue to grow strongly, helped by the further expansion of existing major industry sectors, notably textiles and electronics, as well as the development of new industry sectors such as autos and petrochemicals.