Vietnam’s draft PDP VIII confirms the market’s expectation of large renewable capacity additions, targeting 127 GW by 2045, but the challenges posed by it are still not well addressed

Vietnam's Ministry of Industry and Trade issued the draft of the eighth power development plan (draft PDP VIII) in February 2021, illustrating the road map of Vietnam's power sector development until 2045. What is clear from the first published draft is the focus on continuously exploiting the renewable resources in Vietnam through significant increases in planned renewable capacity additions and grid and power system enhancements to facilitate the sizable increase in intermittent generation.

Draft PDP VIII features an increase of nearly 70% in the renewable capacity target from the revised power development plan VII (PDP VII, published in 2016), from 27 GW to 45 GW by 2030. In the longer term, it targets 127 GW of renewable capacity by 2045, with solar photovoltaic (PV), onshore wind, and offshore wind accounting for 43%, 31%, and 17%, respectively. There is a strong shift toward wind capacity additions, whose share of the renewable target has nearly doubled for 2030 and more than doubled by 2045. In contrast, solar only features a 2 GW increase from 2020 to 2030, followed by a 36 GW increase between 2030 and 2045.

The key implications from the draft PDP VIII on renewable developments are summarized below.

There will definitely be a slowdown in solar capacity additions compared with 2020, but a sudden halt as illustrated in the draft PDP VIII is unlikely. This is due to commercial and industrial rooftop solar projects already not requiring full support of the pricing incentive to be economically viable, the likelihood of new feed-in tariffs and amid the expectation of rising power prices. This is in addition to a strong pipeline of rooftop projects and to a lesser extent ground-mounted solar projects that are already under construction.

IHS Markit currently forecasts slightly less than a gigawatt of solar capacity additions in 2021. Thereafter, there may be additional utility-scale solar growth if the government conducts its pilot solar auction as planned in the second half of 2021. The auction mechanism should continue to support more development while considering grid availability at prospective sites. This will be alongside a growing rooftop solar sector.

Vietnam is unlikely to achieve its target to upgrade its grid to a level in which the country's operating renewable capacity can be fully utilized by 2025. The National Power Transmission Company has long been facing challenges in mobilizing financial resources and managing the compensation for site clearance for construction. This resulted in delayed power grid enhancement for both 500 kV and 220 kV networks. These delays have occurred alongside the rapid increase in solar, especially in South Vietnam, and have resulted in many of the 220 kV and lower-voltage lines and infrastructure operating either at high load or being overloaded. This resulted in increased curtailment, as solar capacity continued to grow. Owing to the longer time required for transmission development compared with renewable projects, it will take several years for the grid capacity enhancements to catch up to the current renewable capacity. The grid enhancements will continue to lag the additional wind capacity that will be coming online in 2021 and planned over the next few years in Central and South Vietnam.

The government recognizes that EVN alone will be unable to meet the investment requirements and has already put in place the mechanism for a public-private partnership to attract non-EVN entities to invest in the construction of transmission infrastructure. However, third-party financing of these projects will be challenging owing to the lack of an established mechanism to socialize the cost for shared transmission infrastructure to socialize the cost among all parties that share the connection. This mechanism will take some time to be developed, and therefore the strain on EVN's finances will persist in the near term, which will be detrimental to meeting the N-0 criterion to utilize all the installed renewable capacity by 2025 target.

The planned flexible generation capacity additions alone are insufficient to deal with the proliferation of these intermittent sources in the near term. Unlike earlier versions of the power development plan, the draft PDP VIII has explicitly decided to add flexible generation, as the government plans to continue the pace of growth of the country's intermittent renewables. The plan is to add flexible generation from single-cycle gas turbines, internal combustion engines, batteries, or hydro storage to better react to the intermittency of solar and wind generation. However, in the near term, the planned flexible capacity (600 MW by 2025 and 2,600 MW by 2030) is nowhere close to the IHS Markit estimate of flexible capacity requirements of between 6 GW to 7 GW, based on draft PDP VIII's planned renewable capacity.

As a result of the shortage of purpose-built flexible generation in the near term, Vietnam will need to rely on the existing generation capacity to provide the flexibility. The baseload coal and gas generators in those regions will suffer lower utilization rates, lower efficiency, higher emissions, higher cost of operations and maintenance. In addition, the cycling of generators to manage the fluctuating renewable generator will be an increasingly challenging role for existing gas generators, as the fleet is already relatively old, averaging 15 years. 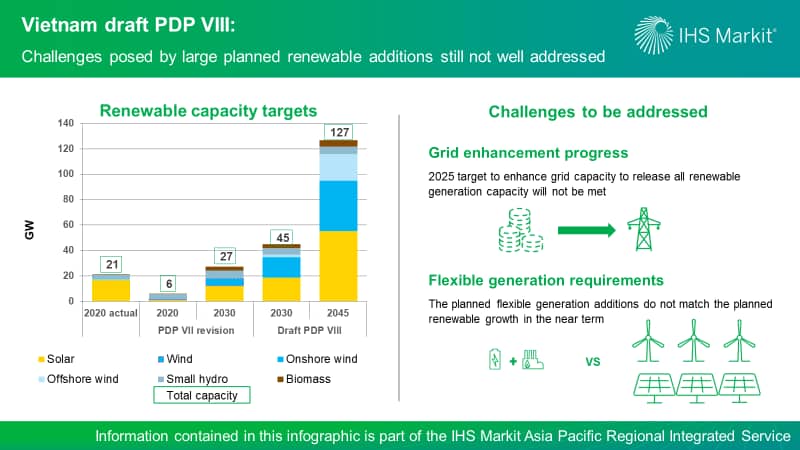 Allen Wang is a director on the Climate and Sustainability team at IHS Markit, leads Southeast Asia power and renewables research, and is the research lead of the Asia Pacific regional integrated service.

Joo Yeow Lee, an associate director with the Climate and Sustainability team at IHS Markit, covers the power and renewable markets in Southeast Asia.