According to President Trump, "Trade wars are good, and easy to win". But whatever the impact on the US and Chinese economies from their current trade spat, Vietnam is often touted as the country most likely to benefit [1]. However, while the Vietnamese economy does indeed continue to perform well amid positive trade numbers, latest PMI data suggest that no country can really be immune from a downturn in global trade.

Vietnam's export performance has been strong so far in 2019. Exports were up again year-on-year in August, following the sharpest increase in 11 months during July. The official numbers back up the picture signalled by IHS Markit's PMI data, with data for August pointing to a forty-fifth successive monthly expansion of new export orders. 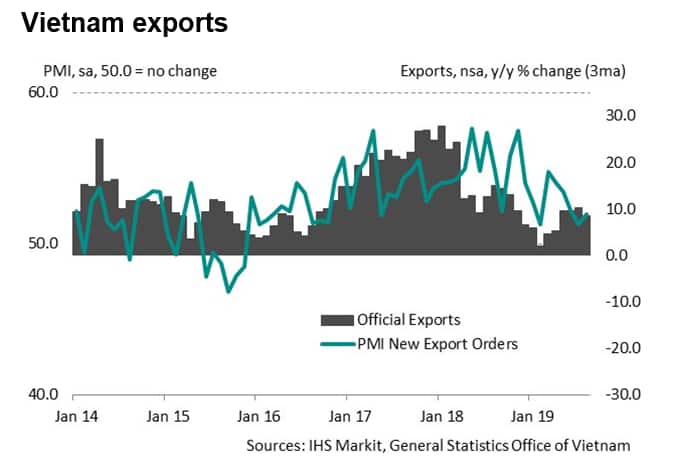 Vietnam has been one of the better performers in terms of export orders of the 28 manufacturing PMI surveys conducted by IHS Markit for which exports data are available. When taking an average of the New Export Orders Index reading for January to July this year, Vietnam sits in third place, behind only Greece and India. 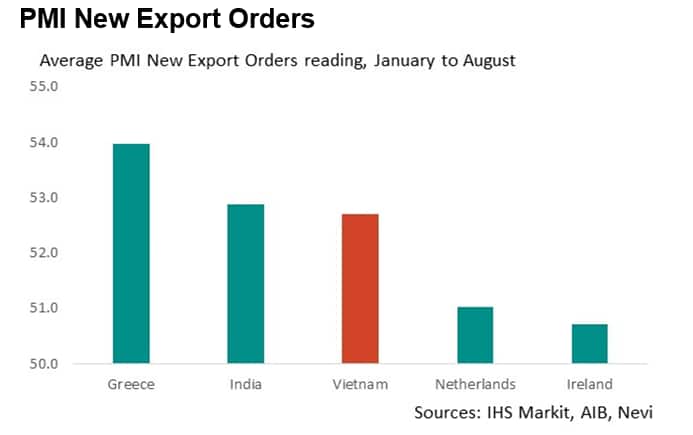 At least part of this strong export performance looks to be replacing trade between the US and China. While US imports from China over the first six months of 2019 were down 12.4% year-on-year, their imports from Vietnam were up 33.4%.

Similarly, when looking at some of the main goods that China exports to the US [2], Vietnam's recent performance in exporting those items has been much better than China's. 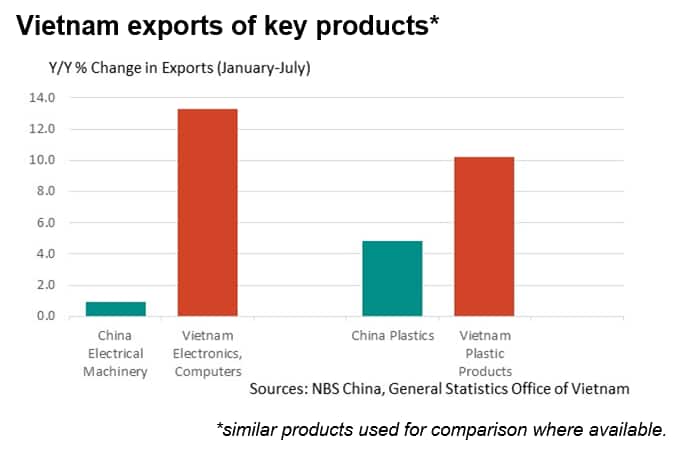 While the Vietnamese economy has generally performed well so far this year, the latest PMI data highlight the negative impact that falling global trade flows will have even on those best placed to avoid direct damage.

Although remaining in expansion in August, growth softened in the Vietnamese manufacturing sector as slower client demand and the impacts of the US-China trade tensions restricted growth of new orders and production. The latest rise in new orders was the weakest in seven months, while output growth was the slowest in the current 21-month sequence of expansion. Business sentiment also took a step back in the latest survey period.

Firms will hope that the softening of growth in August turns out to be a blip, and that rates of expansion will improve in coming months. However, the JPMorgan Global Manufacturing PMI has shown falling new export orders worldwide throughout the past year, with the latest contraction the fastest since October 2012. New work from export clients is thereby becoming harder to come by. As a result, while Vietnam may often be looked at as a potential gainer from the US-China trade tensions, this may just turn out to be because they lose less than others. 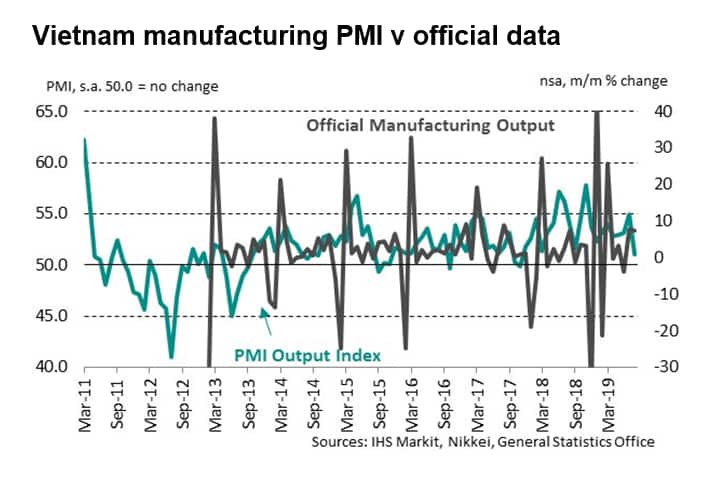 [2] Based on information from the Office of the US Trade Representative https://ustr.gov/countries-regions/china-mongolia-taiwan/peoples-republic-china