Vietnam GDP up strongly again in 2018 as manufacturing outperforms

"To reap a return in ten years, plant trees. To reap a return in 100, cultivate the people." Ho Chi Minh's thoughts on planning for the future are relevant today in Vietnam, where the economy seems in a perfect position to defy signs of slowing demand elsewhere and thrive in the global economy.

An increasing openness to foreign investment, a relatively stable economy and a surging manufacturing sector make the country an attractive location for international firms, an appeal which appears to have strengthened in recent months given worries about trade tensions and instability elsewhere.

Official estimates indicate that Vietnamese GDP rose 7.1% in 2018, the best result since 2007 and cementing the country's position as one of the fastest growing economies in the world.

The manufacturing sector continued to be the strongest segment of the economy in 2018, with output up some 13% from the previous year. 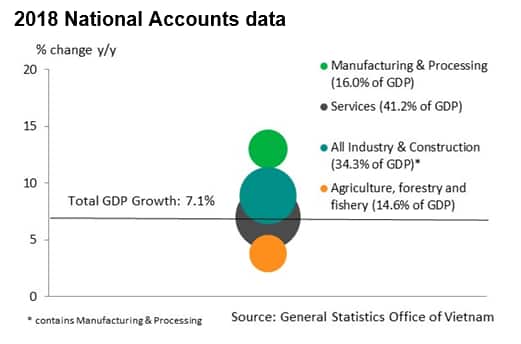 The official figures on manufacturing chime with the strength signalled by the Nikkei Vietnam Manufacturing PMI, compiled by IHS Markit. The survey saw output rise on a monthly basis throughout 2018, with the annual average for the headline PMI the highest since the survey began in 2011. 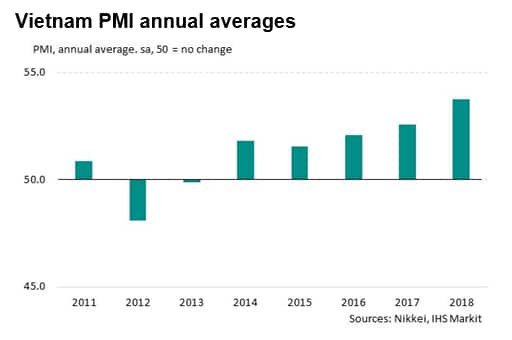 The annual average PMI reading for Vietnam in 2018 was also the highest of all countries surveyed in Asia. 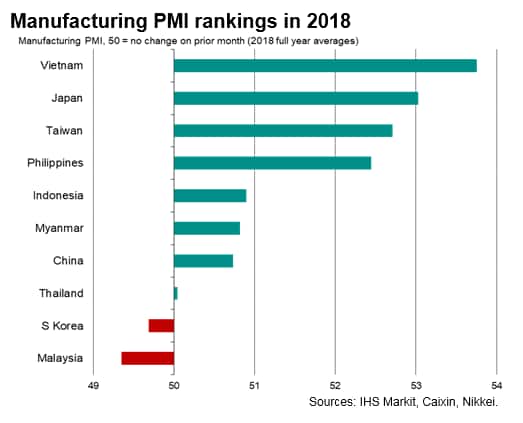 The Vietnamese economy looks set to continue to grow strongly during 2019, despite signs of weakness in the global economy: global economic growth slowed to a 27-month low in December.

While softer global growth and trade tensions are downside risks for the Vietnamese economy, a number of factors are likely to mitigate any negative outcomes. In recent years, the Vietnamese authorities have been gradually relaxing ownership rules of companies, notably by aiming to reduce the number of state-owned enterprises through privatisations and removing restrictions on foreign ownership of companies. This contrasts with difficulties in doing business elsewhere in the region, which makes Vietnam an attractive investment destination. For example, South Korean company Samsung's factories in Vietnam now produce almost one-third of the firm's global output [*].

Other positives for Vietnam include a relatively stable exchange rate at a time when other emerging market currencies have come under pressure after the US Federal Reserve embarked on a rate rising cycle. The Vietnamese dong moves in a crawling peg against the US dollar, and depreciated only modestly during 2018.

Relative currency stability also contributes to a lack of volatility in inflation and interest rates. Consumer prices rose 3.0% year-on-year in December 2018, below the central bank's target of 4.0% and therefore not putting any pressure on policymakers to raise interest rates. The latest PMI survey, meanwhile, signalled monthly reductions in both input costs and output prices in December as the Vietnamese manufacturing sector remains internationally competitive.

There are also signs that foreign multinational companies are relocating production and supply chains to Vietnam in the face of growing trade tensions between China and the US. 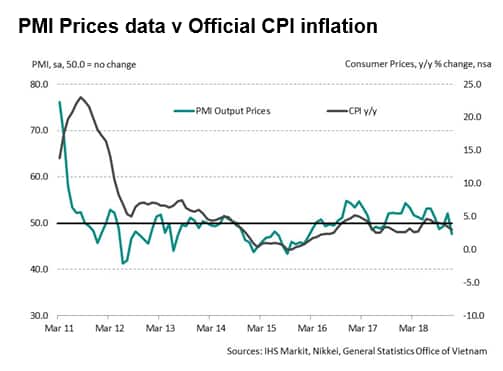 International competitiveness, a stable economic environment and an increasing openness to business therefore all place Vietnam in a good position to weather any global economic headwinds during 2019. IHS Markit forecasts a further strong rise in GDP of 6.7% for this year.