Venezuela's political crisis remains in stalemate. Escalating oil-sector sanctions imposed by the United States have contributed to massive declines in crude oil production, but the collapse of Venezuela's petroleum industry has not resulted in a political shift. President Nicolás Maduro appears to maintain full control of Venezuela's political, economic, and military apparatus nearly six months after Juan Guaidó, the president of the opposition-controlled National Assembly, announced that he was assuming Venezuela's presidency on an interim basis by invoking the constitution.

The IHS Markit Oil and Gas Risk scoring methodology captures Venezuela's process of petro-state failure: Since 2014, the country's overall score has fallen by almost half from an already low base score - an unprecedented decline that underscores our view that any eventual recovery will be prolonged. 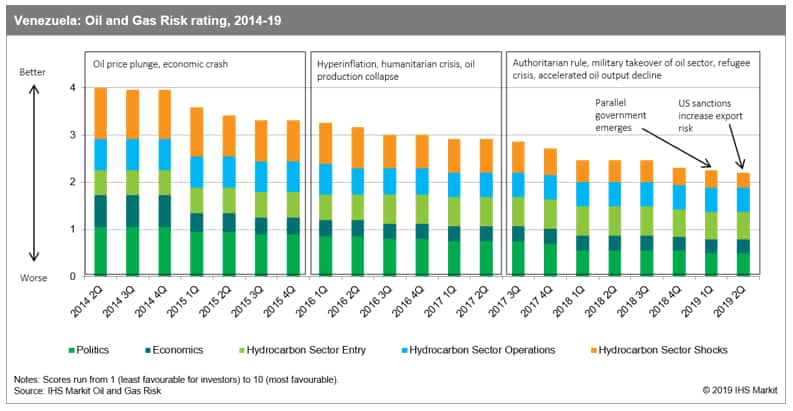 Quevedo's simultaneous use of aggression and incentives has continued through 2019. In the wake of US sanctions, PDVSA leadership has allegedly used opaque threats to compel partners to confirm that they will remain in joint ventures with the NOC. Meanwhile, PDVSA has reportedly negotiated favourable tax terms for a production license that it directly awarded to Russia's Rosneft in 2017 for the Patao and Mejillones offshore non-associated gas fields. This agreement marks another element of Rosneft's years-long contrarian strategy to extract concessions from Venezuela while expanding its presence in the country's petroleum sector amid worsening crisis conditions.

PDVSA also has reportedly offered to cut the royalty rate that Chevron pays to the government for its 30% stake in the Petropiar heavy crude upgrader project located in the Faja (Orinoco Oil Belt). Waivers to existing US sanctions on Venezuelan operations for Chevron and US-based service-sector companies Baker Hughes, Schlumberger Limited, and Weatherford International are set to expire on 27 July 2019. The looming deadline is likely driving the offer of improved fiscal terms in exchange for Chevron's request for a waiver extension.

The official use of hostility and inducement toward foreign E&P companies is expected to intensify amid a new phase of collapsing oil production. IHS Markit forecasts sharp declines in total crude oil production over the next 12 months, including key projects with foreign partners. US sanctions will likely have a material effect on curbing the supply of diluent used to dilute and upgrade volumes of its heavy crude for export. Anticipated US pressure on buyers of Venezuelan crude is expected to compound the crunch on Venezuelan production, exports, and associated oil revenues. As a result, Venezuela's crude oil production could fall below 500,000 b/d next year. 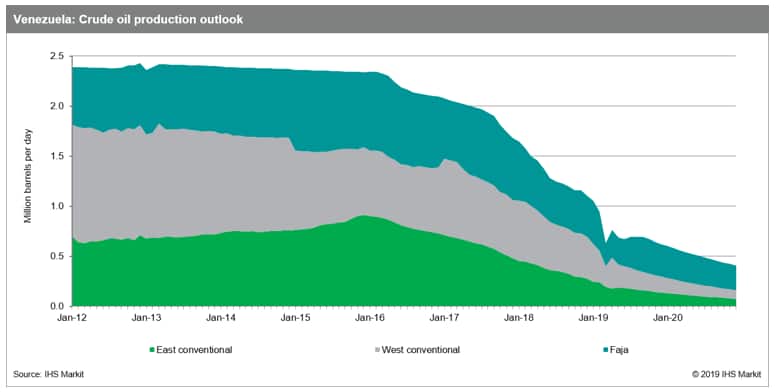 We expect that PDVSA leadership will offer expanded fiscal and contractual incentives - combined with the use of intermittent hostility - to companies in exchange for increased upstream investment. For companies taking a long view of the country, ingratiating themselves to the current military-backed government could enable them to expand their in-country foothold. However, this approach carries legal risks, as a future government could scrutinise investment agreements signed without the requisite approval of the opposition-controlled National Assembly, as specified by law.

E&P companies and service-sector providers that do not engage in industry cooperation with the current government - either of their own volition or due to international sanctions - will confront risks to their in-country assets. Indeed, the military leadership of Venezuela's hydrocarbon sector could invoke PDVSA's stipulation of replacing foreign partners who fail to meet their production requirements as justification to seize specific assets in the name of a national emergency.

Importantly, the aforementioned agreement with Rosneft reinforces the reality that even Venezuela's most strategic geopolitical allies are not immune to these risks: The agreement reportedly includes a clause stipulating that Rosneft be compensated per fair market pricing in the event of an asset expropriation.

From the perspective of the armed forces, taking control of foreign upstream assets could give them a strategic bargaining chip in any negotiations regarding a future power transfer. However, the fact that Venezuela lacks the finances and personnel to invest in boosting output from any seized upstream assets will represent a check on the extent to which the armed forces take this approach.

For foreign investors with confiscated assets, legal battles aimed at securing compensation would most likely last years, with diminished prospects of ever fully achieving recompense due to Venezuela's limited financial resources and a lengthy queue of aggrieved creditors.

Ford Tanner is a Principal Analyst at IHS Markit