Venezuelan production has faced an unprecedented decline in recent months, June 2018. Production is estimated at only 1.1 million barrels per day (MMb/d), which is a 280,000 barrel per day (b/d) or20% drop from the previous month and a yearly decline of 920,000 b/d (46%). The sanctions put in place by the Trump administration directly preceded the decline in production; however, they were simply the straw that broke the camel's back. The seeds of decline were sown in decades of heavy-handed political intrusion into the operations of Petróleos de Venezuela, S.A. (PDVSA), the Venezuelan state-owned oil and natural gas company. This interference began with the socialist leader Hugo Chavez, whose policies have continued and intensified under the rule of his protégé, current Venezuelan president Nicolás Maduro.

The decline in Venezuelan production clearly affected the crude slate of US Gulf Coast refiners in first quarter 2018. Several major refiners, built to process heavy crudes, have either reduced imports of Venezuelan crude or stopped imports all together. Refiners in China, India, and the United States have replaced the Venezuelan imports with a mixture of different crude types. In cases where they continue to accept Venezuelan crude, many refiners are requesting discounts to compensate for deteriorating crude quality, including unacceptable water and metal content, which is likely linked to operational problems at Venezuela's heavy oil upgraders.

Phillips 66's Sweeny refinery imported an average of 123,000 b/d of Venezuelan crude from 2012 through 2017, yet imported no Venezuelan crude in first quarter 2018 (see Figure 1). Instead, the refiner took to increasing Canadian imports, predominately heavy and light synthetic crude oil, and supplemented with Mexican Maya and Colombian Castilla. Similarly, the PBF Energy refinery in Chalmette, Louisiana, United States, began continuously importing Colombian Castilla in August 2017 and imported Mexican Maya every month during first quarter 2018. Citgo's US refineries in Corpus Christi, Texasand Lake Charles, Louisiana, have employed different tactics. Their Venezuelan crude imports remained flat, due to the refineries' physical proximity to PDVSA. However, both refineries took in 11 shipments below 40,000 b/d of various crudes, including Chad's Doba, Colombian Castilla, and Brazilian Marlim. 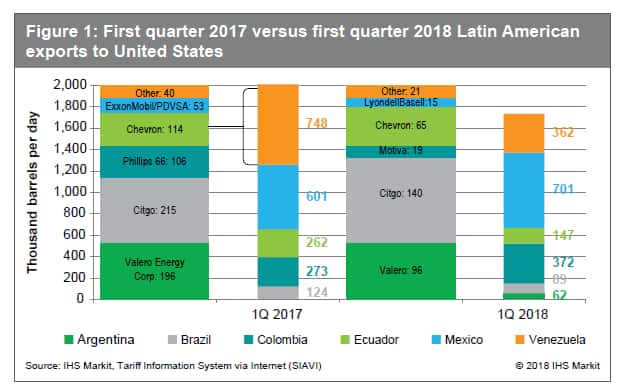 The Mexican and Colombian energy sectors are in a strong position to take advantage of the decline in Venezuelan crude. Mexican crude exports have remained relatively high, even while production continues to decrease because of the declining domestic refinery utilization rates, which has been below 40% since July 2017. Mexico exported 1.5 MMb/d of crude in February 2018, the largest volume since at least 2012, and shipped 833,000 b/d of that volume to the United States (the largest volume since November 2014). Colombia, which has been struggling with low crude prices since 2014, has also begun to increase exports in the recent higher-priced environment. Exports to the United States averaged 372,000 b/d in the first quarter 2018, compared with 273,000 b/d in first quarter 2017. The 2017 volume wasthe lowest export level to the United States since the general strike in January 2003.

China's crude imports also reflect the shift away from Venezuelan products. Venezuelan imports decreased by 10%, or 390,000 b/d, during first quarter 2018. China normally uses this sour crude for asphalt production. China has recently increased imports from medium, sour Kuwait Blend from Kuwait and medium, sweet Libra from Brazil (see Figure 2). In fact, Kuwait recently outranked Venezuela as the ninth-largest exporter to China. In the past five years, China's crude imports have been slightly lighter, as US unconventional production and Brazil's pre-salt production increased and as China has boosted imports of African light, sweet barrels. From now until 2040, Chinese and US imported crude are expected to contain more bottoms and higher sulfur content.

India's imports from Venezuela have slipped from third to fifth place since 2017. Estimated delivered imports for July are approximately 240,000 b/d, or almost 50% lower than August 2017. Iran will be another unstable source of heavy crude to India in the next few years. The country's refiners will have to rely on their largest heavy importer, Iraq. India has increased crude consumption of Middle Eastern sour crudes, which will continue to displace Latin sours over time.

The world's heavy sour crude production contains roughly 3 MMb/d of vacuum bottoms, most of which is consumed in the world's 7.8 MMb/d of coking capacity, about 75% of which is located in North America and Asia (see Figure 3). Vacuum bottoms from medium and light sour barrels fill the remaining capacity. Venezuelan production declines to zero in 2019 and thereafter, IHS Markit estimates that ~400,000 b/d of vacuum bottoms - equal to about 5% of global coking capacity - would be removed from the market. This would result in a significant shortfall of feedstock for coking operations and likely cause a notable reduction in light-heavy price differentials compared to the IHS base forecast. 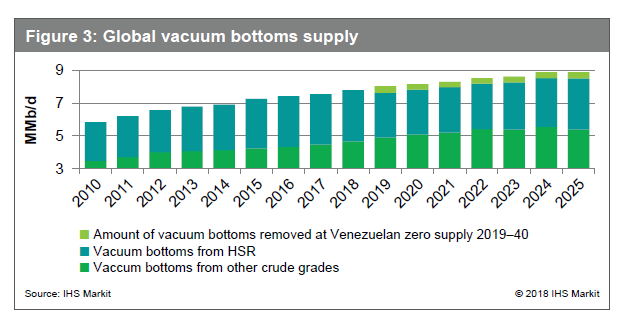 Western Canadian Select ([WCS], which includes crude streams with quality properties of 22.2°API and 3.95% sulfur, competes with other Latin heavy, sour crudes such as Mexican Maya (21.5° API, 3.40% sulfur), Venezuelan Merey (18.0° API, 2.30% sulfur), and Colombian Castilla (18.8° API, 2.00% sulfur). WCS-Latin HSR differentials narrowed from $30/bbl in 2012 to $9/bbl in 2017 due to recent pipeline expansions in the United States. As a result of regulatory delays, both the Kinder Morgan's Trans Mountain pipeline expansion and TransCanada's Keystone XL pipeline are now expected to start up in 2021.Considering these conditions, we expect marginal barrels of heavy supply to clear through the US Gulf Coast in 2021 and beyond. IHS Markit expects the WCS-Latin HSR differentials to narrow by approximately $6/bbl after both pipelines start up. WCS imports will continue to displace Latin HSR imports as more Latin HSR barrels shift to Asia.

#CCUS projects are moving away from #oilandgas, with most of the future #carbon capture projects planned for the po… https://t.co/9e7xOPqgan

What's the role of #carbon sequestration solutions to reach decarbonization targets in the next years? Our experts… https://t.co/aNkDCOBSMK

#Cleantech investments have been all the rage amid the #climate concerns and #energytransition strategies. But supp… https://t.co/NNNlK6Zg7B

When is #upstream E&P capex expected to recover to 2019 levels? #IHSMarkitEnergyStats https://t.co/omb5olaRj2