Venezuela exports near zero - how are refineries coping

Once among the top three crude oil-producing countries in the world, Venezuelan crude oil production has drastically plummeted. IHS Markit estimates show that oil production in July declined by 62% from a year ago to approximately 250,000 b/d - a far cry from its 2017 output of 2 MMb/d. As a founding member of the Organization of the Petroleum Exporting Countries (OPEC), Venezuelan output is a fraction of what it was in the past. Its demise has had little impact on overall global oil balance, owing to the ample production capacity around the world.

The main reason for the long-term decline in Venezuela production is epic mis-management and low levels of investment. The 2020 oil price collapse limited domestic oil storage, and US sanctions have exacerbated the decline of Venezuela's oil industry in the past 6 months. Loss of export markets has also been a key issue. On 12 March 2020, Venezuela's main trading partner, Rosneft, was sanctioned by the U.S. Department of Treasury. This was followed by a "food for crude" program with Libre Abordo, but it has also been sanctioned by the US. Additionally, on 22 April 2020, Chevron was given until 1 December to leave Venezuela, during which it cannot export crude from the country. Since 2017, export volumes to Venezuela's three key markets - mainland China, India, and United States - has declined approximately 1.5 MMb/d. Initially, heavy sour crude shortages impacted these markets, but complex refineries have since replaced Venezuelan crude with Middle Eastern (Iraqi Basrah Heavy), Canadian Western Canadian Select, and other Latin American crude (Mexican Maya and Colombian Castilla/Vasconia). A combination of heavy, sour crude supply tightness and the general drop in crude prices, the light-heavy price spread has narrowed with the Maya-LLS differential falling from $12/bbl in 2018 to $4/bbl in July. Venezuela's oil production is nearing a total collapse, but a long-term recovery is still possible for the country with the largest crude reserves on earth.

Download our infographic on the drastic decline in Venezuelan production between 2018-2020. 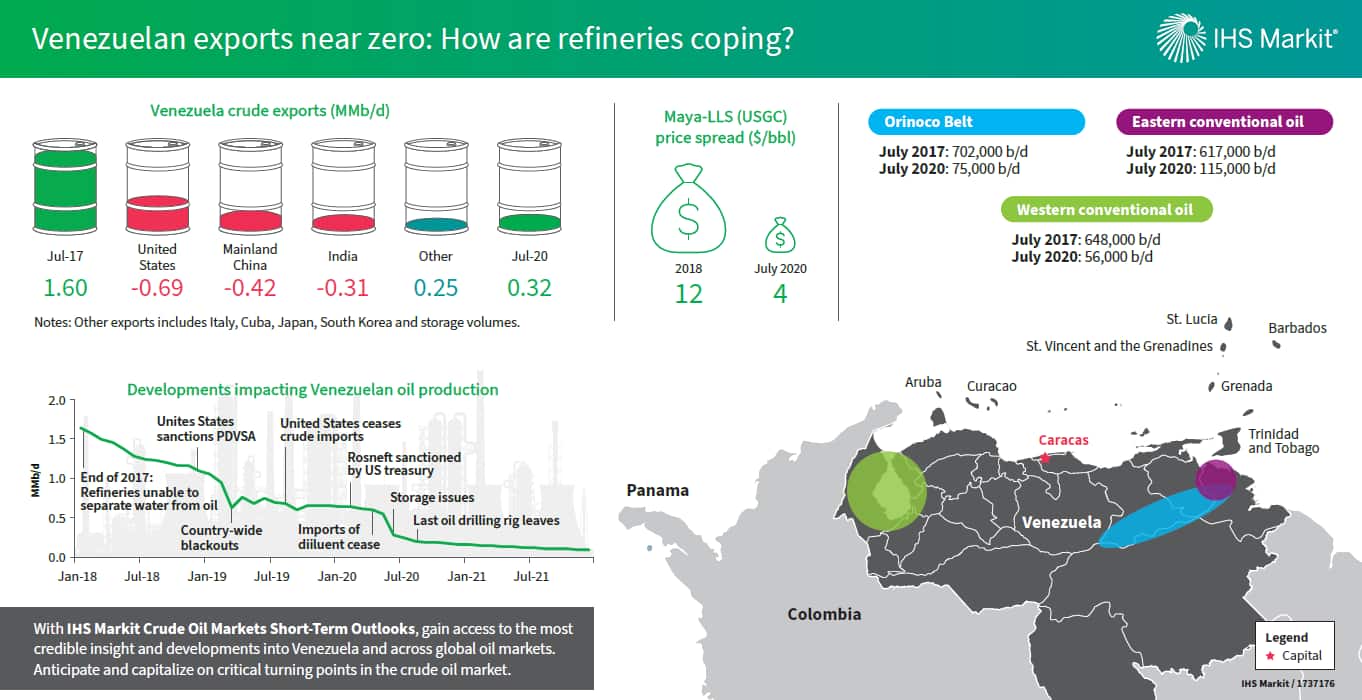