Palm Oil is the tightest since at least 201 Over the past 10 years, palm oil has increased its importance in global vegetable markets. In 2004/05 palm oil overtook soybean oil as the world's largest produced oil. Since then, palm oil has continued to grow, outperforming the growth of alternative oils, so much so that palm oil production is now larger than the combined production of all other oils excluding soybean oil.

Palm Oil is the tightest since at least 2011

Over the past 10 years, palm oil has increased its importance in global vegetable markets. In 2004/05 palm oil overtook soybean oil as the world's largest produced oil. Since then, palm oil has continued to grow, outperforming the growth of alternative oils, so much so that palm oil production is now larger than the combined production of all other oils excluding soybean oil.

This growth has seen soybean oil ceding leadership of global vegetable oil markets to Southeast Asia's palm oil. This has become especially important as palm oil is extremely tight right now. Focusing on Malaysia, as reliable data unbiased is absent from Indonesia, stocks are arguably the tightest since at least 2011/12.

This creates a bullish situation for palm oil and has pulled soybean oil with it. Ordinarily, in a tight situation like this the solution would be for palm oil prices to rally in an effort to shrink the discount to soybean oil, encouraging end users to switch to soy oil, which historically is the higher priced oil. This would encourage a greater crushing of soybeans to accommodate the increased demand for soy oil. However, the situation that exists in soybeans, the world's largest oilseed, makes this very difficult. Solving the tightness in vegetable oils due to tight palm oil would only make the soybean situation worse.

US Soybean Oil is pricing itself out of the world market. It is more valuable in US motor fuels than in vegetable oil world trade. This is also pulls Argentine Soybean Oil higher.

This is likely to keep palm exports stronger than normal as price sensitive buyers move to Palm instead of Soybean Oil. 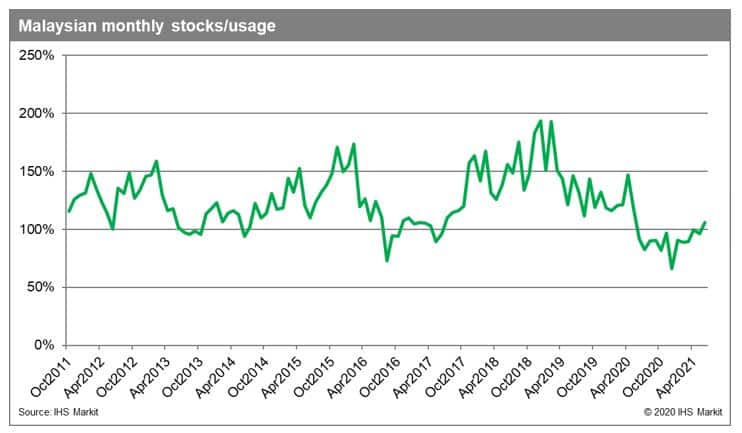 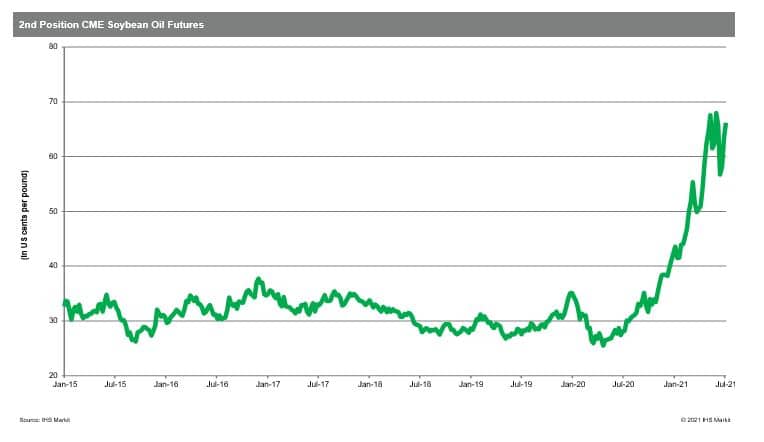 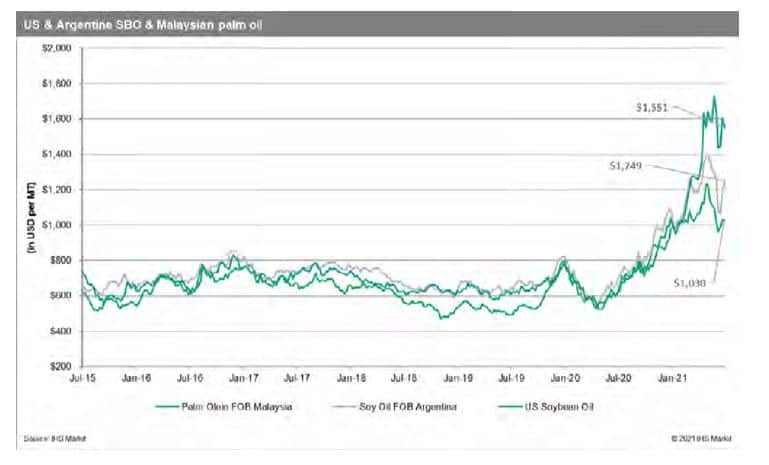 What about other oils?

There clearly is a role for other oils to fill in the void, but it is only marginal. When one combines the production of rapeseed/canola, sunflower, cottonseed, coconut, peanut, palm kernel and olive oil they do not add up to as much volume as palm oil alone. Additionally, the production of the second and third largest oilseeds, rapeseed/canola and sunflower, were challenged this year due to adverse growing conditions in the major producers of the EU and Ukraine.

How does this get resolved?

Higher prices and tighter calendar spreads are needed to reduce consumption and defer consumption to a future period. What price accomplishes the job is hard to know in such an unprecedented situation. Moreover, the difficulty comes in as vegetable oils are used in nearly all food preparation, making reductions in consumption very difficult. It is much easier when only one oil or oilseed is tight. All is needed is switching from on to another. However, in this situation one needs an overall slowdown in vegetable oil consumption. Moreover, biodiesel, the second largest use category, has become an integral part of the global motor fuels complex.

Making commitments to reduce carbon in California's motor fuels. Renewable diesel just becomes the most readily attractive way to met the carbon reduction goals. In this policy California is committing to reduce the carbon intensity of their fuels by 20% by 2030. With vegetable oils playing a large part in the compound to create renewable diesel it creates an increase in demand. With the whole of Canada set to implement its own Low Carbon Fuel Standard policy and states such as Illinois, Pennsylvania, New York and Massachusetts all having proposed measures, this is anticipated to add to further demand upon vegetable oils.

China is again becoming increasingly active in the world trade of feeds due largely to the recovery of their hog heard from African Swine Fever (ASF) that previously devastated their hog heard, reducing their numbers by 30% at its worst by most accounts. With China producing nearly 50% of the world's pork, ASF had reduced world pork production by 15%.

The recovery is well underway with 2021 Q1 data showing pork production was up 32% YoY. This has caused a surge of imports of feeds helping prices to rally. Given that soybeans are an integral component in any animal protein production whilst also being an important oilseed this rally within soybeans creates upward momentum in vegetable oils

Production of Malaysian Palm Oil continues to underperform. A resurgence of Covid-19 as Malaysia battles a third wave of infections has meant measures to migitage infections have ensured a labour shortage of approx 32,000 people. With the bulk of migrate workers coming from India, Bangladesh and Indonesia government travel restrictions have prevented an influx of labour. January-May production is 6% smaller YoY.

@pinaki_kkkm Can you please follow us so we can DM? Thank you!

@billskutch We're sorry to hear this. Could you kindly DM us so we can make sure you're connected with the right pe… https://t.co/JBXkQqoJQp

@eliz_beth Thanks for the great feedback!

RT @SPGlobal: June marks the start of Pride Month, where we commemorate and celebrate the LGBTQ+ community in countries across the globe. S…