This is a collaborative article written by Mónica Hoz de Vila and Siddhartha Sen.

Mexican President Enrique Peña Nieto led a press conference at the Miguel Hidalgo refinery on November 3, 2017, announcing PEMEX' successful efforts resulting in a historical gas discovery, the Ixachi 1. The last significant onshore gas discovery made by PEMEX was the Giraldas fields in 1977 in Tabasco, the largest oil producing state in Mexico. The Ixachi 1 asset is located within Block AE-0032 in the Veracruz Basin, among fields that contain declining to marginal conventional reserves. If successful, the Ixachi 1 discovery could potentially serve as a major gas supplier to Veracruz City located 72 kilometers away. Development of Ixachi 1 will be challenged by economics of gas imports. 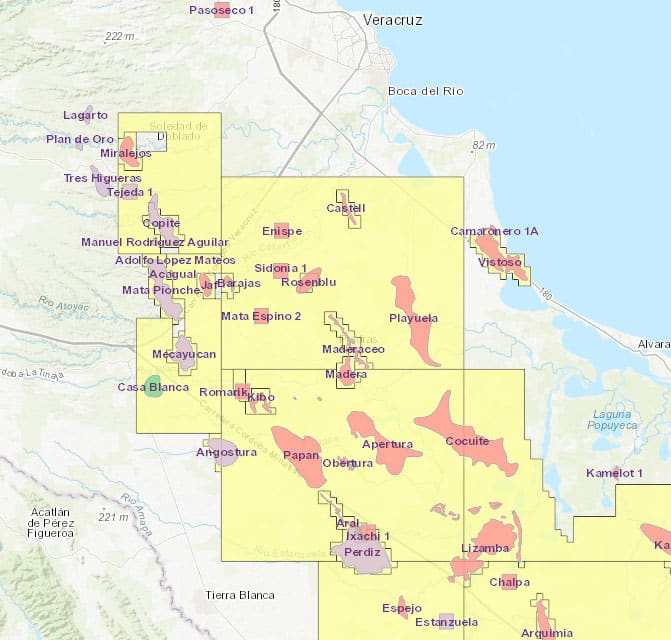 While PEMEX announced that it aims to develop Ixachi 1 on its own, with an estimated development CAPEX of US$280 million US dollars for the first 5 years of the project, there are valid reasons to assume that PEMEX may want to bring in a strategic partner. The Ixachi 1 holds an estimated reserve size of 75 MMbbl condensate and 750 Bcf of gas. It is a good farm-in prospect with PEMEX already holding infrastructure and know-how in place, yet needing to share the technical and economic risks from drilling in Ixachi's challenging high temperature and high pressure reservoir. PEMEX may also want to expedite Ixachi's development by late 2018 or early 2019, as next year's presidential elections present a real risk for the Mexican's E&P sector.

By using the IHS Markit Vantage asset valuation tool, we can edit base case assumptions and run sensitivities to create point forward looking scenarios while benchmark assets. As a base case scenario, we assume a start year of 2019 for Ixachi 1, with a nominal average price of US$50/bbl and US$3.46/mcf for 2017 and inflated 2% annually resulting in US$52/bbl and US$3.60/mcf in 2019. The table below showcases Ixachi 1 net present value and return on investment at different price scenarios. Overall, the economics are favorable for this asset in because it has enough condensate, yielding a rate of return on investment above 30% over time.

We can also contrast Ixachi 1 with relevant onshore gas fields in Mexico that have a breakeven (BE) below US$2/mcf and an asset NPV of over US$100 million. The circles are sized by total gas equivalent production (Bcfe). Ixachi 1 stands out among the assets, showcasing the significant possible addition to PEMEX' organic reserves. Burgos, one of the top producing gas projects in Mexico, has an NPV similar to that of Ixachi 1. The declining production of Burgos could be replaced by production from Ixachi 1 in the future. The assets in the graph were part of Bid Round 2.2, all taken by new key players in Mexico's E&P industry. 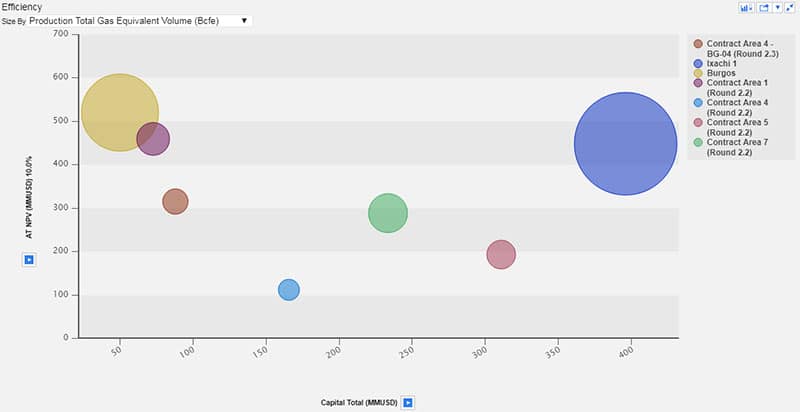 When evaluating PEMEX' ATCF over the coming years in the Vantage tool, we can identify that the company's ability to finance future developments, while paying out its increasing debt, will be very challenging. By screening the company's top assets in terms of NPV and IRR% post 2017, Ixachi 1 stands as an opportunity to generate extra liquidity for the company starting in 2020, with a return on its investment by 2024. Tlacolula, Ahuatepec, Cacahuatengo and Lakach are also a buffer for the company after 2020. Lakash and Ixachi are appraisal projects and require significant injection of development CAPEX, but the costs will be offset by their earnings upside. 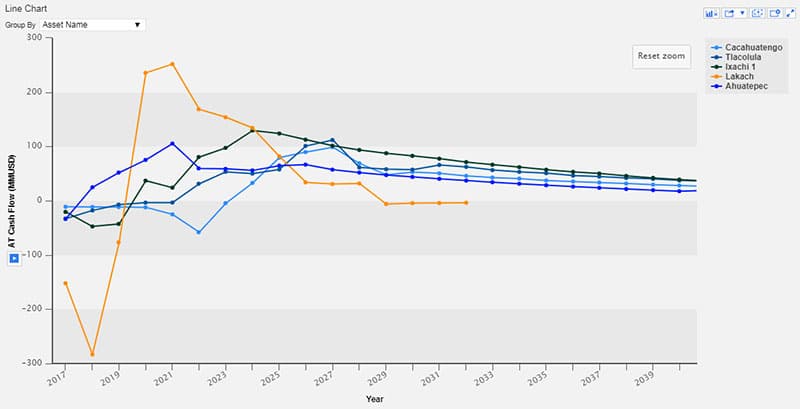 Ixachi 1 could be an important addition to the portfolio of PEMEX, a company trying to restructure its holdings, improve its financial outlook and position itself as a viable partner for international companies. As Mexico aims to increase its local gas production to satisfy the country's energy mix, we could expect continued efforts to discover new and challenging frontiers like Ixachi 1.

Learn more about our asset valuation tool, which was used in this analysis.

What are the key trends in the world that influence #technology programs in E&P firms? Oscar Abbink, director of re… https://t.co/Q6mVIZGvCy

Covid-19 is expected to have a limited impact on the global #upstream cost markets. We expect #China’s influence on… https://t.co/dJT89Ygx0w

IHS Markit’s Activity Tracker has the #rigcount increased by 7 from last week. Texas 5, 6, 9, 7B region had the gre… https://t.co/3lW4xqpReX

The #UnitedStates Global Photovoltaic Demand installations are expected to grow by how much in this year?… https://t.co/keIPhHfkI2