The highly transmissible COVID-19 Delta variant highlights the importance of vaccines to both health and economic recovery, with widespread vaccination remaining the most critical component in the fight against the disease. COVID-19 vaccines will continue to be a highly sought-after commodity throughout 2021 and into 2022 and we expect they will play a major role in trade and diplomacy. Over the long term, we expect some of the vaccine trade dynamics first realized during the pandemic to endure, with lasting global impacts even after the pandemic is contained.

According to an analysis of IHS Markit's statistical trade data, the trade value of global exports of human vaccines surged in Q1 2021 to USD13.2 billion, representing a 75.5% increase over Q1 2020. Countries that innovated across the COVID-19 vaccine space had impactful increases in their year-on-year trade levels. 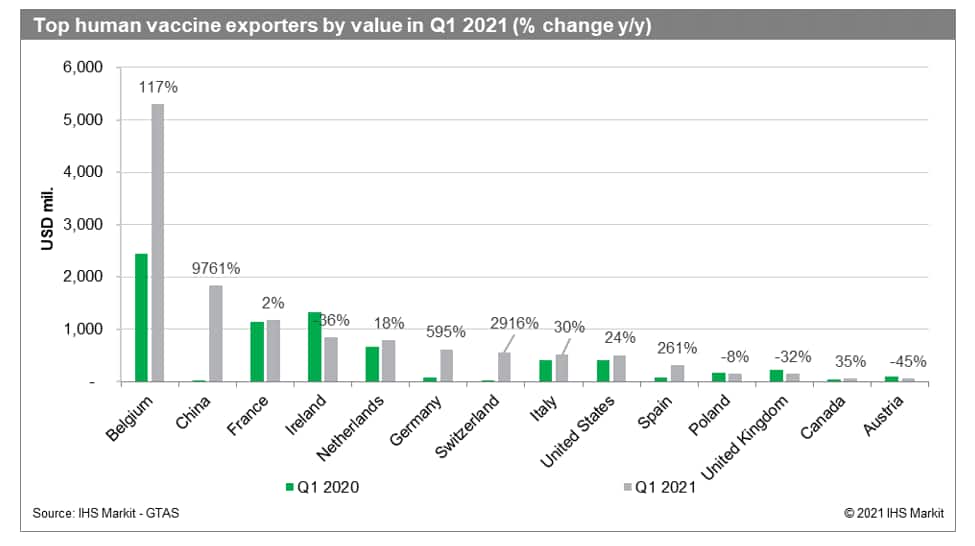 Specifically, China has emerged as a major exporter of human vaccines, becoming the second largest global exporter after Belgium in Q1 2021. In Q1 2020, China exported a mere USD18.6 million worth of vaccines, while in Q1 2021, this has surged to USD1.83 billion, representing a 9,760.8% increase. Additionally, the data suggests that China has expanded its trading remit across an emerging set of markets. Before Q1 2021, China had only exported to two countries on its list of top ten trade partners (Indonesia, and Hong Kong SAR). In Q1 2021, Indonesia remained a major export market followed closely by new partners Turkey, Brazil and the United Arab Emirates. All in all, China's export trade partners increased from 29 countries in Q1 2020 to 87 countries in Q1 2021.

Seeking to capitalize on its COVID-19 vaccine innovation, particularly across less developed markets, Russian human vaccine exports surged 1,392.6% y/y in Q1 2021 to USD 107.9 million, mainly driven by trade with new partners including Argentina, Hungary, Mexico, the United Arab Emirates and Serbia. India's human vaccine exports increased by 27.0% y/y in January 2021 to USD 103.5 million, particularly driven by exports to regional trading partners, in line with the government's "Vaccine Maitri" policy. Likely driven by the prioritization of its domestic vaccine campaign at the start of 2021, the United States realized a modest 24.3% y/y increase in vaccine exports in Q1 2021 to USD505 million.

The European Union realized a 48.6% y/y increase in exports in Q1 2021, to reach USD 9.98 billion. The majority of this growth was driven by internal EU trade (USD 4.01 billion; +46.1% y/y), reflecting both the robustness of the bloc's pre-pandemic internal trading market and the centralized vaccine strategy adopted during the pandemic. The EU adopted a centralized approach to vaccine procurement and regulation, outsourcing oversight to the European Commission. Vaccines were to be allocated on a per-capita basis and distributed domestically by member states. This strategy was intended to encourage internal cohesion within the bloc but inadvertently contributed to an initially slower vaccine rollout compared to the US and UK, further exacerbated by production constraints. Domestic vaccine shortages, in turn, drove the introduction of "vaccine protectionist" measures directed towards non-EU countries, including export controls on COVID-19 vaccines. In practice, the mechanism has only been used once in March 2021 when Italy blocked a shipment of AstraZeneca COVID-19 vaccine doses bound for Australia.

Looking ahead, calls for greater global equity and fairer COVID-19 vaccine distribution are likely to drive countries with vaccine innovation and production capabilities further outwards towards greater participation in the global campaign to contain the pandemic and push forward recoveries via sharing vaccines or making direct donations to specific allies.