The global economy expanded at a solid rate again in June, according to the JPMorgan Global PMI™ (compiled by IHS Markit). Although the rate of expansion slowed slightly, the June gain rounded off the strongest calendar quarter for 15 years and took the recent run of growth into its twelfth consecutive month. 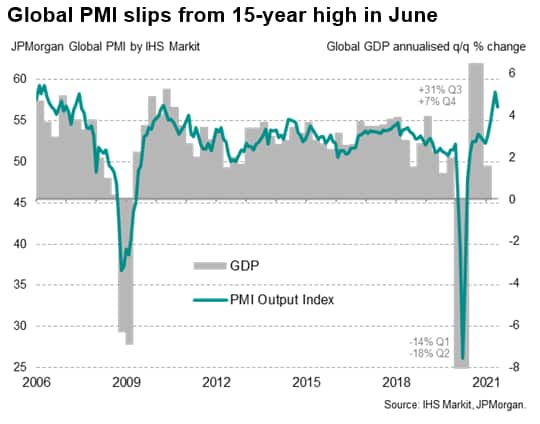 The latest global expansion was again led by the service sector, which outperformed manufacturing for a third successive month despite the rate of increase easing compared to May's 15-year peak. Manufacturing also continued to expand at a strong rate (enjoying one of the best performances for over a decade), though likewise cooling modestly in the rate of expansion.

The outperformance of the service sector throughout the second quarter has coincided with COVID-related restrictions easing globally on average to the lowest since the pandemic began, albeit with marked variations by region. 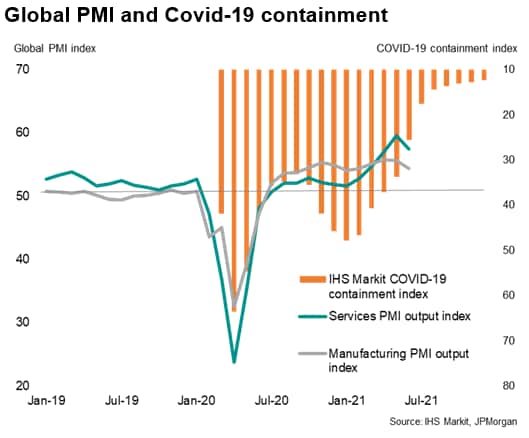 The June surveys showed a widening divergence of economic growth, due principally to the ongoing impact of COVID-19 and the extent to which vaccination programmes have allowed countries to open up their economies.

Output in the developed world grew at the second-fastest rate for 15 years. The rate of expansion eased from May's 17½ year peak, but remained impressively robust across both manufacturing and services. Services, in particular, have benefitted from the further opening up of economies in the US and Europe as high vaccination rates have allowed the removal of many restrictions.

In contrast, the emerging markets as a whole saw growth slow close to stagnation in June, registering the weakest expansion since July of last year. Growth slowed in both emerging market manufacturing and services, commonly blamed on the impact of renewed COVID-19 restrictions and lockdowns to fight new waves of the virus. 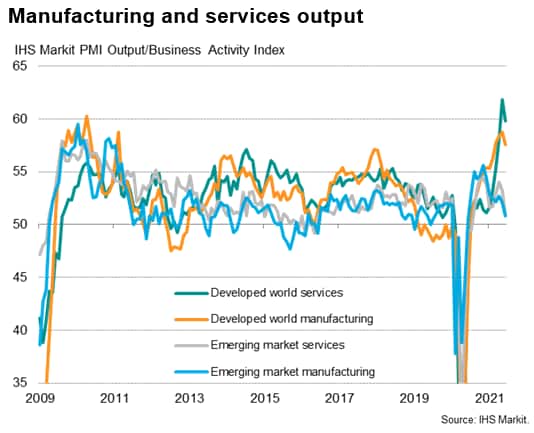 Barring the shutdowns in mainland China in February 2020, the resulting underperformance of the emerging markets relative to the developed world was the widest in the 23-year history of the global PMI surveys. Looking at the average performance across the second quarter as a whole, the divergence is the widest on record. 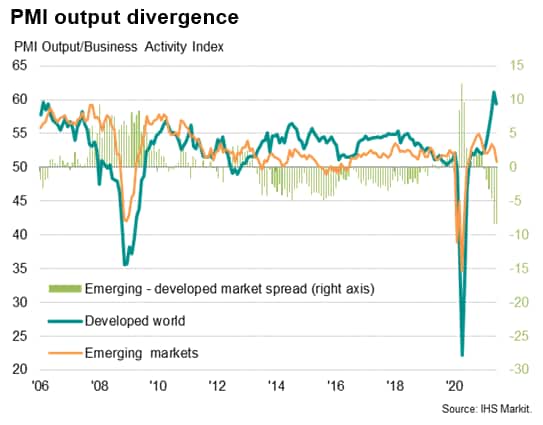 Of the major developed markets, the US reported the strongest overall expansion of the ninth successive month, led by especially rapid growth of service sector activity, followed by the UK. While both the US and UK witnessed a cooling in rates of expansions within both manufacturing and services, both economies saw PMI survey record expansions in the second quarter as a whole. Both countries also had many COVID-19 restrictions lifted with impressive vaccination progress.

Slower US and UK growth could be as much attributed to capacity constraints - and notably shortages of raw materials and labour - than any underlying weakening of demand.

The eurozone meanwhile saw growth continue to accelerate in June, climbing to a 15-year high as the region continued to catch-up with the earlier economic recoveries seen in the US and UK. Sustained near-record manufacturing growth was accompanied by the sharpest rise in service sector activity for 15 years, reflecting the easing of pandemic restrictions and encouraging vaccination progress in recent weeks.

The strong developed world expansion is even more impressive when one considers that Japan saw business activity fall for a second month running in June. A rising wave of infections led to a further contraction of service sector output and a near-stalling of factory output growth. More encouragingly, future optimism in Japan jumped to an eight-year high, suggesting that growth will soon pick up as Japan's vaccine progress gathers greater coverage. Of the major economies, India meanwhile experienced the steepest downturn. Fighting a renewed virus wave, India saw business activity slump at a rate not witnessed since July of last year. Service sector output fell especially sharply, down for a second month in a row, though manufacturing output also moved back into contraction for the first time in 11 months. Future optimism also fell further in India as companies continued to worry about the ongoing impact of the pandemic.

Growth in mainland China also slowed sharply to the weakest since April of last year amid renewed efforts to control the spread of the virus. Service sector growth more or less stalled, and factory output rose at the slowest rate for 15 months.

Growth also slowed in Russia as COVID-19 restrictions continued to hamper the recovery, albeit with growth remaining among the highest seen since the pandemic struck.

Output in Brazil meanwhile returned to growth for the first time since December, linked to looser restrictions, though rising political tensions are likely to stymie future growth. 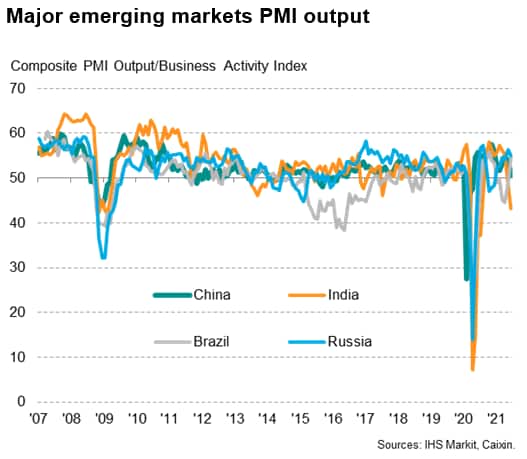 The link between vaccination progress and the PMI score of economic growth (measured across both manufacturing and services) is illustrated in the following graphic. The UK, for example, with 67% of people vaccinated with at least one shot of vaccine is enjoying one of the fastest economic expansions. India, suffering the lowest vaccination rate, is seeing the steepest downturn. 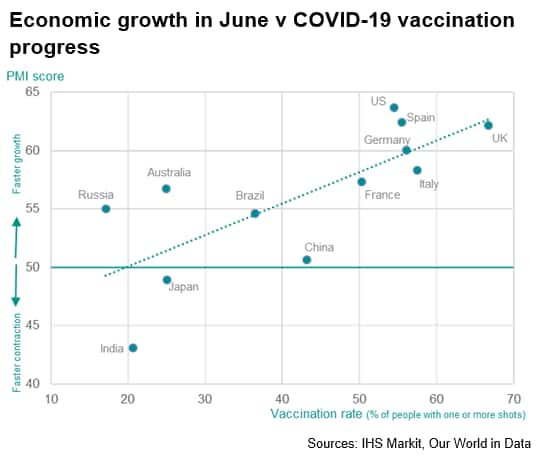 However, vaccinations are clearly not the only factor governing growth rates. While the UK has the highest vaccination rate, it is the US which is enjoying the fastest economic expansion. Hence the degree to which COVID-19 restrictions have been eased and other factors, such as the amount of policy stimulus, are important. But the chart clearly demonstrates the 'vaccine growth dividend' that certain countries are currently benefitting from.