The use of airstrikes by Syrian and Russian forces in the ongoing conflict in Syria has increased 149.8 percent since Russia's intervention in September 2015, helping the Syrian government to triple the territories under its control, according to a new report from Jane's Terrorism and Insurgency Centre (JTIC).

"The changing landscape of the conflict in Syria as a consequence of the Russian intervention has provided the Syrian government with the space and time to concentrate forces at key strategic areas and use overwhelming force to recapture opposition-held territory," said Matthew Henman, head of JTIC at IHS Markit. "JTIC's recorded data underlines the key role airstrikes have played in this strategy, with opposition forces largely unable to defend against, let alone replicate, the threat posed by airpower."

Key findings in the report:

"From early 2013 onwards, a major component of state counter-terrorism efforts was the use of airstrikes, which were used against opposition militant targets and in an indiscriminate manner against opposition-controlled territory," Henman said. "Both tactics frequently resulted in civilian casualties: likely a deliberate, punitive way of punishing civilians deemed supportive of the opposition."

Russia has claimed that its intervention was launched to target the Islamic State and other hardline militant Islamist groups.

The vast majority of Syrian/Russian airstrikes in the post-intervention period have targeted opposition groups other than the Islamic State - further underlined when examining the geographical breakdown of airstrikes in this period.

Almost two-thirds (66.2 percent) of all airstrikes in the post-intervention period were conducted in the governorates of Aleppo, Idlib and Damascus and Rif Dimashq, and particularly concentrated in areas where the Islamic State has little to no operational presence. There is a substantial degree of continuity from the pre-intervention period, where those three governorates were again the location of the most airstrikes and collectively accounted for 64.1 percent of all strikes in that timeframe.

Tactical airstrikes have facilitated recovery of territories by Syrian state

Russian intervention has been instrumental in not only ensuring the continued survival of the Assad government but also reversing the momentum of the conflict decisively in favour of government forces against a broad range of opposition forces in the country.

According to Conflict Monitor by IHS Markit, the state controlled just 15.9 percent (29,450 square kilometres) of territory in Syria in mid-September 2015. By contrast, at the end of March 2018, this had almost tripled to 47.4 percent (87,995 sq km) of the country. In addition to capturing large swathes of central Syria, this major territorial gain included the securing of vital urban centres and key strategic locations.

In particular, the state has re-established full control over the city of Aleppo, removed the Islamic State threat to Hama and Homs, re-established full control over Deir al-Zour city, secured the border with Lebanon, significantly reduced the threat to the capital Damascus, and effectively contained a significant proportion of the militant Islamist opposition in Idlib governorate. 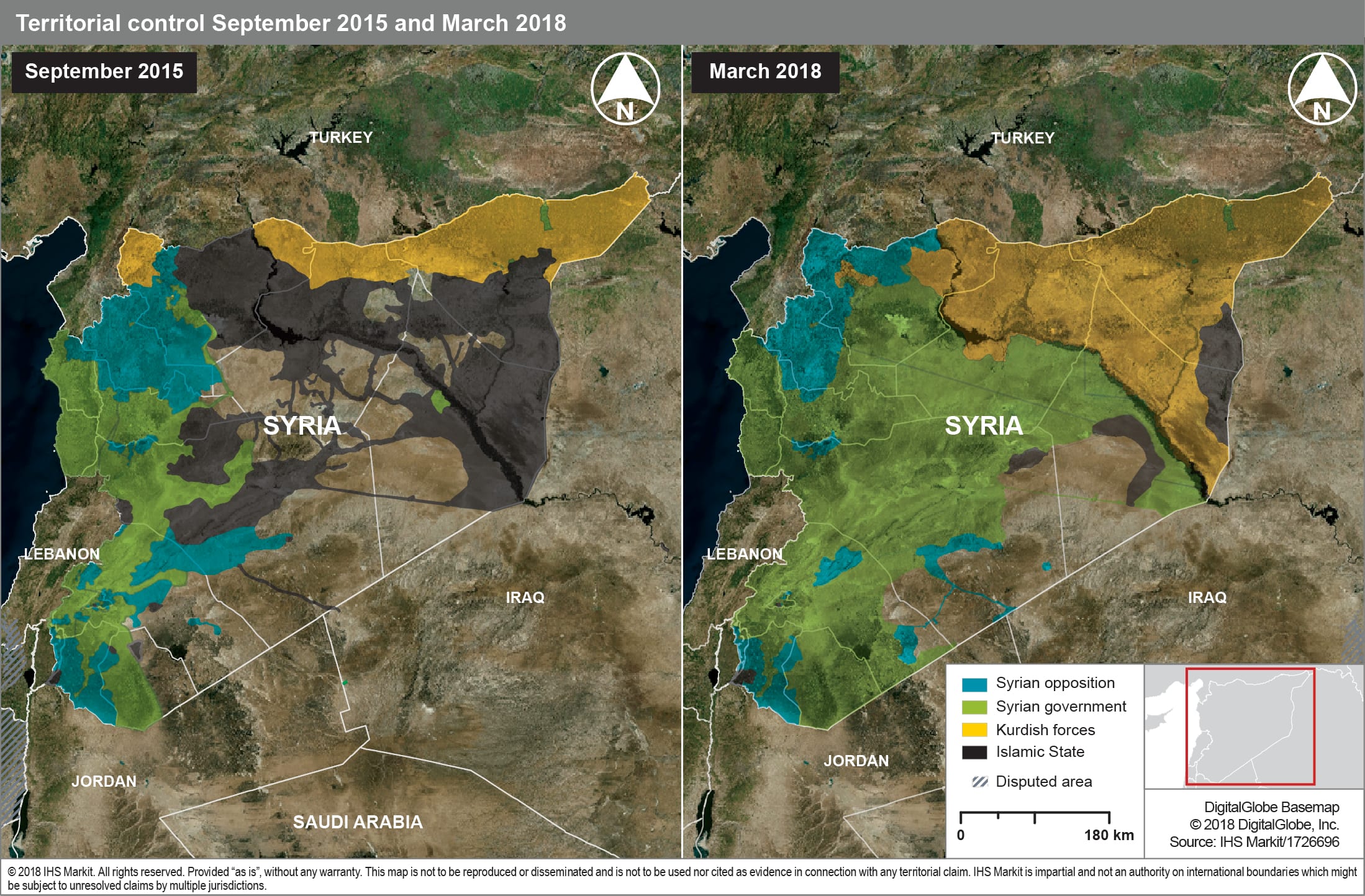 Get in touch here to learn more about JTIC and other solutions from Jane's.