The trend toward safety is likely to continue, as major announcements in 2020 from Avangrid (PNM Resources acquisition), DTE Energy (plans to spin-off midstream natural gas business) and PSEG (plans to divest nonnuclear competitive generation) all reflect an increase in strategic emphasis on regulated electric and gas utility operations. 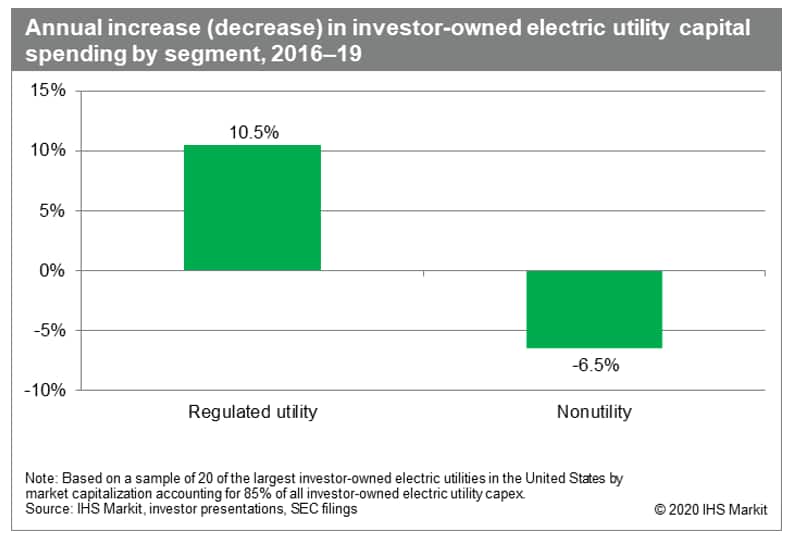 Driving the shift to safety

A key factor driving the shift to safety is the rising risks and weakness associated with competitive, nonutility investments. In recent years, utilities that have followed a shift to safety had the lowest overall shareholder returns, indicating that underperformance, in many cases driven by nonutility projects, forced a change in strategic focus.

Outlook for the shift to safety

Utilities that follow the shift to safety strategy will likely enhance the stability and predictability of capital spending and the associated returns. Analyses from IHS Markit suggest that a successful transition to a largely regulated utility will boost shareholder returns, at least in the near-term.

The shift to safety strategy reveals a bet that existing utility franchises can sustain earnings growth for many years. Organic growth has been robust in recent years and utilities anticipate spending more on their existing utility franchises over the next several years, driven by upgrades of aging assets, system hardening, transitioning power generation fleets to cleaner energy resources and demand growth (in certain regions).

For now, the shift to safety looks to be a good bet for most utilities. But there is a potential for a new set of risk factors, like customer affordability or state regulatory changes, to disrupt the cover of safety provided by a fully regulated strategy.

Learn more about our global power and renewable services.

Ben Levitt is Associate Director of Research and Analysis on the global power and renewable team.