US upstream under scrutiny: Regulatory burden, restrictions set to increase under the Biden administration

The US administration of President Joe Biden is conducting an overhaul of hydrocarbon policies and regulations, which is likely to result in more stringent environmental oversight and the removal of certain areas from future leasing programmes.

Within his first few days in office, US President Joe Biden signed a series of executive orders that initiated a review of oil and gas policy and regulations with the aim of bringing them in line with the goals of the Paris Climate Agreement. The measures also include re-imposition of restrictions on E&P activity in environmentally sensitive areas and the repeal of deregulation initiatives in the hydrocarbon sector implemented by the previous Trump administration.

Previous administration's regulations will be scrutinised
Federal agencies are reviewing relevant agency actions taken between 20 January 2017 and 20 January 2021 under former president Donald Trump. The objective of the review is to assess the consistency of the federal regulations established by the previous administration with the new policy goals and suspend, revise or rescind them in case of any conflicts. Since most of the energy-related executive actions of the Trump administration were focused on loosening regulation of the oil and gas sector and promoting hydrocarbon development, the review will likely result in the enactment of new rules and/or reinstatement of regulations previously imposed by the Obama administration. Indeed, President Biden has already revoked multiple executive orders that had expedited environmental reviews and approvals for major infrastructure projects and facilitated the expansion of exploration and production (E&P) activity in the Outer Continental Shelf (OCS).

Federal agencies will target emissions from upstream operations
The Biden administration is also drafting new regulations to establish comprehensive standards of performance and emission guidelines for methane and volatile organic compound (VOC) emissions from upstream and midstream operations. Federal agencies will seek to compel the oil and gas industry to cut methane and VOC emissions from their projects by tightening the current requirements and standards. The approach could bolster the social licence of companies to operate, but potentially higher compliance costs may challenge smaller producers.

Moreover, federal agencies are also likely to increase scrutiny of potential greenhouse gas (GHG) emissions from proposed hydrocarbon projects as part of environmental reviews, which could complicate the approval of new developments. The Trump administration sought to exclude upstream and downstream GHG emissions of oil and gas projects from environmental analysis by federal agencies by amending the guidance to the National Environmental Policy Act (NEPA). President Biden has recently reversed the draft guidance and re-instated the 2016 rules, which will be updated by the White House's Council on Environmental Quality (CEQ) to align with the current administration's climate policy goals.

Mounting restrictions on E&P activity
There are currently six federal-level restrictions on upstream activity, primarily covering the Eastern Gulf of Mexico (established in 2006 and extended by former president Trump in 2020 through 2032) and offshore Arctic areas in Alaska. On his first day in office, President Biden reinstated a December 2016 executive memorandum that indefinitely banned lease sales in the entire Chukchi Sea planning area and a major part of the Beaufort Sea planning area, as well as a December 2016 executive order establishing the Northern Bering Sea Climate Resilience Area. Moreover, the Biden administration imposed a temporary moratorium on the implementation of the Coastal Plain (Area 1002) Oil and Gas Leasing Programme in the Arctic National Wildlife Refuge (ANWR). The Bureau of Land Management (BLM) is set to review the leasing programme and will likely recommend banning E&P activity in ANWR, given the Biden administration's opposition to upstream projects in the Arctic. 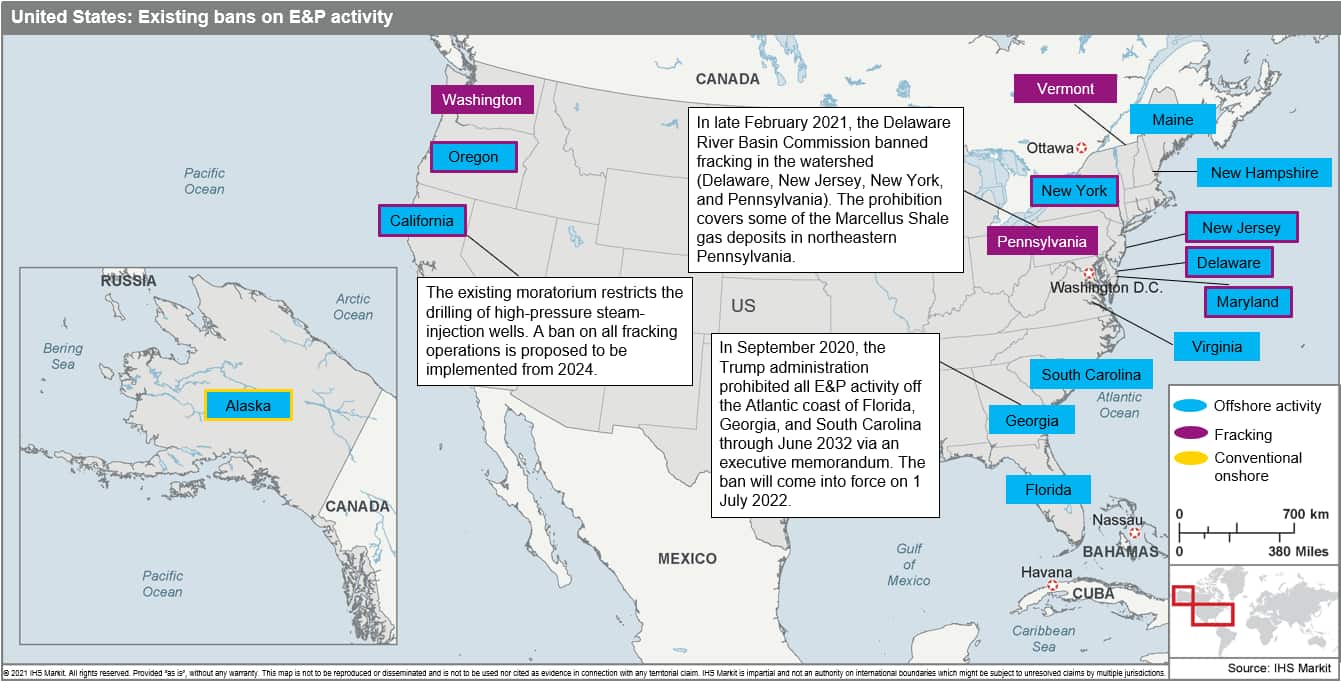 Figure 1: Federal and state-level E&P restrictions in the US as of March 2021 (permitting and leasing moratoria not included).

In addition, there are currently 17 state-level restrictions on E&P operations, most of which were imposed in 2017-20 in response to the Trump's administration expansion of federal leasing programme in the OCS regions. Multiple bills to ban offshore drilling at the federal level were introduced by the Democratic Party in the 116th Congress (2019-20), but they stalled in the Senate, then controlled by the Republican Party. Now, the Democratic Party will likely seek to leverage its continued (though narrower) majority in the House of Representatives and a 50/50 split in the Senate to advance legislative bans on E&P activity. In late January, Congressman Jared Huffman (D) reintroduced the West Coast Protection Act to ban future offshore leasing in California, Oregon, and Washington as well as the Stop Arctic Ocean Drilling Act.

The ongoing federal policy and regulatory reviews will likely drive volatility in the US hydrocarbon sector over the near-to-medium term. Environmentally sensitive areas are likely to be excluded from future leasing programmes, while Congressional Democrats will attempt to impose more durable restrictions through legislative action.

Learn more about our petroleum sector risk solutions at www.ihsmarkit.com/PEPS