Fueled by a dozen new plants and more capacity on the way, United States resin exports jumped 35 percent in the first half of the year as growing shipments to Europe, Southeast Asia, and South America offset a six percent drop to China amid the year-long trade war.

US resin exports in January-June increased in 19 of the top 20 markets, mostly by double digits, with China the only destination to experience a decline. The six percent decrease followed a 12.2 percent drop in resin exports to China in January-June 2018 compared with the first half of 2017, according to PIERS, a JOC sister company within IHS Markit.

This diversity is significant for container lines, which have multiple weekly services connecting North America with the world. Diversification of export destinations is also a plus for US ports that continue to rely on China as the main destination for most of their containerized exports, such as agricultural products and recyclables. Reductions in shipments to China have dragged exports into negative territory in a number of commodity areas, but ports such as Houston that are well-positioned for resin exports continue to do well.

While exports of most categories of resins to China have declined, US producers have continued to ship low-density polyethylene there because that product has been exempted so far from tariffs, Nick Vafiadis, vice president of plastics at IHS Markit, told JOC. However, that could change if US tariffs on imports from China take effect on 15th December and China retaliates further against US exports, he said. 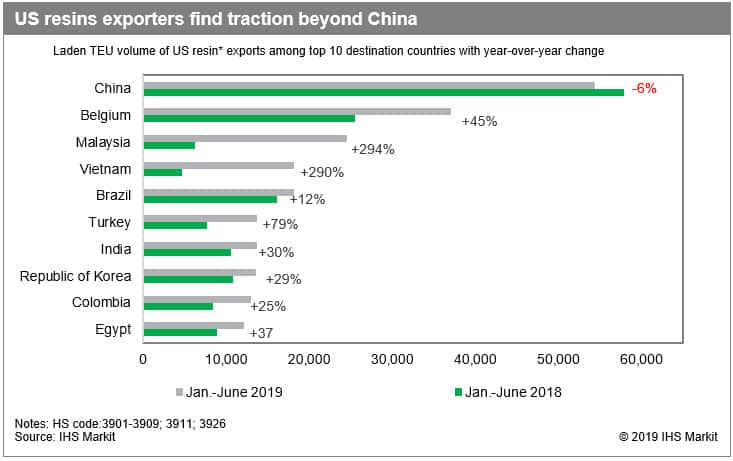 Overall, though, losses in the Chinese market are taking a toll on global supply and demand because "vast amounts of new production capacity previously anticipated to target the China market have come on line," Vafiadis said. He projected an annual global supply/demand imbalance of 8.4 million metric tons in the period 2020-22.

US resins plants are located mostly along the Gulf Coast, fueled by access to low-cost shale gas produced in the region. Gulf Coast producers compete in global markets with plants throughout North America and Mexico. Since shale gas production began to ramp up in 2016, a dozen plants have opened in the US, Mexico, and Canada, according to Joel Morales, senior director of polyolefins for North America at IHS Markit. Another 16 plants are scheduled or likely to come online between this year's third quarter and 2024, resulting in a total increased capacity from North America of 3.5 million metric tons, he said.

Houston, which dominates US resin exports, is the primary example of a port that is capitalizing on its ocean services to Asia, Europe, and Latin America, as resin exporters diversify their markets. Resin exports through Houston in the first half of 2019 increased 56.8 percent, according to PIERS. Houston's market share of total resin exports increased to 48 percent from 41 percent during the same period last year. Most of the other top US gateways, while experiencing increased resin exports, edged lower in market share. The other US ports each had market shares of 11 percent or less.

Ports in the southeastern US will grow their resin exports as new packaging plants come on-line this year and next year in Savannah and Charleston. Savannah is projected to double its resin exports with Plastic Express investing $172 million in two plants in Georgia. Two years ago, A&R Logistics began operations at Savannah's Ocean Terminal. Frontier Logistics in June broke ground on a $35.5 million packaging plant near the Port of Charleston. The 550,000 square-foot facility is served by the short line Palmetto Railways, which interlines with both the Norfolk Southern and CSX railroads.

Given the rapid growth in resin production along the Gulf Coast, exporters look to rail services to the southeast and Southern California to handle any overflow the Port of Houston may not be able to accommodate.

Despite two consecutive years of declining exports, China remains the leading destination for US resins, with a 12.8 percent market share. Belgium is next at 8.5 percent, while Malaysia is the third-largest destination with a market share of 5.6 percent in the first six months of 2019, according to PIERS. 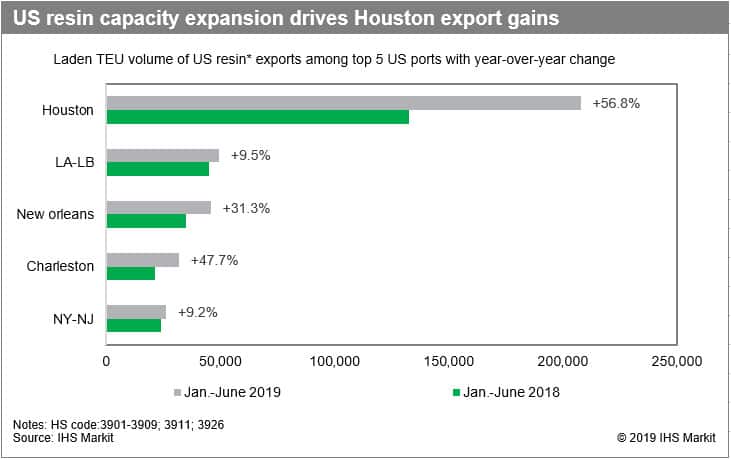 The diversification of export markets is also positive for resin producers throughout North America because up to 40 percent of production from plants in the US and Canada are sold in export markets, Morales said.

Except for the decline to China, resin exports to the remaining top destinations increased by double- to triple-digits in January-June 2019 versus the same months last year. The top 10 destinations for resin exports were quite diversified, with China, Belgium, Malaysia, Vietnam, Brazil, Turkey, India, South Korea, Colombia, and Egypt rounding out the top 10.

Continued rapid growth in resin exports could present equipment challenges for shippers, especially at inland locations such as Memphis and Chicago. That has been the story this year for some commodity shippers such as waste paper exporters. Nick Halper, director of export at the Paper Tigers, told JOC.com that scrap paper exporters have experienced some issues securing empty containers for their product due to the drop in imports. Also, chassis shortages and dislocations have surfaced this past year at inland locations, requiring repositioning of empty containers and chassis, at a cost.

Supply chain woes are far from over, @DanielYergin and @PeterTirschwell write in this @washingtonpost Op-Ed, topics… https://t.co/vgAUaHo9YM

Chinese shipbuilders picked up the lion's share of #shipbuilding contracts during the third quarter of 2021 with so… https://t.co/EsWcZDDckE