US Regional economic predictions for 2020

US state economies are entering 2020 with solid fundamentals. Labor markets continue to grow, unemployment is low, and consumers are spending. The risk of recession in 2020 is relatively low, with our baseline forecast calling for another year of solid, if unspectacular, growth for the United States.

Per usual, growth prospects will vary widely across the nation. We take a look at the seven most important trends that support our growth forecast.

The prolonged economic expansion pushed 19 states, including California and Florida, to record low unemployment rates over the course of 2019. As the expansion continues this year, unemployment rates will drop even lower, as slowing population growth further tightens an already taut labor market. The 10 states are: Alaska, California, Georgia, Idaho, Maine, New York, Oregon, Pennsylvania, Texas, and Washington. Eclipsing record low unemployment is nothing new for these states, as all 10 are set to surpass lows set recently in 2018 or 2019. While low unemployment is generally considered a positive, rates persisting at historically low levels can also act as a constraint on employment growth. It's challenging for employers, for example, to find and recruit qualified potential workers when faced with a shrinking pool of available labor. Indeed, eight of the ten states projected to reach record low unemployment in 2020 will also experience a deceleration in employment growth more pronounced than the US economy overall, as firms looking to expand payrolls in these states are met with an increasingly tight labor market.

2. Ten states will record population declines, as international migration remains weak. Out of the fastest growing 15 states, 6 will be in the South and 7 in the West.

International migration levels have been on a steady slide since they last peaked in 2016, setting a low for the decade in 2019. The current administration's policy towards immigration has played a role, as has the general cooling of the US economy. This slide has been especially impactful among the slower growing states and has pushed more into negative territory in recent years. In 2020, 10 states will experience population declines: West Virginia, New York, Illinois, Alaska, Louisiana, Connecticut, Hawaii, Mississippi, New Jersey, and Pennsylvania

The top-15 states expected to have population growth in 2020 will be led by Idaho, Nevada, Arizona, Utah, and Texas. Most of these states are growing thanks to large amounts of in-migration—both domestic and international. Arizona, Idaho, Nevada, and Utah feature relatively low costs of living and are attracting residents from nearby California, which had the highest net out-migration of any state in 2019. 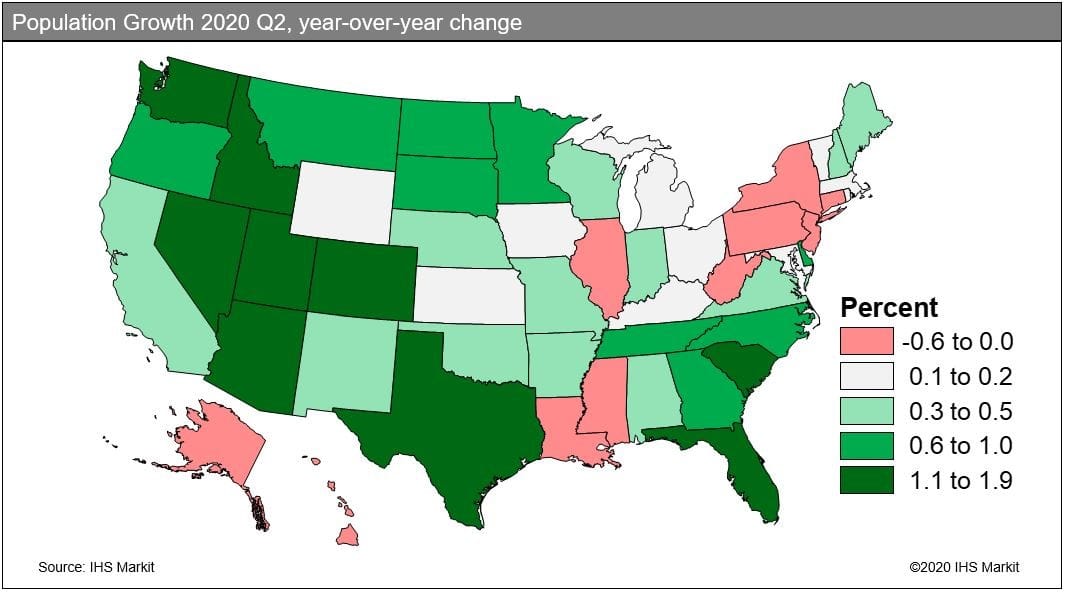 3. The Mountain, West South Central, and South Atlantic regions will all grow above the national average in key economic measures.

The Mountain, West South Central, and South Atlantic will outpace the nation in year-over-year growth in employment, real personal income, and real gross state product by the fourth quarter of 2020. These regions feature strong population growth, along with favorable demographic patterns and migration trends—all factors highly conducive to above-average economic growth. Over the next year, we anticipate the high employment gains of states like Arizona, Idaho, Nevada, and Utah to persist, in part because population and employment growth feed each other in a virtuous cycle of supply and demand. The Sunbelt states of the South Atlantic and West South Central will continue to see fast-urbanizing metro areas with robust payroll expansions over the next year, furthering growth in real personal income and real gross state product. Texas is the economic powerhouse of the West South Central and will be the primary driver of the region's success this year.

4.Manufacturing payrolls will decline, with the East North Central region seeing the most job losses.

Manufacturing payrolls will decrease over the course of 2020 after an impressive run-up in the wake of the Great Recession. States in the East North Central region, including Indiana, Michigan, and Ohio, will lose the most jobs, due to their outsized payrolls in sectors experiencing the largest declines. Indeed, the East North Central region will see a loss of almost 55,000 manufacturing jobs (down 1.9%) in 2020. Production of automobiles is slowing because of a gradual decline in car buying, with demand for smaller cars especially weak. In the meantime, orders for semi-trucks have seen a steep drop after very strong sales in 2017 and 2018. This has decreased demand for manufactured inputs such as steel, which is also facing lower demand from the energy sector due to a decrease in upstream and midstream activity.

The South Atlantic region, which has gained manufacturing market share from the Midwest over the years thanks to lower costs of doing business, will nonetheless experience job losses of its own on the order of over 33,000 jobs (down 1.7%) in 2020. No region will be spared manufacturing sector declines this year, but losses in the Mountain region will be muted thanks to its heavy investment in the manufacturing of high-tech products such as computer equipment and medical devices.

5.Seventeen states will exceed the US GDP trend growth.

Based on estimates about sustainable growth in the labor force and in productivity this coming year, we assess that trend (or potential) growth in the US economy will be around 2.0% in 2020. This year, we expect that 17 states will exceed that 2.0% US trend rate. All the states we expect to beat the national trend will be in the South and West, with Idaho, Washington, Utah, South Carolina, and Arizona ranking as the top-five, fastest-growing states. The strong positive population and employment gains in these regions, as well as an emphasis on service sector rather than manufacturing employment, will propel these states to the front of the pack. The list also includes California, Texas, and Florida; as the respective first-, second-, and fourth-largest US state economies, these states alone will account for a third of the total US GDP growth in 2020. 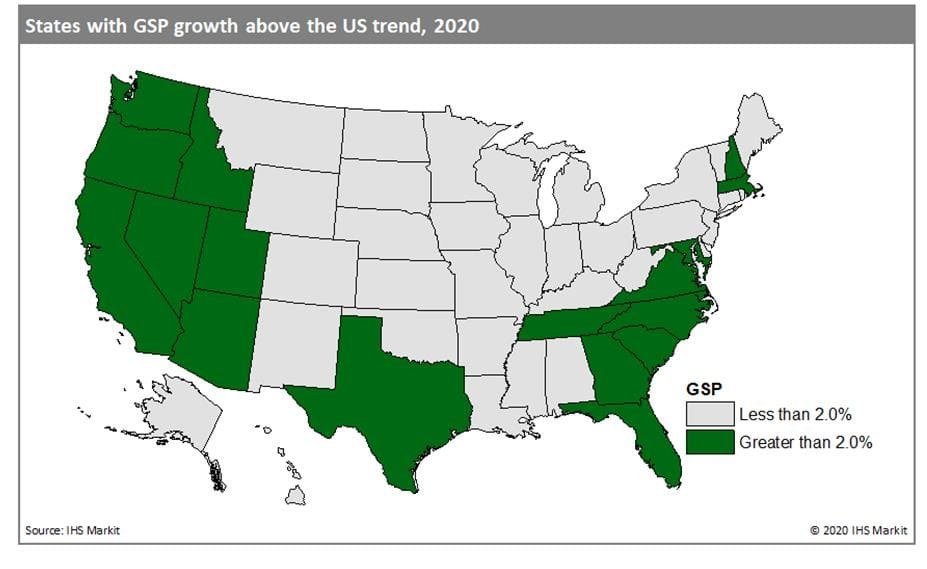 6. Economic growth related to mining will wane in the top oil-producing states.

The 2020 outlook for mining-heavy states is more precarious compared to recent years. US oil production growth is still on the rise, but the pace has been slowing. Rig counts trended lower over 2019, Brent prices are well off their mid-2018 highs, and investment dollars are not flooding into the shale industry at the same voracious rate they once did. IHS Markit expects the average prices of Dated Brent to trend lower in 2020 to an average in the high-$50s/barrel, which will be yet another headwind for the mining sector.

The impact of the slowdown on state economies will vary, with Texas best suited to weather a decline given its large and diversified economy, and the fact that its home to the Permian, the hottest US oil play. All oil-rich states will perform better than they did following the late-2014 oil price correction, given that this is more of a slow burn than a crash. However, these states will not be able to rely on the oil industry in 2020 for the robust growth it has provided over the previous few years and will see broader economic growth decelerate to some degree as a result.

7. US housing starts will recede from their recent peak.

Housing starts ended 2019 on a strong note, but activity will ease over the course of 2020. There are a few notable headwinds, including labor shortages in the construction industry, higher building costs, shortages of developable lots, and slowing population growth. Furthermore, starts have already come up substantially from the depths of their 2010 lows, with activity starting to ease in recent years as levels catch up with demand. Home inventories remain tight in major markets, which will keep starts activity resilient, but nonetheless there will be a slight pullback as we move through this year.

Regionally, the South will account for a little more than half of all housing starts in 2020, with the West chipping in another 25%. These regions have been seeing the largest gains in household formation and are where builders are concentrating their efforts. Starts will gradually ease or remain flat across all four Census regions by the end of this year.