The US economic recovery shifted up a gear in May, with the PMI covering the combined output of the manufacturing and service sectors surging past all prior peaks by an impressive margin. The strong correlation between the PMI and GDP means the economy looks set to enjoy impressive - potentially double-digit - growth in the second quarter.

Further robust expansion is indicated for the summer months, but the survey's price gauges have also climbed to unsurpassed levels, which will add to inflation worries. These unprecedented output and price growth rates will inevitably lead to speculation about an earlier than previously expected tapering of Fed policy.

The IHS Markit US composite PMI, covering both manufacturing and services, showed one of the largest jumps on record in May, surging to a new high in the survey's 12-year history. At 68.7, up from April's prior record of 63.5, the latest reading is well above any level previously recorded by the survey (the survey's prior peak of 61.0 was seen in June 2014).

The steep rise in the PMI is consistent with GDP growth accelerating sharply in the second quarter, with annualised growth in double digits indicated by the latest numbers and around 7-8% signalled by the April-May average. 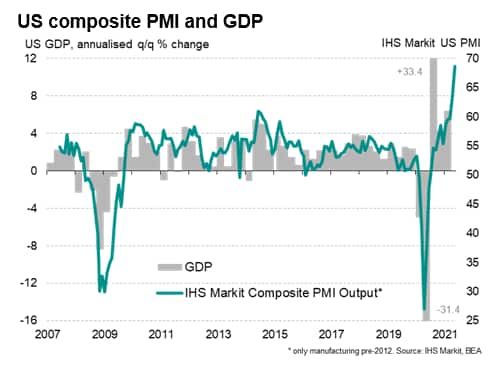 While manufacturing continued to report further solid growth, it's the service sector that led the acceleration of the economy in May, as business activity surged at a pace far in excess of all previous highs. 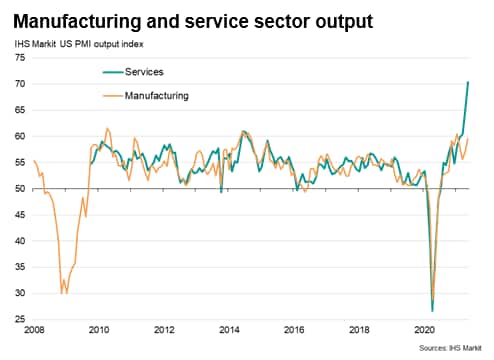 An improving order book situation meanwhile bodes well for strong growth to persist through the summer. New order inflows measured across both manufacturing and services hit by far the highest on record. Backlogs of uncompleted orders also continued to expand at one of the fastest rates in the survey's history, suggesting firms have a strong pipeline of work to ensure workforces are kept busy in the coming months. 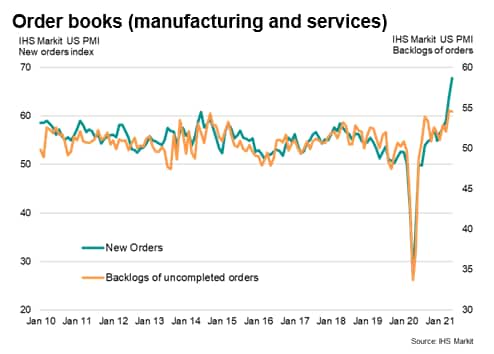 The surging growth of output and new orders was linked to a number of factors. Most commonly, firms reported that the easing of pandemic related restrictions both at home and abroad helped boost business volumes. The vaccine roll-out meanwhile also helped boost confidence, likewise both at home and in many overseas markets. The releasing of pent-up demand was also reported, unleashing spending that had been withheld over the prior year. Finally, stimulus measures - especially fiscal support - were reported to have helped drive expansion, notably in consumer-facing markets.

The combination of strong current demand, a solid pipeline of existing orders and elevated business confidence helped sustain strong jobs growth in May, albeit with the rate of employment growth slowing slightly, often linked to difficulties filling vacancies (and partly explaining the rise in backlogs of work). 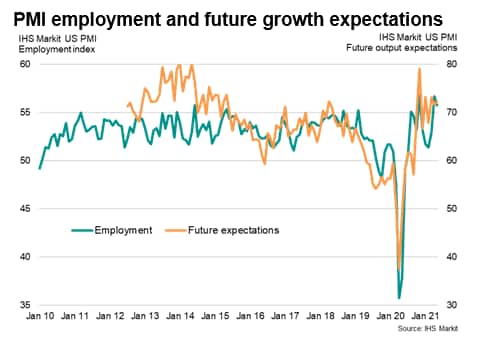 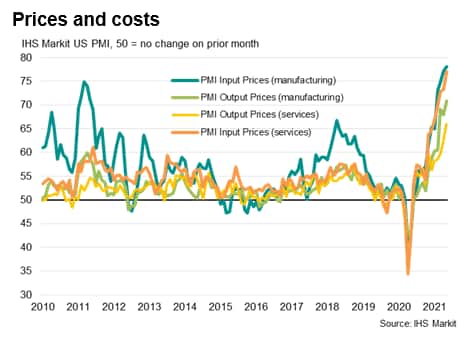 These price rises look set to feed through to higher consumer price inflation in coming months, the annual rate of which had already jumped to 4.2% in April. 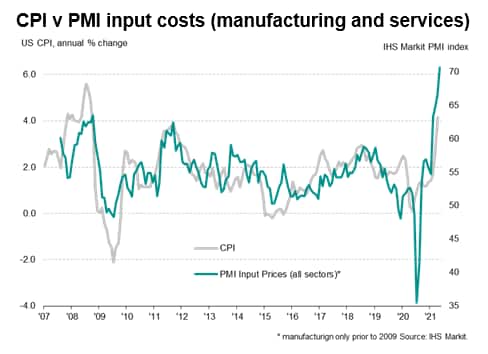 While the FOMC expects the jump in inflation to be temporary, any stickiness will inevitably lead to speculation that policy taper-talk may soon intensify, especially given the recent elevated PMI output reading. Historical comparisons with prior FOMC policy changes underscore how the PMI is firmly in traditional policy tightening territory. 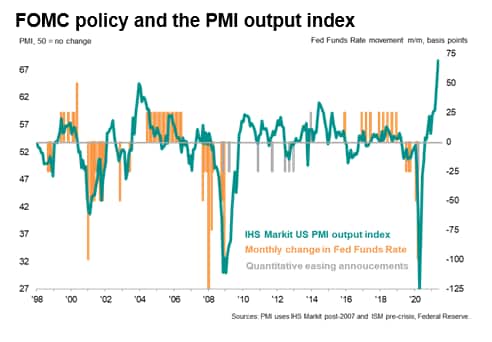