IHS Markit PMI™ survey data signalled a downward lurch in key manufacturing indicators in February. Growth of production and incoming factory orders slowed sharply to paint the weakest picture of output and demand for one and a half years, backlogs of work barely rose and job creation slowed. Price pressures meanwhile moderated amid the weakened demand environment. Business optimism about the year ahead also deteriorated, adding to the downbeat picture. 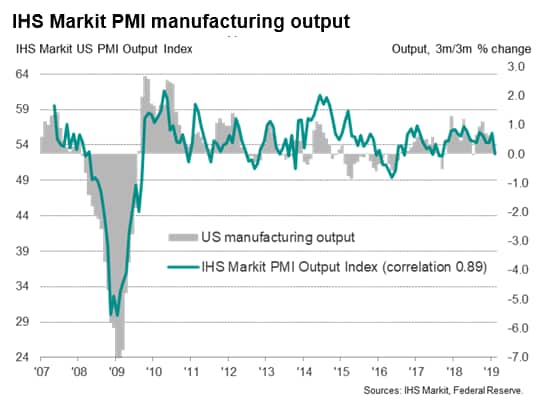 The seasonally adjusted IHS Markit Manufacturing PMI™ hit an 18-month low in February, down to 53.0 in February from 54.9 in January. Although still well above the 50 'no change' level, the PMI is a composite index of various survey indicators, and comparisons of these survey sub-indices with official data paints a gloomier picture.

Of particular note, the survey's output and new orders indices suggest that factory production and orders growth rates are close to stalling mid-way through the first quarter, albeit in part representing some pay-back after a strong January. 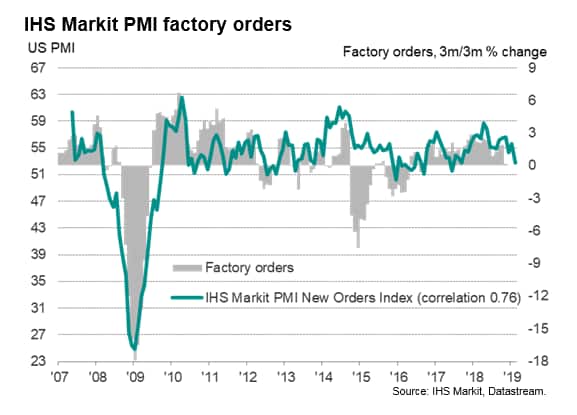 The output index exhibits an 89% correlation with the Federal Reserve's measure of manufacturing production on a three-month-on-three-month's basis (monthly changes in the official data are extremely volatile). As such the data can be used to accurately model the official data and predict forthcoming Fed releases. A regression analysis using the PMI's output index as an explanatory variable of the Fed's output gauge yields an adjusted r-square of 0.79, and indicates that the official three-month-on-three-month output growth rate will fall to near-stagnation. A similar analysis also shows a near-stalling of official factory orders and durable goods orders growth.

The employment index remained more resilient, though also fell in February to signal a moderation of jobs growth. Comparisons with official factory payrolls data point to 12,000 jobs being added during the month, almost half the 22,000 average seen during 2018. 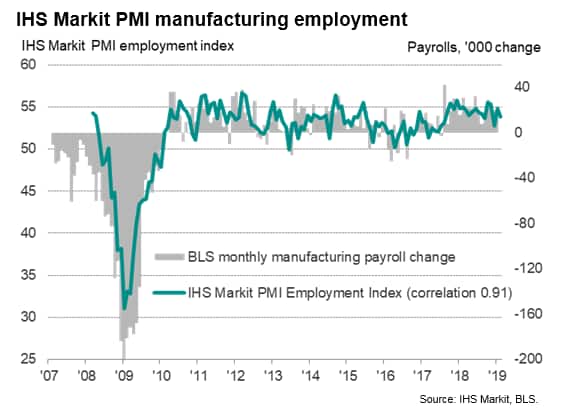 The weaker hiring trend not only reflected the more subdued current growth of order books, but also gloomier prospects for the year ahead. Worries regarding the impact of tariffs and trade wars, alongside wider political uncertainty, undermined business confidence, with expectations of future growth running at one of the most subdued levels seen for over two years.

Alongside the slowing of manufacturing activity there have been signs of fewer constraints on capacity, both at manufacturers and their supply chains. This easing has in turn led to a moderation of inflationary pressures. 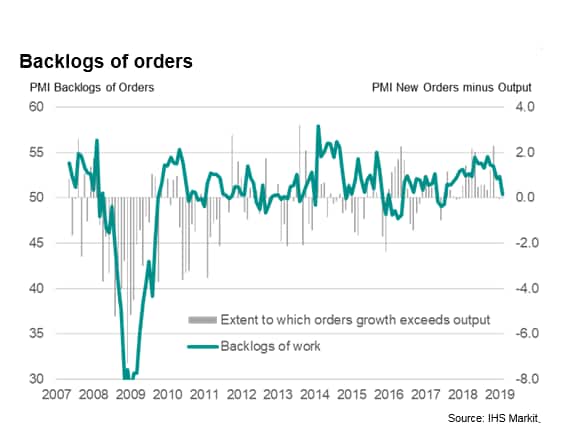 The survey showed inflows of orders growing faster than production throughout much of 2018, causing backlogs of work to rise sharply last year. However, order inflow and output trends have come back into line in recent months, hinting at an alleviation of production capacity constraints so far in 2019 as demand cools. Backlogs of works barely rose as a result in February, registering the weakest rise in the current 19-month growth sequence. This softening of backlogs of orders growth helps explain the recent pull-back in hiring.

At the same time, the incidence of supplier delivery delays has eased considerably since peaking in July 2018, reflecting weakened global demand growth as well as signs of companies moderating their inventory build. 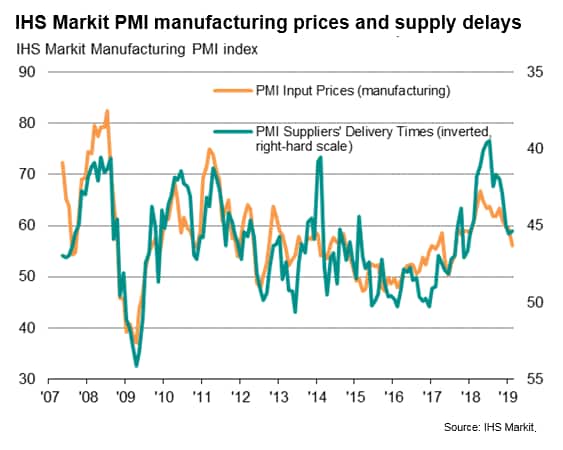 Price pressures on the wane

Price pressures have moderated accordingly alongside the easing of capacity constraints as demand and supply has begun to come back into balance. Manufacturer's input costs rose at the slowest rate for 18 months in February, albeit continuing to be pushed higher by tariffs. The moderation of cost pressures nonetheless bodes well for a further easing of wider inflationary trends. 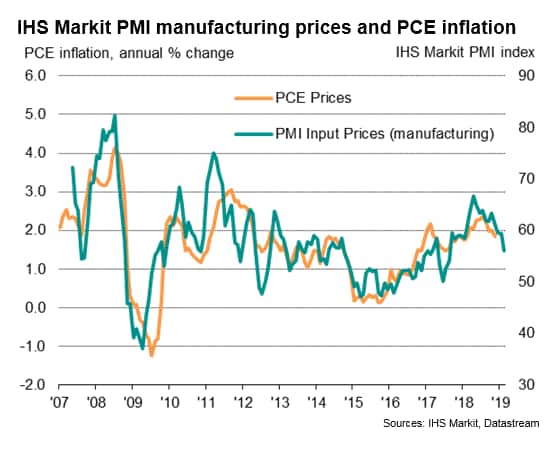