The October IHS Markit US PMI surveys showed a rebound in business activity from a weather-torn September, providing an early indication that the economy has started the fourth quarter on a solid footing. The upturn means the US has opened a gap in outperforming other major developed economies.

At 54.9 in October, the final seasonally adjusted IHS Markit U.S. Composite PMI™ Output Index picked up from 53.9 in September to lie just below the average of 55.1 seen so far in the year to date. 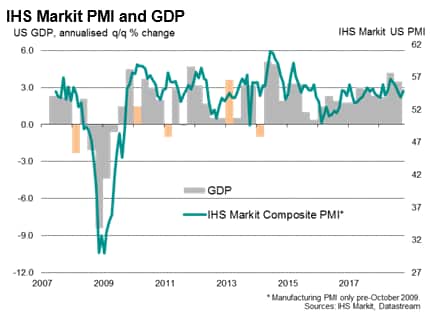 Strong domestic demand was a key factor reported to have propelled service sector growth higher in October. Combined with steady output growth recorded in the manufacturing sector, the survey data suggest the economy grew at its fastest rate since July. Comparisons with GDP indicate that the latest survey data translate into an annualised rate of economic growth of around 2.5-3.0%.

Expectations towards business growth over the coming years meanwhile spiked higher, suggesting companies are expecting a strong end to the year for the economy. The data therefore adding to signs that the US will see another quarter of solid economic growth, building on 4.2% and 3.5% rates of increase seen in the second and third quarters respectively, which represented the best back-to-back quarterly expansions for four years.

The composite PMI output index has a strong track record of accurately predicting official GDP data, albeit with notable divergences apparent in earlier years when the GDP data are considered to have failed to fully capture seasonal changes in the economy (see chart, where the orange bars highlight consistently weak first quarters to the year). The PMI has, over these years, tended to paint a more accurate picture of the underlying pace of economic growth.

The PMI data also offer an advantage over ISM survey data, which have tended to over-state growth in recent years (read more about these divergences in our recent paper comparing the two surveys and our note on their use in 'nowcasting'). 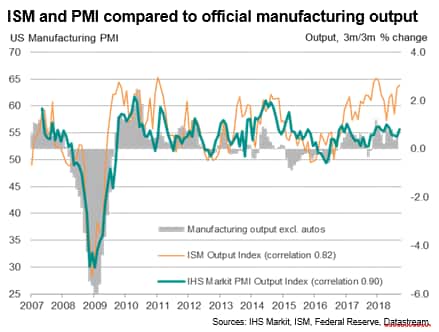 As a result of the improved performance in October, the US moved ahead of other major developed economies in terms of economic growth. In contrast, growth slowed in the UK and Eurozone, though showed a welcome pick-up in Japan.

The US's stronger performance was also highlighted by the US moving up the global manufacturing PMI rankings, beaten only by the Netherlands in October. 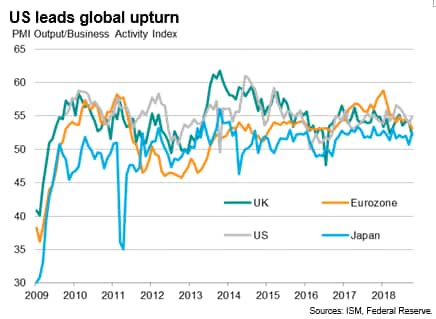 One word of caution comes from analysis of the survey's anecdotal evidence, which indicated that at least some of the improved performance reflected business returning to normal after weather-related disruptions in September.

With the combined September-October reading being the lowest since March, November's survey results will be important in providing insight into the extent to which the underlying trend of economic growth remains resilient in the face of widespread concerns about the impact of tariffs and trade wars. 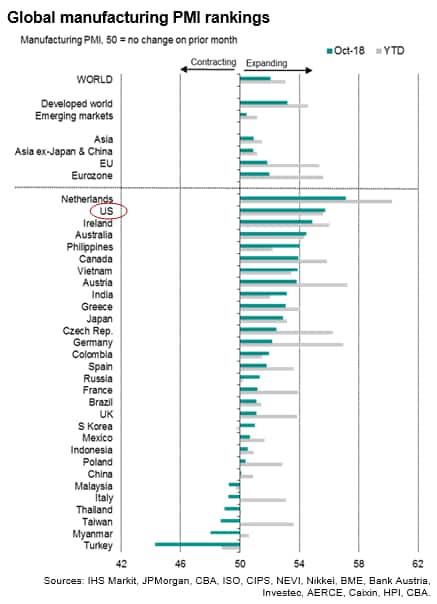