US manufacturing slump confirmed as production falls in line with PMI

US manufacturing output fell at a post-war record rate in April, corroborating earlier survey data from IHS Markit which pointed to a dramatic production slump. Flash PMI data for May will be watched for signs that April will have hopefully been a low-point, as measures taken to control the COVID-19 outbreak start to ease. 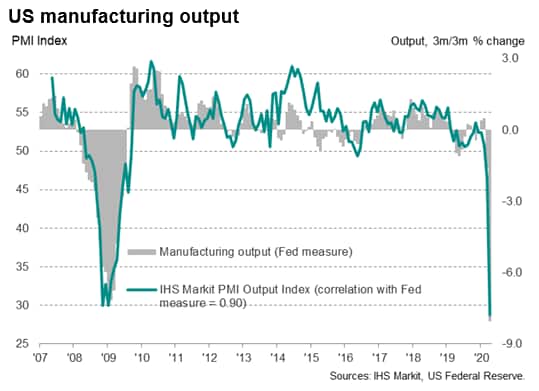 Official production data, compiled by the Federal Reserve, found manufacturing output to have slumped by 13.7% in April. Coming on the heels of a 5.5% drop in March, this left production in the latest three months down by a post-war record of 8.1% on the prior three months. By comparison, the steepest three-month rate of decline seen during the height of the global financial crisis was 7.2%.

The official data corroborate PMI survey data from IHS Markit, which also showed the rate of decline of manufacturing output accelerating in April beyond that seen during the financial crisis. The PMI's sub-index measuring output Index ( a better guide to production than the headline PMI) fell from 46.5 in March to a new all-time low of 28.8 in April. With any reading below 50 indicating a net drop in production during the month, the latest reading pointed to an especially severe drop in output. In fact, a simple regression-based model had estimated that the latest PMI reading was roughly indicative of output sliding at a quarterly rate of 7%; close to the actual 8.1% decline registered by the official data.

Over its history since 2007, the IHS Markit PMI output index has exhibited a correlation of some 90% with the three-month-on-three-month rate of change in the official data (a growth rate widely used when comparing surveys with official data, as month-on-month changes tend to be too volatile to reveal the underlying trends).

The PMI surveys also collect anecdotal evidence on the causes of changes in variables such as output, demand, exports and employment. These survey responses highlighted that production was hit to increasing extents in March and April by three headwinds emanating from the COVID-19 pandemic.

In the first instance, factory closures were widely reported as states temporarily shut down many non-essential businesses, or in other cases social distancing measures led to reduced productivity.

Second, supply chains have been disrupted in the US and globally (in fact showing the highest incidence of supplier delays in over 20 years of data collection globally in April), reducing production capabilities in those firms still operating. 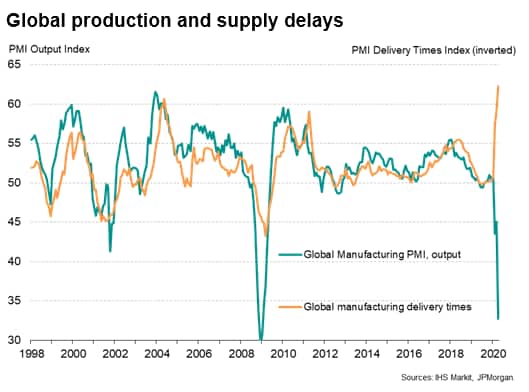 Third, demand slumped from US customers and in export markets, with orders plummeting from corporates and households alike as lockdowns meant reduced spending on many items. The PMI survey's new orders index plunged to a new all-time low in April, indicating that factory orders fell at a quarterly rate approaching 20%. 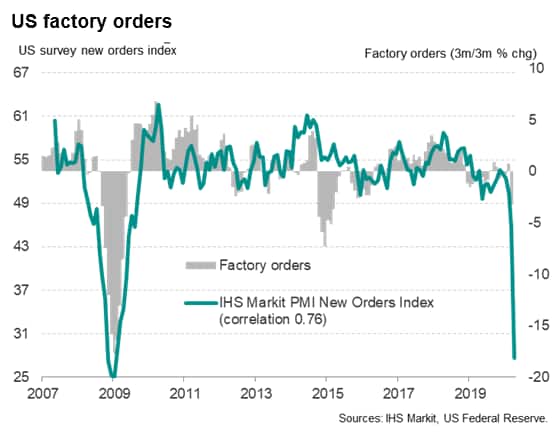 Will the production trend improve in May?

Given that measures taken to contain the coronavirus have started to be eased in some cases, it seems likely that the rate of decline of manufacturing output could likely moderate in May.

As well as producing the PMIs, IHS Markit compiles indices of COVID-19 containment measures, which allows us to see how aggressively measures taken to contain the virus have been applied in each country, and also how quickly they are being relaxed. These indices are based on information relating to issues such as closures of schools, non-essential shops and restaurants, as well as restrictions on public gatherings, internal mobility and external borders. We also forecast how these are expected to change in coming months, based primarily on government announcements.

Restrictions are already easing in the US in May and, barring a second wave of infections, look set to continue to be gradually relaxed further in coming months.

We will see if this easing of containment measures translates into a moderation of the manufacturing downturn with the publication of May flash PMI data on 21st May. Data will be released for the US as well as the Eurozone, UK, Japan and Australia. 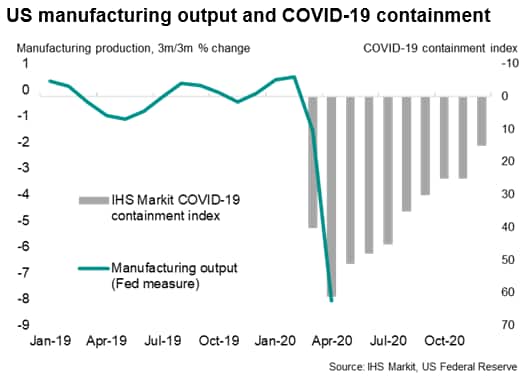