US manufacturing limps into fourth quarter, but underlying trend is improving

Despite falling in October for a second straight month, there are signs that the underlying trend in US manufacturing output is improving.

US manufacturing output fell 0.6% in October, dropping for a second successive month after a 0.5% decline in September. Compared to a year ago, production was down 1.5%, its steepest annual fall since May 2016.

Weakness was in part a consequence of strikes at the GM autos factory, and excluding autos the manufacturing decline was a far more muted 0.1%, according the Federal Reserve's statisticians.

The October decline leaves output flat in the latest three months compared to the prior three months, indicating a stagnant underlying production trend at best. However, the flat picture is an improvement on the declining three-month trend seen earlier in the year (production fell 0.8% in the second quarter before rebounding 0.3% in the third quarter). Moreover, given that the latest numbers include the GM strike, the underlying picture appears to be one of a manufacturing sector that has potentially turned a corner, at least in terms of its rate of decline. In fact our colleagues at Macroeconomic Advisers estimate that, outside of autos, manufacturing growth has been trending higher since May.

This tentatively brighter picture tallies with the IHS Markit Manufacturing PMI™ survey, from which the output index rose for a third successive month in October to reach a six-month high of 52.4. The survey's forward-looking new orders-inventory ratio also rose in October, reaching the second-highest since November of last year. New orders inflows picked up and stronger than expected demand contributed to a reduction in warehouse inventories; all of which bodes well for production in November. 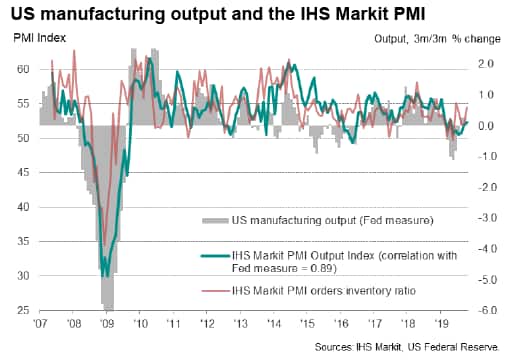 That's not to say the survey data are pointing to a manufacturing revival: a straightforward linear regression model suggests that the current IHS Markit manufacturing PMI output index is indicative of production falling at a quarterly rate of 0.3%, an improvement on the 0.8% rate of decline signalled in July and August but clearly still negative.

The IHS Markit PMI survey is, however, considerably more upbeat that the ISM survey. Again using regression analysis to determine an implied three-month-on-three month growth rate for manufacturing output, the ISM survey's output index, at 46.2, is indicating a 2.0% decline in October. 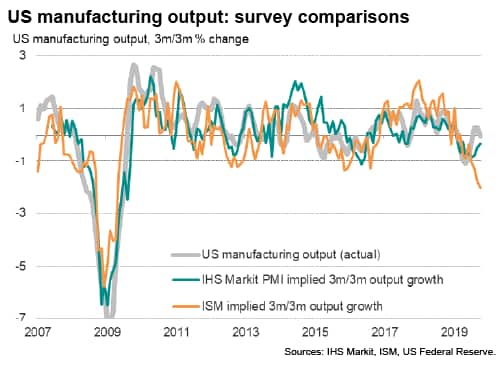 The recent divergence of the ISM and IHS Markit indices is striking, but it is clear from the implied growth rates derived from the regressions that the latter is seemingly more in line with the official data than the ISM. This outperformance is in fact not uncommon: over the past 12 years, the IHS Markit index has exhibited a correlation of 89% against the three-month growth rate in the Fed's gauge of manufacturing output compared to an 80% correlation exhibited by the ISM index.

We believe that the more reliable advance indications of official data provided by the IHS Markit survey relative to the ISM reflects a number of factors explored in more detail here, which includes the fact that the IHS Markit survey panel is based on a representative mix of small, medium and large companies, while the ISM index focuses on larger firms. The IHS Markit survey also specifically asks companies to report only on US facilities whereas we understand that no such geographical limit is set on the ISM questionnaire. The consequence is that the ISM is potentially biased towards reflecting the overall performance of large multinationals rather than domestic US production trends. Thus, the ISM index seems to be more influenced by global manufacturing trends than the IHS Markit index (see chart below), meaning the ISM survey loses accuracy when anticipating the Fed's gauge of US production. 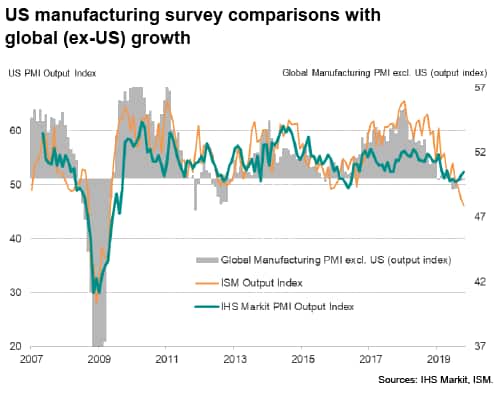 More will be known about the health of US manufacturing in the fourth quarter with the release of the IHS Markit flash PMI surveys on 22nd November.