Early indicators of economic performance in March point to the US outperforming among the largest developed economies, though growth resumed in the UK and Eurozone leaving only Japan in decline.

The growth disparities in part reflected differing COVID-19 containment measures, but also vaccine roll-out progress and the accompanying lift to confidence this has achieved in the US and the UK in particular. Stimulus measures likely also played a key role, notably in the US. 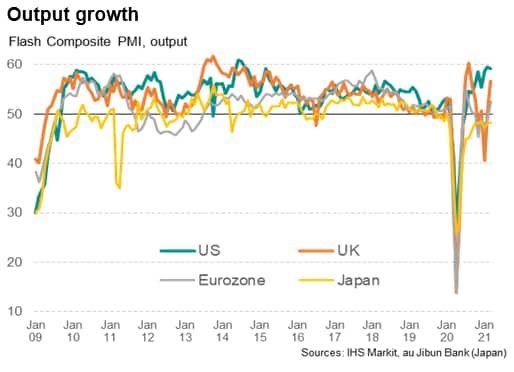 Flash PMI survey data showed business activity in the United States rising sharply at the end of the first quarter of 2021, rounding off the economy's best performance since the third quarter of 2014. The IHS Markit composite PMI registered 59.1 compared to 59.5 in February, resulting in a first quarter average of 59.1. The quarterly average signifies strong economic growth of around 1.5%, or approximately 5% on an annualised basis, which builds on a 1.0% rise in the fourth quarter of last year.

Impressive growth was also recorded in the United Kingdom as business activity rebounded from two months of contraction. The composite PMI jumped from 49.6 to 56.6, albeit still ending the first quarter with an average of 49.2, pointing to a modest decline of GDP after the 1.0% expansion seen in the fourth quarter.

Growth also perked up in the eurozone, led by Germany, with the composite eurozone PMI rising from 48.8 in February to 52.5, registering the first expansion of business activity since last September. The first quarter average of the eurozone PMI, at 49.7, indicates a broadly stable economy, improving on the 0.7% fall in GDP seen in the fourth quarter.

Japan lagged behind the other major developed economies, with the au Jibun Bank PMI (compiled by IHS Markit) at 48.3 in March, up slightly from 48.2 in February to reach a three-month high but resulting in a first quarter average of just 47.9.

Manufacturing rises across the board

A common theme among all four economies is the recovery of manufacturing, which persisted into March, led by a record surge in factory production in the eurozone. Japan's producers reported the second-strongest gain since 2018, with March's growth falling just shy of that seen in February. Meanwhile, the UK saw a marked expansion of production after output came close to stalling in January and February. 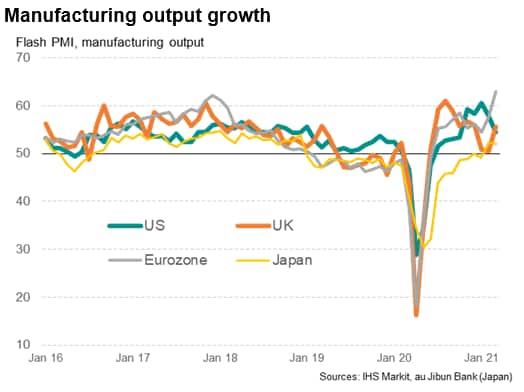 The US bucked the improving manufacturing trend, recording the weakest expansion of production since last October. However, the slowdown appears temporary, linked mainly to supply disruptions - which hit a record high. Encouragingly, new orders rose at the sharpest rate since mid-2014, boding well for output in the coming months assuming supply can meet requirements. However, note also that supply constraints rose in the eurozone, Japan and the UK during March, hinting that production could also become further constrained in these economies unless supply lines improve.

More disparate trends were seen in the service sector in March. In the US, business activity across service providers rose at a rate unequalled since mid-2014, with the rate of expansion accelerating slightly on an already-steep pace seen in February. A robust expansion was also seen in the UK after four months of continual decline. Activity continued to fall in the service sectors of the eurozone and Japan, however, dropping for the seventh and fourteenth successive month respectively, albeit with the rate of contraction in the eurozone easing to the weakest since the latest downturn began last September. 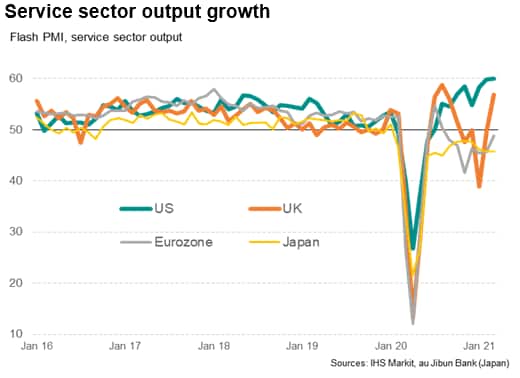 The varying service sector trends can be linked to different government containment measures for COVID-19. In the US, containment has been eased markedly in the last two months, and are now the least restrictive since the pandemic began. This has therefore provided a major boost to service sector activity, especially among consumer-facing companies. 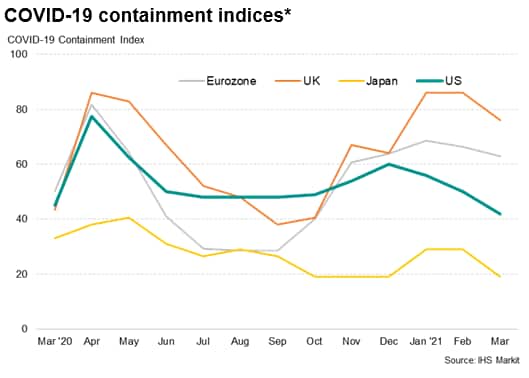 * IHS Markit's COVID-19 Containment Index is based on a basket of measures applied by governments to control the spread of the pandemic, such as non-essential business closures, school closures and travel and mobility restrictions linked to social distancing policies. As these measures are tightened, the index rises towards 100 and a relaxation of measures causes the index to fall towards zero.

Likewise in the UK, a third national lockdown was instigated in January but March saw schools reopening, facilitating more business activity and transportation. The eurozone also saw some easing of containment measures, albeit with many restrictions tightening towards the end of the month in some member states.

Japan has not fitted the pattern in relation to virus containment measures, but this has been evident for some time, and is in part thought to be due to its relatively greater reliance on foreign travel for key sectors such as tourism and exports. However, differing vaccine roll-outs and behavioural considerations also likely apply.

Both the US and UK have achieved high vaccine roll-out rates already, reaching 38% and 45% of the populations with at least one vaccine jab. This has facilitated more business activity, notably in the US, where adherence of COVID-19 restrictions has also been lower than other countries in many states. Japan, in particular, is estimated to have seen more voluntary social distancing among the population than the US.

By comparison, both the eurozone and Japan have so far struggled to vaccinate significant proportions of their populations. France, Germany and Italy, for example, have so far managed to only vaccine 13% of their populations, whereas Japan has reached less than 1%, having only commenced with vaccinating health workers in mid-February.

Anecdotal evidence from companies underscores how these differing vaccine progress rates have affected business sentiment. In the UK in particular, improved optimism about the year ahead (which hit an all-time high in March) has been linked to hopes that the vaccination programme will mean many businesses can return to something akin to normal trading in the not too distant future as the economy is opened up. This has already boosted demand for many goods and services as companies and households prepare for the coming months. 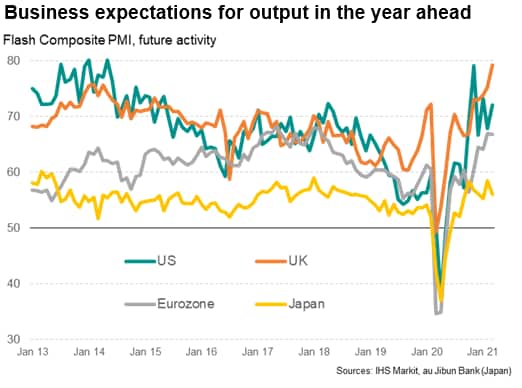 Similarly, in the US, signs of life returning to normal have helped boost spending, supercharged by additional stimulus. March saw an additional $1.9 trillion fiscal package passed into law, with cheques already on their way to households.

In contrast, optimism relating to vaccination programmes has been far less evident in Japan and, to a lesser extent, the eurozone, contributing to weaker spending on services in particular. 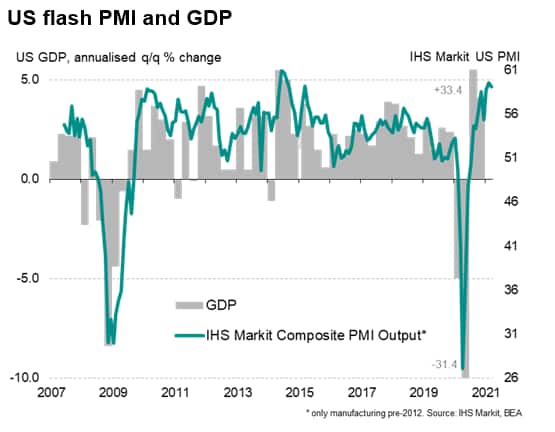 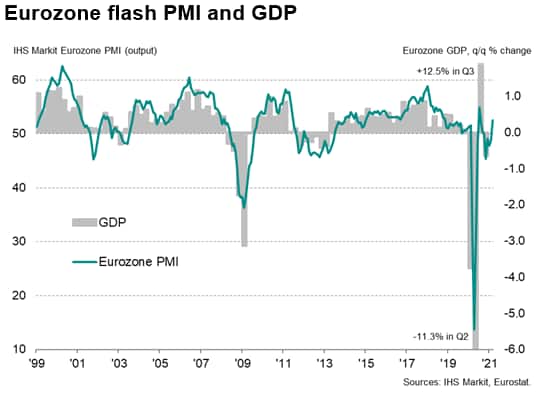 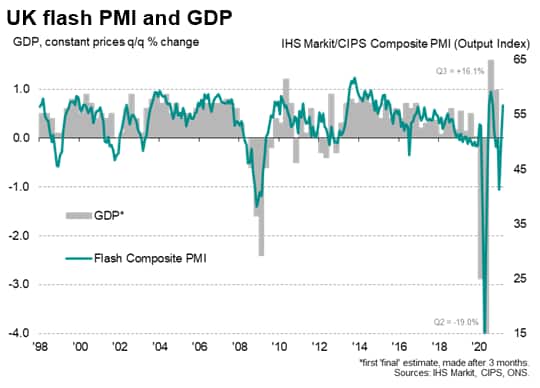