US imports, exports on upward track

After reaching a record high in 2015, US containerized imports are likely to stay on an upward track this year as housing market gains strengthen and import prices remain subdued.

The housing market, a major driver of containerized imports, is expected to strengthen this year despite an imminent federal funds rate hike, with existing home sales and housing starts forecast to reach 10- and nine-year highs, respectively.

As home sales expand, furniture imports, which account for at least 10 percent of total US containerized inbound trade, tend to go in the same direction, as do imports of other home goods including lamps, kitchenware, cooking and other major appliances. Similarly, as home construction activity rises, demand for imported housing inputs such as logs and lumber, miscellaneous hardware, tacks and nails, ceramic tiles, and granite/marble tends to increase, as well.

Real disposable income is expected to gain 3.1 percent in 2016, on top of a strong 3.6 percent increase in 2015, which bodes well for imports of discretionary goods such as apparel, TVs and other retail products.

Meanwhile, sales of light vehicles are forecast to expand to a record 17.76 million units this year, boosting production of motor vehicles while triggering solid demand for containerized auto parts. Still, foreign investment in Mexico's automobile industry is growing, which could curb growth in the auto parts imports, particularly from Northeast Asia.

Import prices are cheaper because of a stronger dollar and falling oil prices, and likely will remain subdued through 2016. Excluding oil, import prices are expected to decline 0.8 percent in 2016 following a 2.7 percent slide in 2015, which should support overall demand for containerized imports versus domestically produced substitutes.

Taking all this into consideration, I anticipate US containerized imports to expand 5.5 percent in 2016, to a new peak of 21.1 million TEUs, mainly because of increasing household spending and moderately weaker import prices. Northeast Asia again will lead the expansion, adding approximately 2.8 percentage points to overall 2016 growth.

One major downside risk to the forecast is the possibility of a too-soon too-big federal funds rate increase that could derail the U.S. economic expansion.

Although the US and 11 Pacific Rim countries in October finally agreed to terms of the Trans-Pacific Partnership after five years of negotiations, the free trade pact still needs ratification from individual members. The US has free trade agreements with six of the 11 TPP partners, so if all member nations ratify the pact, the US would gain five trade partners: Japan, Vietnam, Malaysia, Brunei and New Zealand.

So, what is the likely impact of a TPP deal on the trans-Pacific trade after it takes effect? Partly because China isn't part of the deal, and partly because most tariffs won't be eliminated immediately but phased out over a number of years, the impact likely will be moderately positive over the short term and increasingly favorable over the medium term.

US containerized exports, meanwhile, will likely end a two-year decline in 2016 as global demand recovers and the dollar begins a multiyear descent against other currencies. Exports declined 2.6 percent in 2015 to a two-year low of 11.6 million TEUs. 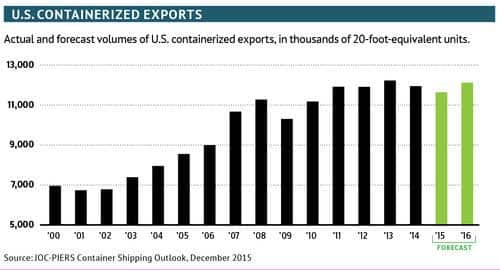 Without doubt, global economic conditions have eased moderately despite the improving performance of the US economy. Manufacturing activity in China and other emerging economies struggled throughout 2015, dampening demand for US exports of raw materials such as scrap metals and some industrial resins.

Conditions are such that IHS has downgraded slightly its projection for global growth for 2016, from 3.0 percent to 2.9 percent, with a particular eye toward the flagging performance of the emerging economies and Europe. Japan's economic activity is sluggish, bordering on recession, in fact, while the eurozone's recovery lost momentum in the third quarter for the second straight three-month period, likely because of a decline in net exports. In China, third-quarter data underscored its two-speed economy, with the industrial and construction sector easing and the service sector expanding.

Looking ahead, the eurozone is expected to perform marginally better in 2016, while the Japanese economy will continue to limp along. Economic activity in China, however, is expected to decelerate further, while the outlook for other large emerging markets is mostly grim, with Brazil and Russia expected to stay in recessionary phase during 2016.

Excluding the North American Free Trade Agreement partners of the US, Canada and Mexico, however, IHS anticipates the global economy should improve moderately to 3.0 percent growth in 2016 from 2.7 percent in 2015, while the dollar is still expected to reach a new peak in the first half of 2016 and initiate a multi-year descent afterward.

The inflation-adjusted, trade-weighted value of the dollar for the broad index of trading partners is expected to increase 4.3 percent between the third quarter of 2015 and the third quarter of 2016. The dollar likely will reach a peak value in the first half of 2016, putting it 16.9 percent ahead of the second-half 2014 average. It is then expected to decline between the second half of 2016 and 2018, succeeded by gentler weakening, leading to a 16.0 percent decline between 2016 and 2025.

With that in mind, I anticipate exports to rebound in 2016, growing 4.0 percent to 12.1 million TEUs. That recovery, however, won't be enough to offset the losses in the prior two years, accounting for only 99 percent of the peak volume last seen in 2013.

Northeast Asia will lead the gains, adding 1.4 percentage points to overall export growth as demand from that region recovers modestly.

The downside risks to the export forecast remain mostly geopolitical, but I'm also concerned the dollar will continue to strengthen beyond the first half of the year, and there's always the possibility of a big oil shock that could derail the global economy.

RT @IAPHWorldPorts: Join us for our next webinar discussing a united, low emission and digitised industry with speakers Kitack Lim, Secreta…