It was a long, hard slog, but in 2016, real (inflation-adjusted) median income for US households finally surpassed its 2007 level after two consecutive years of strong (and statistically significant) growth. With a 3.2% increase adding on to the previous year's 5.2%, US real median household income reached $59,039 in 2016, according to the Commerce Department - enough to edge out not just its pre-recession (2007) level, but also the previous high point of $58,665, which was achieved in 1999. Mean household income, which weights upper-income households relatively more than the median, had already achieved the milestone of passing its pre-recession peak in 2015.

The years 2015 and 2016 have been a turning point for US household incomes, as increasingly robust employment and wage gains, combined with continued modest consumer price inflation, have enhanced the wellbeing of many American households. While the size of the increases in real median income in 2015 and 2016 are remarkable, so was the length of the stagnation that preceded them. Although things have started to improve, it took nine years for real median household income to dig out of the ditch triggered by the Great Recession, during which time many middle-class families were forced into a lower standard of living. 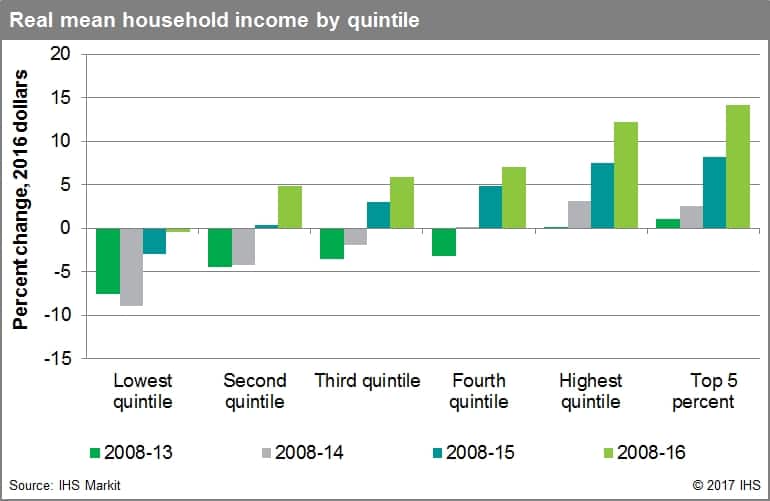 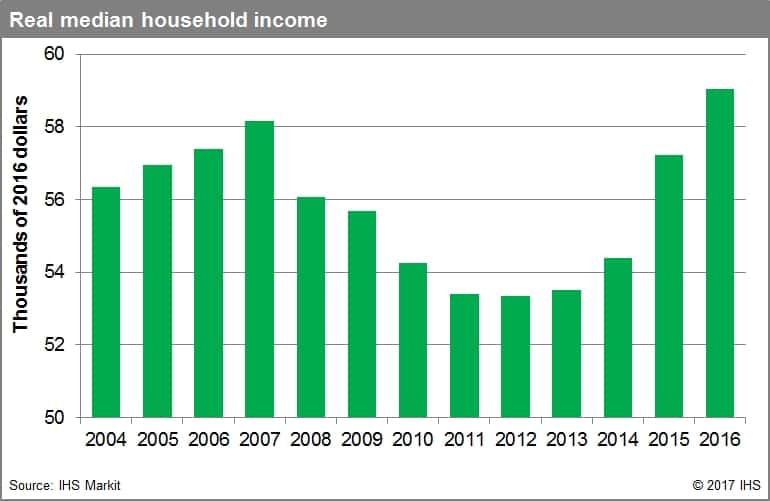 The recession was particularly brutal for lower-income families, and even now, the differential scale of the recovery on households across the income distribution is stark. The recovery has been much slower for those in lower income brackets. While the average income of households in the highest quintile surpassed its 2008 level in 2013, it took two more years for this recovery to filter down to households in the second- and third-lowest quintiles. Meanwhile, the bottom-most quintile still has yet to fully recover all of the lost ground.

Still, the improvements in real median income have been instrumental in lifting more Americans out of poverty. In 2016, the official poverty rate - the proportion of Americans beneath the poverty line - declined by 0.8 percentage point to 12.7%. Adding on to 2015's 1.3-point decrease, this has brought the poverty rate within 0.2 point of (and not statistically different from) the 12.5% level seen in 2007, the last full year before the recession.

Looking ahead, we expect median household income to make further gains in 2017 and 2018, and the poverty rate to keep sliding down. This will assist in restoring some balance and uniformity to consumer spending patterns.