Stocks related to gambling in the United States received a jolt yesterday as the Supreme Court ruled 7-2 to overturn the Professional and Amateur Sports Protection Act of 1992, which essentially banned sports betting in states where it wasn't already legal and in practice.

The potential for a dramatic increase in sports betting caused some gaming related stocks to pop in trading on Monday, May 14th. While the news was positive for some, the concern that this may actually hurt sports betting in Nevada weighed on the casino stocks, though that impact was certainly more muted than the upside seen elsewhere in the group. With the likelihood of increased legal sports gambling, even if Nevada loses share that share may be coming from a much larger pie.

The ruling was not great news for short sellers, especially those targeting Scientific Games Corp, who added 1.7m shares to short positions over the last month, an increase of nearly 30%. With the price up more than 11% on Monday, it's likely that some of the recent short sellers have headed for the exit, at least for the time being, but the higher price may induce some short sellers to add or enter a new position. 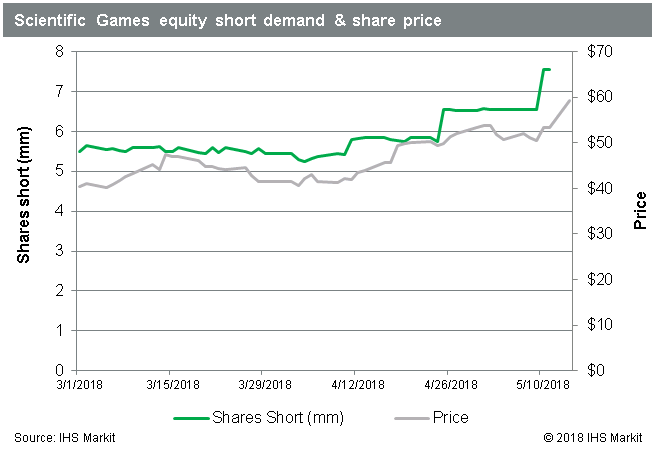 Short sellers covered 13% of their position in Boyd Gaming Corp in the month prior to the Supreme Court ruling, as shares rallied off the YTD low on April 2nd. That may have served to limit the reaction in the price today, which was up less than its comps, though the price did advance more than 3%. That puts the shares back above where they started 2018, with short demand down 25% since the start of the year. 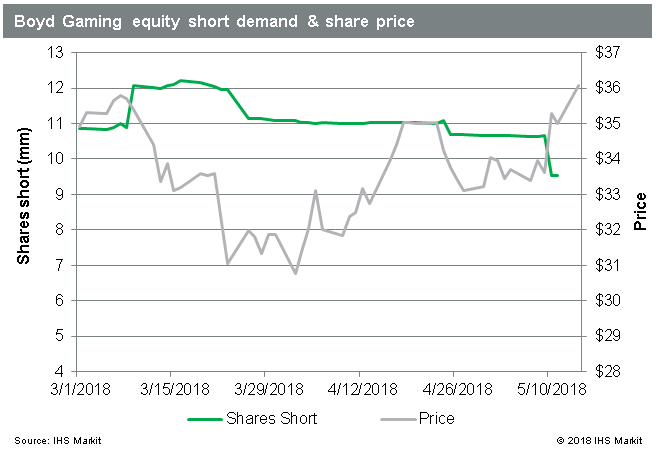 Short sellers have also been covering positions in Churchill Downs, reducing shares short by 4% in the month prior to the ruling. The firm announced plans on February 28th to purchase casinos located in Mississippi and Pennsylvania. The firm's CEO noted in a press release at the time that, "Presque Isle will give us a foothold in Pennsylvania which has recently passed legislation authorizing real money online gaming." The closing price of $292.6 on May 14th is a new all-time high for the stock, however, there were more than 60k shares in new borrows on the day, suggesting at least some contingent of short sellers are negative on the stock, at least in the short term. 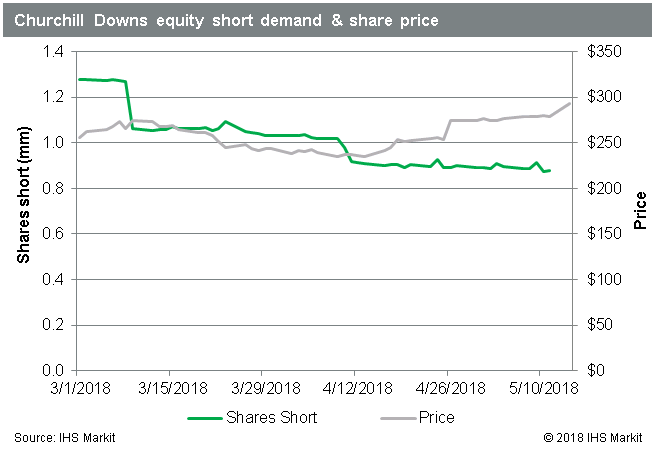 It remains to be seen how states will react to their newfound freedom, though this certainly opens the door to a large scale expansion of sports betting. Against the backdrop of a declining audience for NFL games last season, this would have to be seen as a positive for the league and, as a knock-on effect, good news for firms like Disney, whose ESPN unit has invested heavily in covering the NFL.

Other likely beneficiaries include the state of New Jersey, who had lobbied in support of legalized sports betting since Jon Corzine took up the cause as governor in 2009, having missed an opportunity carved out in the original 1992 legislation which would have allowed them some exceptions for sports related gambling activities. That carve-out was for states which had previously allowed sports gambling, but required that the states resume within 10 years of the regulation.

As noted above, the implications for the large casino operators are less clear. That uncertainty is reflected in smaller share price moves, going in both directions. Wynn Resorts and Las Vegas Sands trading lower on the day, which may as much as anything reflect the fact that Macau operations contribute significant revenues to both firms, reducing the impact of any change in US regulations. While the narrative of sports related gambling shifting away from Las Vegas may eventually hurt the revenues of these firms, it will certainly be some time coming.