Flash PMI survey data indicated that the US economy started the third quarter on a disappointingly soft footing. At 51.6 in July, the seasonally adjusted IHS Markit Flash US Composite PMI Output Index edged up from 51.5 in June and remained higher than the three-year low recorded during May, but still signalled only a modest expansion of private sector output.

The PMI surveys for manufacturing and services collectively point to annualised GDP growth of just 1.6%, up only very marginally from a lacklustre 1.5% indicated by the survey in the second quarter. 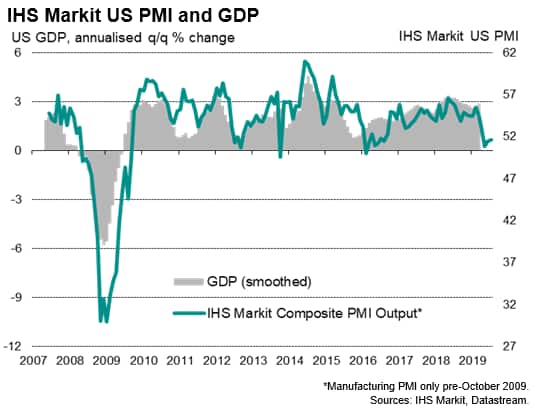 The overall picture of modest growth conceals a two-speed economy, with steady service sector expansion masking a deepening downturn in the manufacturing sector. While service sector growth remained robust, in part fuelled by rising consumer spending, the survey's gauge of factory production slumped to its lowest since August 2009. At current levels, the survey indicates that manufacturing output is falling at a quarterly rate of over 1%, led by an increasing rate of loss of export sales. 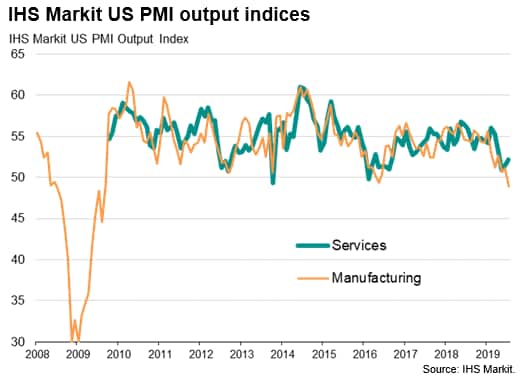 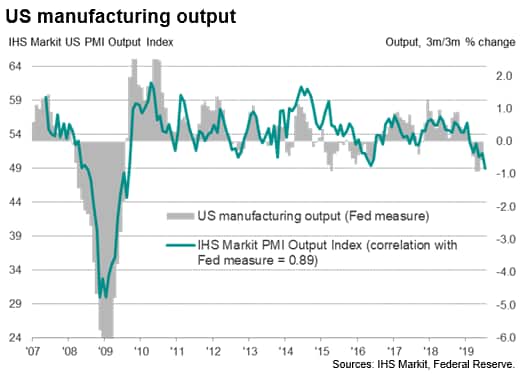 The survey's employment gauge has meanwhile fallen to a 27-month low, down to a level consistent with 130,000 jobs being added in July. That compares with signals of an average of 200,000 in the first quarter and 150,000 in the second quarter. Manufacturers are shedding workers at the fastest rate since January 2010 and service sector job creation is now down to its slowest since April 2017. 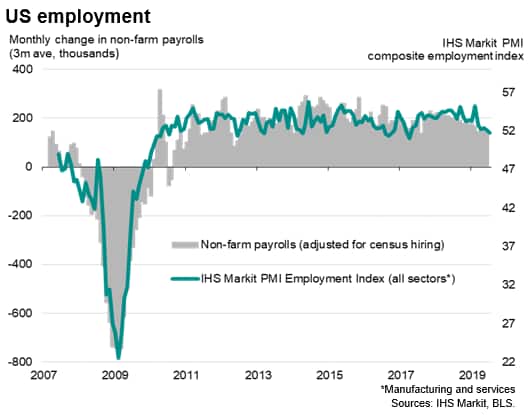 The July survey found evidence of firms becoming increasingly cautious in relation to hiring amid an increasingly uncertain outlook. Future prospects have darkened to the gloomiest since comparable data were first available in 2012, according to the latest survey, suggesting that companies may look to tighten their belts further in coming months, dampening spending, investment and jobs growth. Geopolitical worries, trade wars and increasingly widespread expectations of slower economic growth at home and internationally have all pulled business optimism lower.

Inflationary pressures meanwhile remained subdued, with cost burdens rising only marginally during July to register the second-weakest monthly increase since September 2016. While service providers reported a shift to net discounting on their selling prices on average, a sharper rise in factory gate charges across the manufacturing sector was recorded, in part reflecting the pass-through of tariffs. However, the overall rise in prices charged for both goods and services was only marginal and the joint-weakest recorded since April 2016. 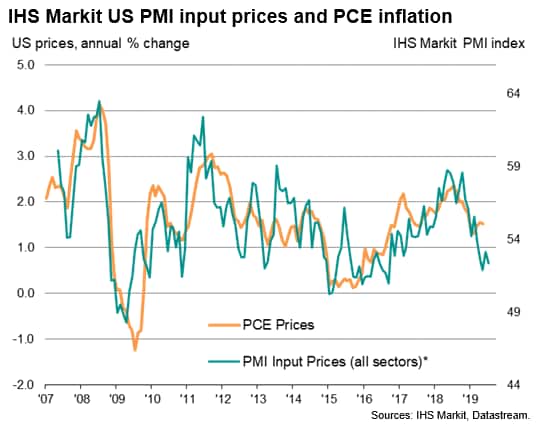 The flash PMI survey data come ahead of the July 31st FOMC meeting, and add support to dovish views on the economy in advance of an expected cut in interest rates for the first time in over ten years. However, as our chart shows, the PMI's composite output index is only just in territory which would normally be associated with a dovish tilt, highlighting how many perceive a rate cut to merely be 'insurance' against any further weakening of the economy. 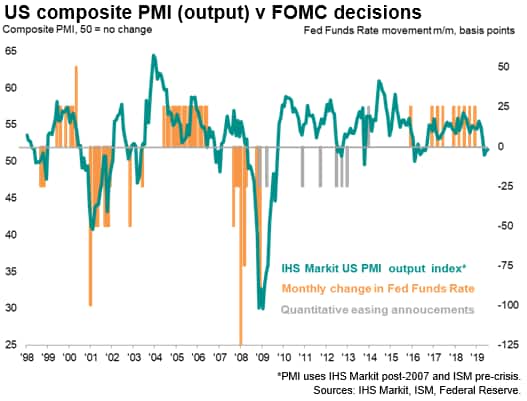