A welcome upturn in the headline index from the flash PMI adds to evidence that the worst of the US economy's recent soft patch may be behind us, though fourth quarter growth still looks weak and hiring remains lacklustre.

Adjusted for seasonal factors, the IHS Markit Flash US Composite PMI Output Index rose to 51.9 in November from 50.9 during October. The improvement signals the fastest rate of expansion of the combined manufacturing and service sectors since July, which was in turn spurred by improved inflows of new business. Having fallen close to stagnation in October, registering the weakest rise for over a decade, inflows of new business rebounded in November to indicate the sharpest rise in demand for goods and services since July.

Particularly encouraging signs came from the goods-producing sector, where a fourth consecutive monthly improvement in the manufacturing PMI output index adds further evidence that the industrial downturn bottomed out in the summer. The November rise in production was the largest recorded since January, buoyed by goods orders growing at the fastest rate since April and exports increasing for a second successive month. At 52.2, up from 51.3 in October, the flash Manufacturing PMI was the highest for seven months as a result.

The signs of life weren't limited to manufacturing. Growth of service sector activity had slipped in recent months to the lowest since 2016, and among the gloomiest since 2009, but the rate of expansion picked up in November to the strongest since July. 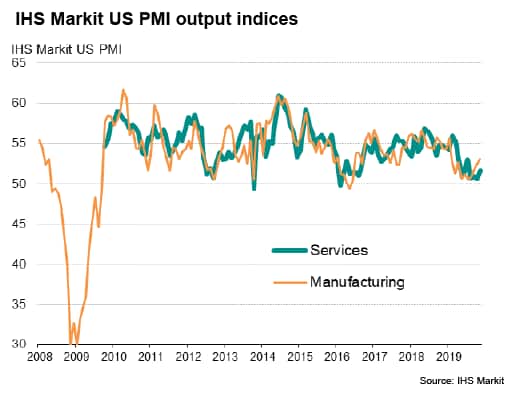 Nevertheless, it would be wrong to get too excited by the numbers. Although improving, overall rates of growth of both output and new business remained lacklustre by historical standards, commensurate with GDP growing at a modest annualised rate of approximately 1.5% in the fourth quarter so far.

Underscoring the still-gloomy picture, comparisons of the manufacturing PMI output index with industrial production data merely points to a stabilisation of output after declines in prior months. And although service sector new business growth quickened to a three-month high, the increase was again only marginal and one of the weakest seen in recent years since the recession. 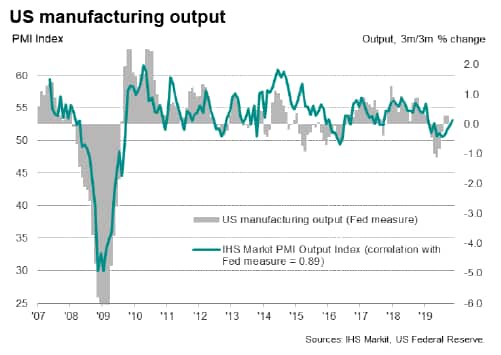 Hiring picks up from lows

Despite coming from low bases, the improvements in the output and order book data are nonetheless encouraging, especially as the upturns prompted firms to take on staff again after two months of headcount reductions, primarily to help deal with rising backlogs of work. We note, however, that the PMI's employment index is historically consistent with payrolls rising at a modest monthly clip of approximately 100,000, which is well below the average 167,000 rise seen so far this year. 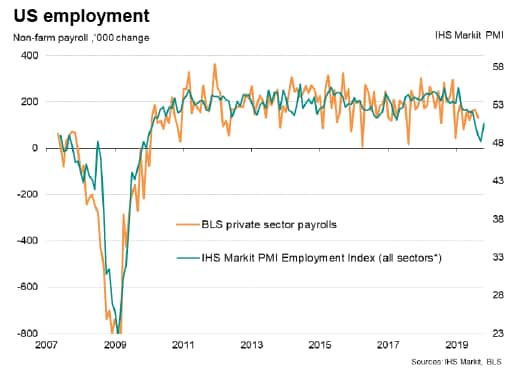 Similarly, although up on lows seen back in the summer, business expectations for future output continued to run well below levels seen at the start of the year, and even dipped slightly lower in November. The lack of optimism reflected heightened anxiety regarding trade wars and geopolitical uncertainty, as well as recent low customer enquiry numbers and the weakness of new sales volumes. 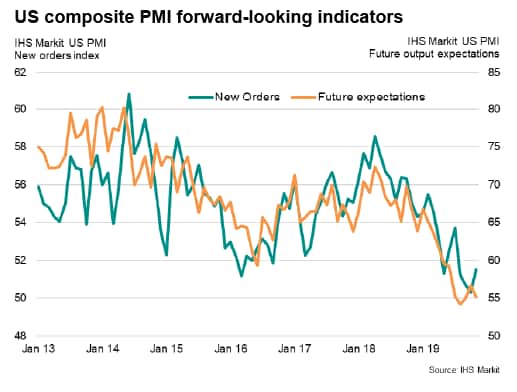 The still-weak-but-improving flash PMI data are consistent with the forecasts from our colleagues at Macroeconomics Advisers, who expect GDP growth to slow to around 1.5% in the fourth quarter but rebound to above 2% in the first quarter of next year. The strengthening in part reflects improved consumer spending and the reversal of temporary drags on growth, including the GM plant strikes and problems at Boeing.

From a PMI-perspective, to help track growth momentum, the coming months will need to see some further material upturns in the services and manufacturing PMIs to lift growth above 2% in the first quarter of 2020. Historical comparisons suggest that the composite PMI would need to rise closer to 54 (from its currently level of 51.9) to be consistent with GDP growth in excess of 2%. 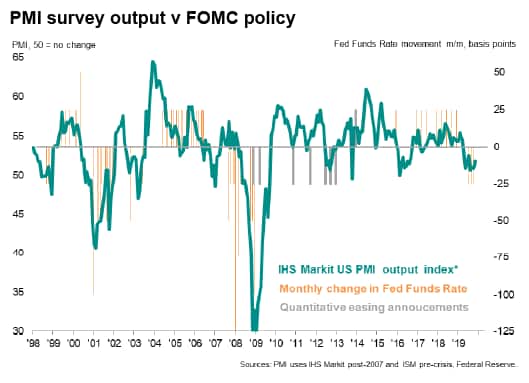