US flash PMI falters to three-year low in May

Growth of US business activity slowed sharply in May, according to the latest survey data, as trade war worries and increased uncertainty dealt a further blow to order book growth and business confidence. The data indicate reduced second quarter growth and increased pressure on corporate earnings, as well as softer employment gains and lower inflation.

A decline in the headline 'flash' PMI to 50.9 in May, its lowest for three years, pushed the IHS Markit survey gauge down to a level historically consistent with GDP growing at an annualised rate of just 1.2% mid-way through the second quarter. That compared with a signal of 1.9% in April. The survey has a good track record of accurately anticipating GDP growth, and suggests the economy is going through its toughest patch since 2016. 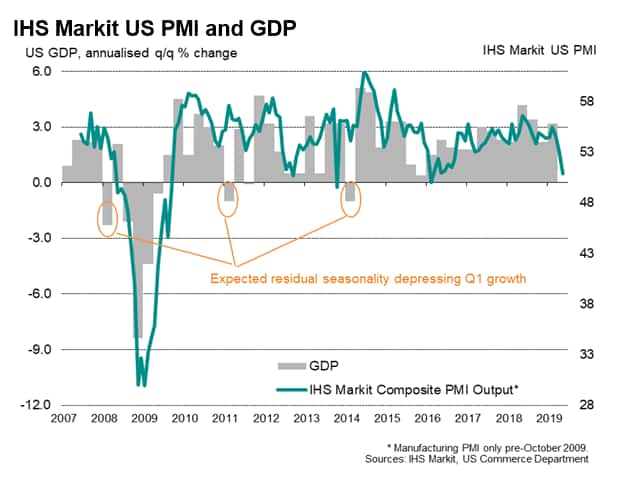 Worse may be to come, as inflows of new business and future expectations both deteriorated in May.

New orders across both manufacturing and services showed the weakest rise seen this side of the global financial crisis. Manufacturing fared worse than services, with factory new orders declining for the first time since August 2009. The survey data have been consistent with falling manufacturing output since February but suggest that the sector's woes intensified in May to mean factories will likely act as an increasing drag on the economy in the second quarter. Trade wars and geopolitical uncertainty remained top of the list of concerns among manufacturers, alongside signs of slower sales and weaker economic growth both at home and in key export markets. 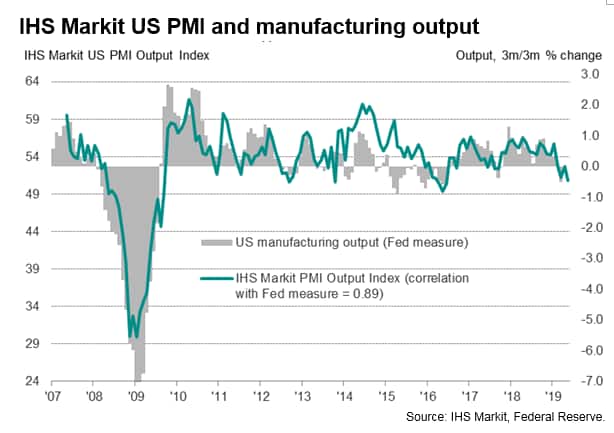 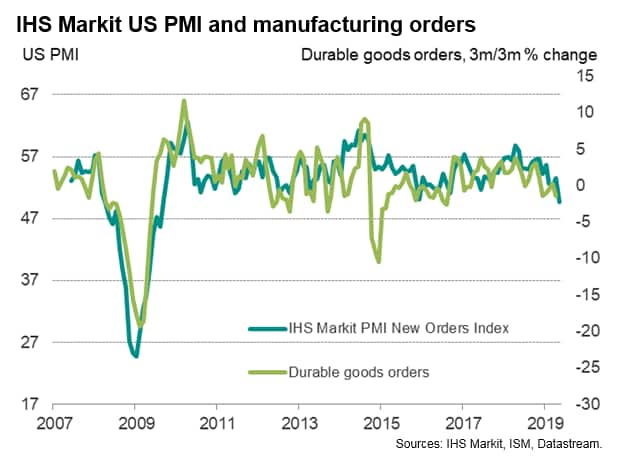 However, the survey also brought signs of weakness spreading to the service sector, where business growth slumped in May to one of the weakest rates since the global financial crisis. With the service sector's performance being a key gauge of domestic demand, this broadening-out of the slowdown poses additional downside risks to the outlook. 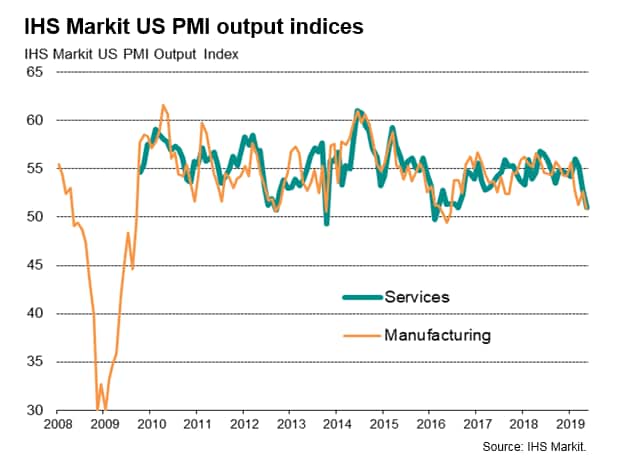 Business confidence about the coming 12 months has meanwhile slumped to the lowest since at least 2012, when comparable data were first available, causing firms to tighten their belts, notably in respect to hiring. Jobs growth in May was the weakest for over two years and down to a level broadly indicative of non-farm payrolls rising by 120k.

Reduced confidence was commonly attributed to hesitation among clients and increased uncertainty, which were both often linked to global trade tensions.

Input price inflation eased for the third month running in May, despite continued comments from survey contributors regarding the ongoing impact of tariffs. Instead, weak demand prompted increased price competition among suppliers. The slower increase in costs and greater competitive pressures underpinned a renewed fall in output charges, the first such decline since February 2016. 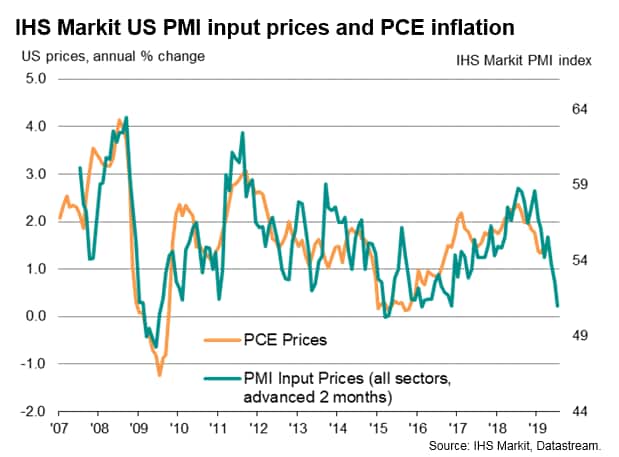 The drop in the surveys price gauges suggests that inflationary pressures continued to moderate. The composite input price index covering both goods and services has a strong correlation with future CPI and PCE inflation rates, and signals that both annual consumer price and PCE inflation could weaken in coming months as pricing power fades alongside weaker demand.

The weakness of order books reflects lower sales growth which, alongside the recent drop in pricing power, bodes ill for corporate earnings in the second quarter. 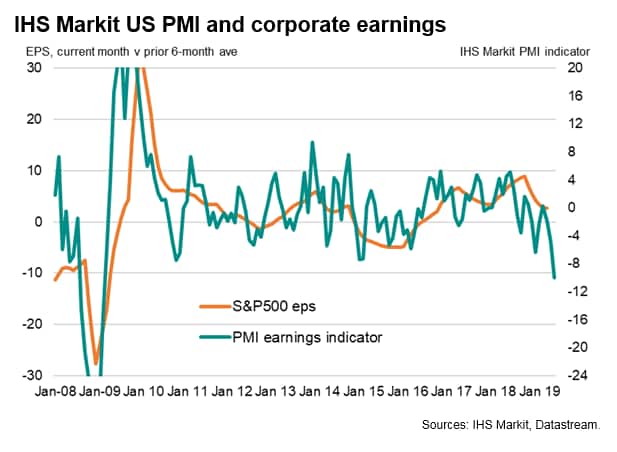 To estimate the trend in earnings growth we have compiled an indicator based on five components, all derived from IHS Markit's US PMI surveys, which provide insights into sales growth, pricing power and profitability:

The above components are calculated by first comparing the current month's value to their trailing six-month average, and the resulting values are then weighted together according to the weights given above.

Please note that the indicator uses a scale based on standard deviations, so units do not represent indicated changes in actual earnings and is merely designed to provide a simple guide to earnings trends

We compare the resulting indicator against the reported earnings per share in S&P500 companies over the prior 12 months, as measured by Case Shiller, and specifically the current month's EPS value against the prior six-month trailing average. The index exhibits a correlation of 75% against this measure of earnings growth with an advanced lead of four months, which rises to 83% if a three-month moving average is used to reduce some of the indicator's volatility.

The average earnings growth momentum signalled by the indicator in the first quarter is the lowest recorded since February 2009.