Business activity, order book and jobs growth all accelerated to five-month highs in December, according to flash PMI data, buoyed by improved business confidence, rising domestic sales and further signs of renewed life in export markets. However, the overall pace of expansion remains subdued by standards seen earlier in the year, largely reflecting a manufacturing sector that is struggling to gain growth momentum.

Growth at five-month high at year-end

Adjusted for seasonal factors, the IHS Markit Flash US Composite PMI Output Index rose to 52.2 in December, edging up for a second straight month. The improvement signalled the fastest rate of expansion of the combined manufacturing and service sectors since July, in turn driven by the strongest inflows of new business seen over the past five months. 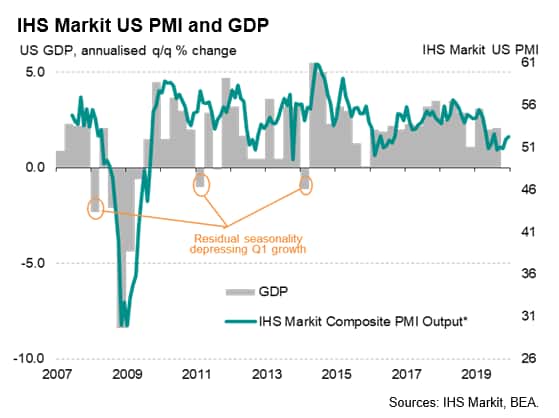 New business gains were in part buoyed by reviving export demand, with foreign sales of goods and services increasing at the quickest pace since June. However, as the upturn was mild overall, the data suggest that firmer domestic demand was the principal driver of new order growth.

The rate of job creation also struck a five-month high as firms boosted capacity in line with the recent improvement in demand. Expectations regarding future output likewise improved, climbing to a six-month high. 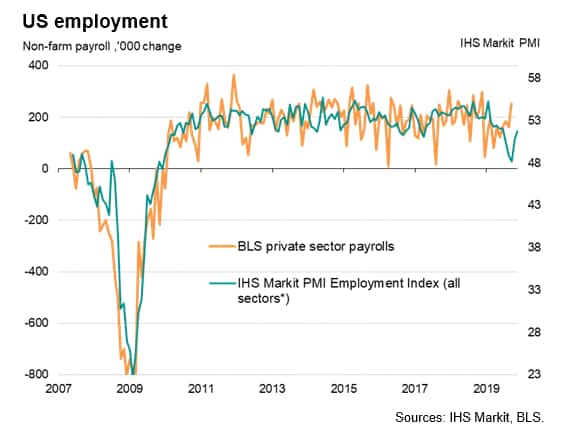 December's expansion was led by an improved performance of the vast services sector and, although the manufacturing upturn lost some pace, expectations for business activity in the year ahead lifted higher in both sectors to suggest the expansion will continue to gain momentum as we head into the New Year. Optimism reflected reduced fears over trade wars and more favourable financial conditions.

The surveys therefore bring welcome signs of the economy continuing to regain growth momentum as 2019 draws to a close, with the outlook also brightening to fuel hopes of a strong start to 2020.

The brighter news needs to be caveated, as the overall rate of economic expansion signalled by the surveys remains well below that seen this time last year, commensurate with GDP rising at an annualised rate of just over 1.5%.

Comparisons with official data highlight how manufacturing output growth remains worryingly weak, albeit off the lows seen earlier in the year, and commensurate with broadly flat factory production based on implied change in the official Fed measure during the fourth quarter. 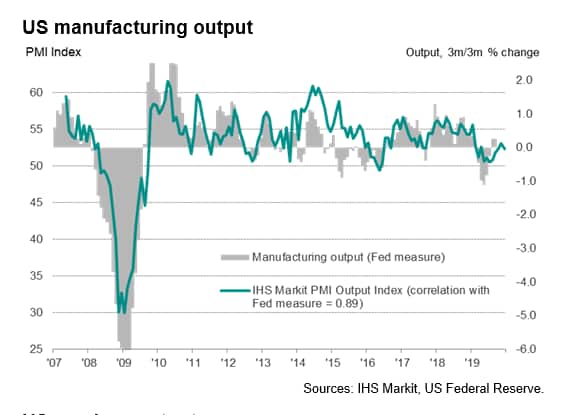 Although service sector business growth quickened to a five-month high, the overall increase signalled for the fourth quarter was merely in line with that seen in the third quarter, which services GDP rose at annualised rate of just under 1.5%. 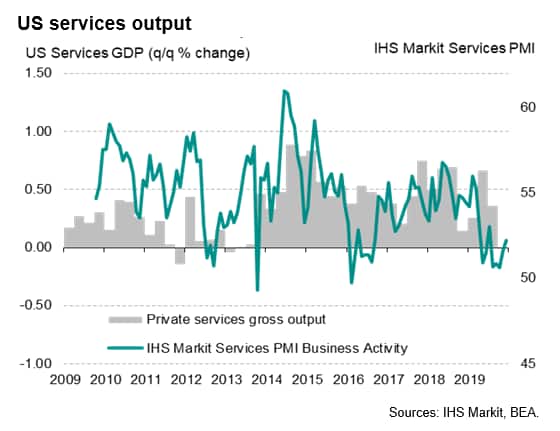 Importantly, the welcome signs of improvement help to ward off recession risks and should keep the Fed on hold in coming months. The upward trajectory in the surveys support our expectations that the US economy is on course to see another year of above-potential GDP growth of approximately 2.2% in 2020.

However, from a PMI-perspective, to help track growth momentum, the coming months will need to see some further material upturns in the services and manufacturing PMIs to lift growth above 2% in the first quarter. Historical comparisons suggest that the composite PMI would need to rise closer to 54 (from its current level of 52.2) to be consistent with GDP growth in excess of 2%. The forward-looking indicators such as new orders and future expectations have at least moved in the right direction in December, boding well for further gains in January. 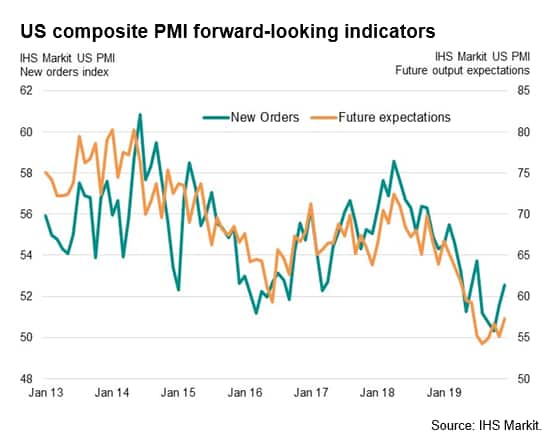