US exports of poultry

US poultry exports forecast to modestly rebound in 2016

US poultry exports tumbled 13.0 percent in 2015 for a total volume of 3.5 million metric tons as China, South Korea, Angola, and other major markets banned all poultry imports from the US since the beginning of 2015, following a multistate outbreak of highly pathogenic avian influenza. Meanwhile, the Russian market continues to be closed for all US poultry since August 2014, a retaliation response to sanctions over Russia's annexation of Crimea. 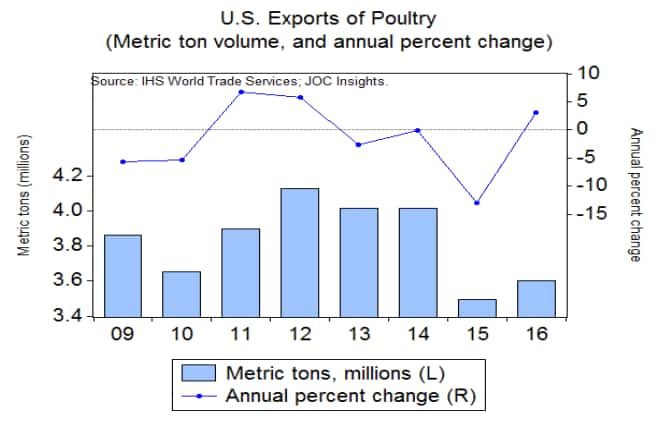 Market conditions have been very tough last year, not only because of the import bans in major markets but also the US dollar strength. Looking forward, a modest rebound of 3.1 percent is expected for 2016, partly thanks to an easy year-over-year comparison base. Moreover, the dollar strength has eased, and top buyer Mexico recently lifted its ban for US poultry products from all US states except the state of Indiana. Also, South Africa ended its import ban on US poultry early this year.

China subtracted most from export growth during 2015

Among the major export markets, China subtracted most from trade growth during 2015, approximately 5.5 percentage points. Meanwhile, Angola, which has become an important market for US poultry exporters, subtracted 2.5 percentage points from growth. On the upside, we found Mexico and Canada each adding 2.7 and 0.3 percentage points to export growth in 2015, respectively, as their import restriction was imposed mostly on the affected producing states. 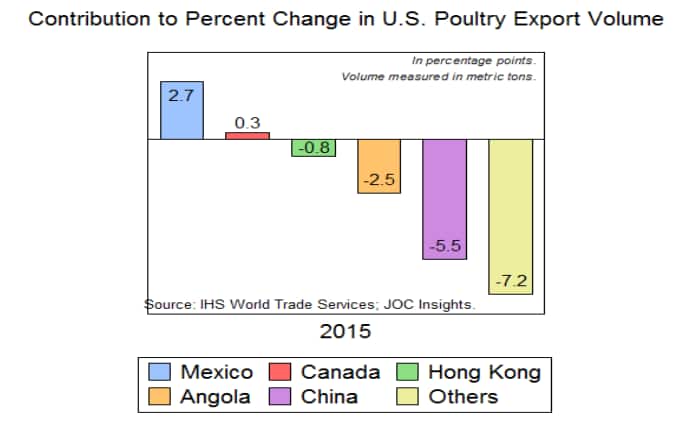 Mexico is top export market since 2010

There is no country that holds more than half of the market, not even one-third of the market, which reveals how well diversified the poultry export trade is. However, the data highlight great volatility within the export markets, particularly in recent years. 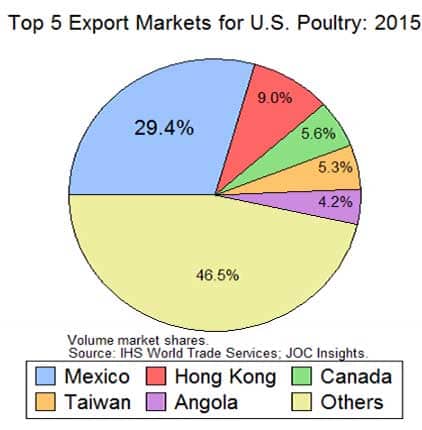 Between 2006 and 2009, China was the biggest export market for US poultry as measured by metric ton volume, but Mexico regained that spot in 2010. In 2015, Mexico held almost 30 percent of the market, while China's market share went down to zero due to the import ban, from almost 6 percent the year before. Therefore, China did not show up in the top 5 export markets ranking chart in 2015, as it did in 2014.

China imported more poultry from Brazil and the European Union 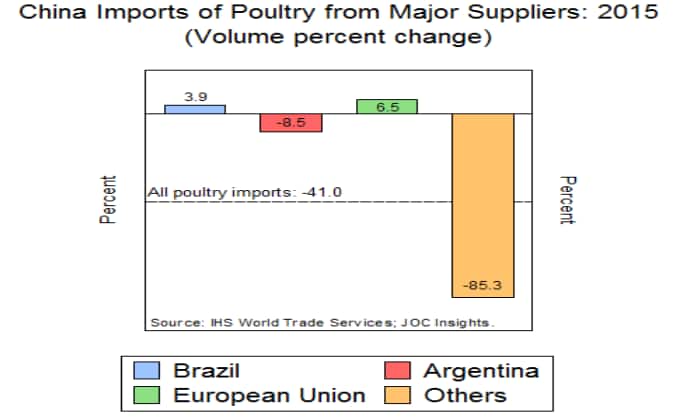 In 2018 #Australia exported 31.51 million metric tons of #bauxite worth over $975 million USD. Download our infogra… https://t.co/ury5QFCbXd

@IHSMarkit Commodities at Sea suggests that South Korea's plan to reduce its reliance on #crudeoil carried through… https://t.co/glrH3M9ItU