Hello! I'm Kathy Hall, the executive editor of OPIS PetroChem Wire. I've been writing about U.S. petrochemical markets for more than 20 years and what a wild ride it has been so far! I'll be giving quarterly market recaps for one of my favorite markets, ethylene. So, watch this space for more ethylene price insights. Please use the comments section to leave feedback and any suggestions you have for trends you'd like to see addressed in these pieces.

Plant after plant, I laid out a list of new ethylene facilities that were under construction that year, the first of which was scheduled to start up in 2017. Ethylene prices would have to fall. And, as the market played catch-up getting its polyethylene and other downstream plants started up, margins for those plastics would expand.

"Your time will come," I said, in conclusion.

And that time is here. Ethylene has moved into the basement, while polyethylene has stayed in the penthouse.

While it's nice for me to feel as if I was quite prescient, the journey had some surprising plot twists over the past seven years. 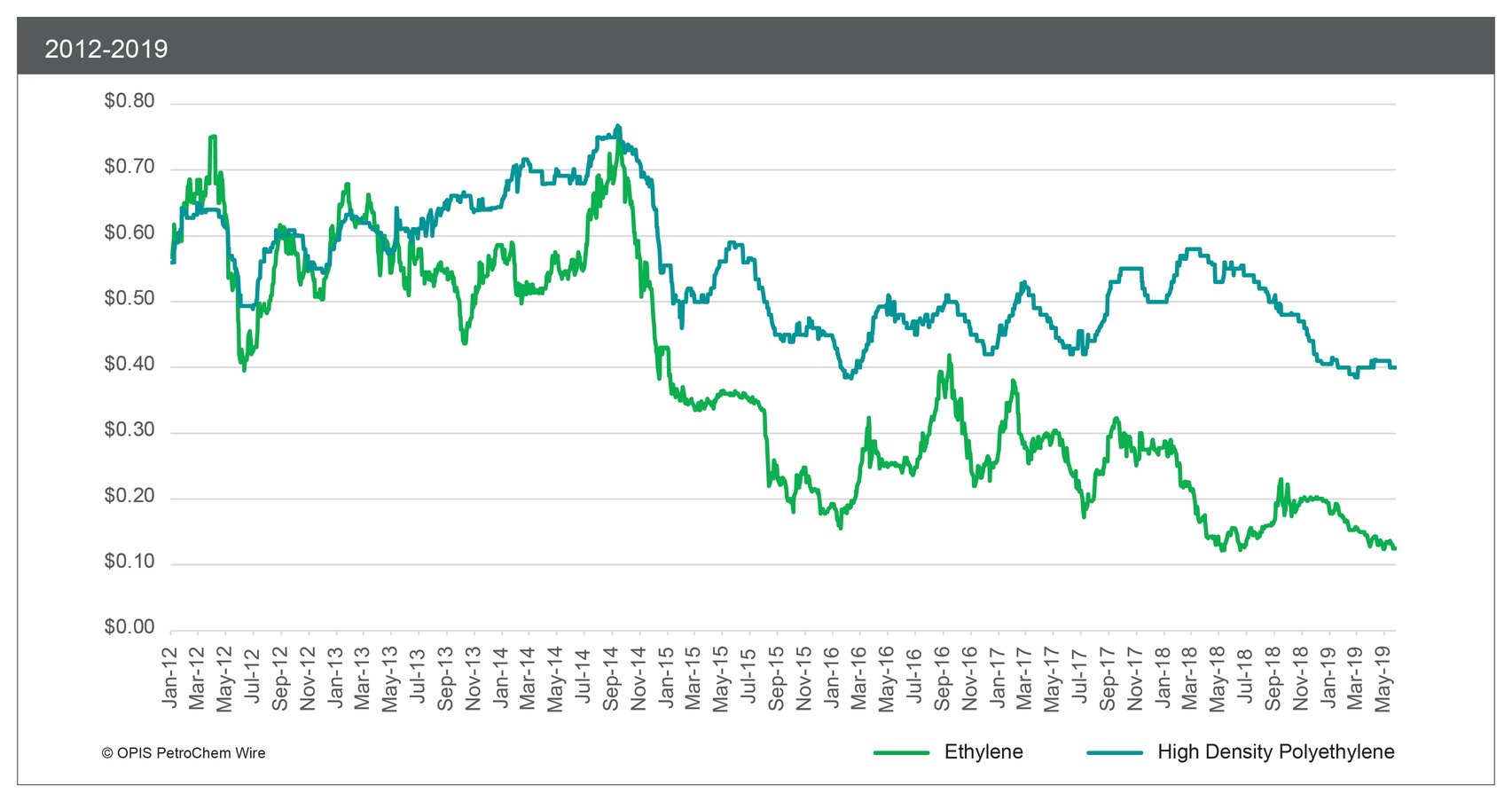 Unexpected events (ethylene plant outages), realized prophecies (new plant start-ups) and drama that affects all markets (weather) have made for some turbulent times for both ethylene and its child, polyethylene.

Read about the basics of how these petrochemical markets work together in this blog.

And here we are. Ethylene has not only shed 30% of its value since January, trading activity has also slowed. The most common market call these days is not "bullish" or "bearish." It's "boring."

What is going on this year? Where is everyone?

A few factors have contributed to this slump in liquidity and its effect on ethylene prices.

As the number of participants has ebbed, the appetite for risk has naturally waned. And this has created a rather timid marketplace. Ethylene is in a "contango" shape, meaning that the near-term months are priced lower than farther-out time frames. A contango market usually follows the cost of storage and is fundamentally viewed as a weak market.

An unusual nuance of the contango in the current ethylene market, however, is how small it is. The premium of July over June, for example, is a scant one-eighth of a cent. This is less than the cost of storage. This adds to the reluctance of participants to get too busy in the forward markets - the price is practically flat to today's price. Low risk, low reward, no fun.

Forget about trading for a moment - ethylene producers are also struggling in a low-price environment. While producers certainly do not price all of their ethylene at the spot price, that low price is a largely unprofitable one. Even with NGLs languishing at 2019 lows, costs to produce ethylene with anything other than ethane is a losing proposition for most.

Co-product prices are attractive - polymer grade propylene is still above 30 cents - however, cracking propane or butane leaves the ethylene portion of the process at a negative number. Even using ethane, costs to produce ethylene are below 10 cents at this writing, and spot ethylene is 12-14 cents in the NOVA well at Mont Belvieu. Not much cause for celebration.

So, is there any good news? For petrochemical producers, yes. Ethylene may be in the basement, but every producer of ethylene uses most of it to produce other chemicals. So integrated supply chain margins are robust.

As a commodity itself, however, ethylene is having a rough year, being (rightfully) snubbed by those looking to build a book reliant on risk and speculation.

What's ahead for ethylene? Will liquidity continue to dry up, returning us to the days when one trade a week was big news?

That's doubtful. There are fewer people in the ethylene market than in 2016, but a healthy number of companies continue to lease storage space at the major hubs in Mont Belvieu, Texas, and Choctaw, Louisiana.

And more hubs are on the way! One way to stimulate more opportunities in any commodity is to create more options, such as different locations.

So, the market may be down in the dumps at the moment, but 2019 could end up being remembered as "The Year of the Ethylene Comeback." Watch this space to stay on top of what's next.

OPIS PetroChem Wire Daily provides prices that reflect how the ethylene markets really trades. Learn more about this report and try it free.

Braskem has popularized "Green" #polyethylene. Now, the question is what does "Green" really mean? Hear from Dr. Je… https://t.co/nRcbQsobar

RT @IHSMarkitEnergy: Get critical fundamentals training before #IHSMarkitWPC 2021 kicks off. Topics include how the #EnergyTransition is re…

Hear how #chemical and #plastics companies along the supply chain are working together to build a more sustainable… https://t.co/fCmMOn2gIS