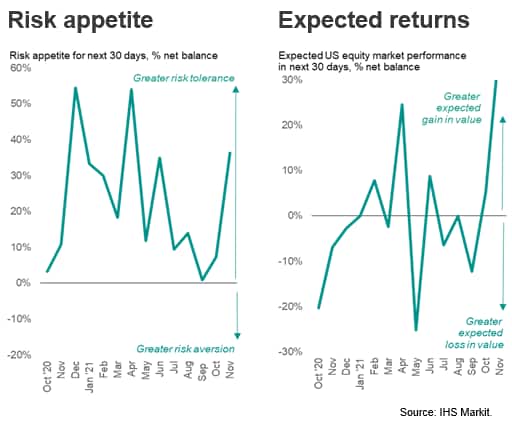 US equity investor risk appetite improved for a second month running in November, rising to the highest since April. Expectations of near-term returns meanwhile hit a new high, fueled by improved prospects for earnings, equity fundamentals and shareholder returns, as well as brighter outlooks for macro and policy factors.

The Risk Appetite Index from IHS Markit's Investment Manager Index™ (IMI™) monthly survey, which is based on data from around 100 institutional investors each month, rose from +7% in October to +36% in November, its highest since the survey peak of +54% seen back in April 2021. As such, the survey indicates a substantial improvement from the near-evaporation of risk appetite recorded back in September.

The swelling of risk appetite was accompanied by a marked uplift in investors' expectations of market returns over the coming month to a survey high, surpassing the prior (April) peak by a wide margin and building further on the improvement seen in October.

By comparison, the survey's Expected Returns Index had fallen to -12% in September, which preceded the brief market fall, before rising again to signal to a marked turnaround in sentiment which has gathered momentum over the past two months. The index has now risen to +38%.

The biggest drivers of the market in the near-term are considered to be equity fundamentals and shareholder returns, the former viewed as the most supportive since August and the latter seen as more supportive than at any time over the 14-month survey history.

However, November also saw investors' expectations of market support from both central bank and fiscal policy lift higher, having sunk in both cases to survey lows in October. Similarly, the macro environment is also seen as more positive for equities than viewed in October, with both the US and global economies set to provide the biggest contributions to returns since July, coinciding in particular with signs of the COVID-19 Delta wave easing.

With the S&P 500 reaching new highs, valuations against historical levels meanwhile remain by far the largest perceived anchor on the market, and is the only factor not to see an improving trend in November.

The political environment is again perceived as a net drag on returns, albeit slightly less so than in October, reflecting concerns over domestic budget spending as well as broader geopolitical issues and China's tech regulation.

In terms of sector preferences, financials have retained the most-favored spot in November for a third successive month having seen the biggest positive shift in sentiment over the past year, followed by healthcare. However, it was tech stocks that enjoyed the largest upswing in favorability compared to October, with sentiment rising to the highest since February.

These improving factors coincide with a strong Q3 earnings season which has led investors to revise up their expectations of Q4 earnings on average.

The net upward revision of +22% is lower than the reading of +30% seen back in August, but nevertheless is a strongly positive reading.

The overall net upward revision to Q4 earnings estimates tallies with the substantial jump in risk appetite recorded by the November IMI survey and coincides with equity fundamentals being the strongest expected driver for near-term market returns in the latest poll. 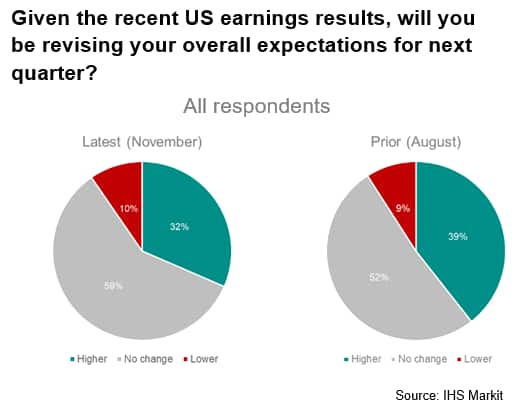 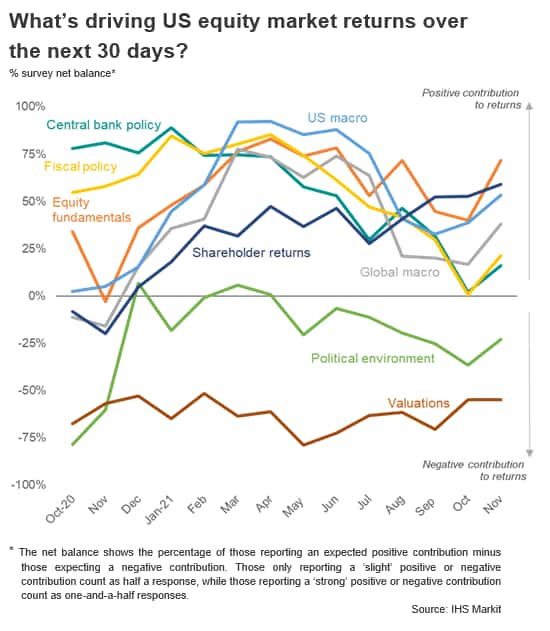 "A strong Q3 earnings season has coincided with brighter economic prospects and reduced concerns over COVID-19 as the Delta wave eases, propelling risk appetite higher in November. While central bank policy, fiscal policy and the macro environment are viewed as far less supportive of the market than earlier in the year, November has seen investors become less concerned, with expectations of near-term equity market returns spiking higher and Q4 earnings estimates revised higher."

"We continue to see a significant correlation between the IMI survey results and the $21T in equity trading settlement data we track on a weekly basis. The positive sentiment upswing for tech has been led by hedge funds which reversed course and aggressively increased exposure after two consecutive weeks of selling. Meanwhile, healthcare stocks have benefited from both institutional and ETF inflows despite profit-taking by hedge funds."

"Shareholder returns are of increasing importance going into Q4 and investors expect to be rewarded with growing dividends and buybacks. As COVID-19 fears wane, rising inflation and labor costs are now the key risks to capital allocation priorities, however we expect dividends will prove to be just as persistent as any other cost and see S&P 500 dividends approaching double-digit growth in 2022."