The US EPA released the proposed Affordable Clean Energy (ACE) rule on 21 August 2018. The Clean Power Plan replacement would establish guidelines for regulating carbon dioxide (CO2) emissions from existing coal-fired power plants. The proposed rule defines opportunities for emissions reductions as a list of seven "candidate technologies" that the EPA has determined to be the most impactful heat rate improvement (HRI) measures. The EPA's accompanying analysis of the proposed rule assessed HRIs from the candidate technologies ranging from 2.0% to 4.5%, but the proposal acknowledged that the HRI potential will depend on unit-specific factors.

The proposed rule also includes revisions to the New Source Review (NSR) permitting program. Currently, any plant modifications that are expected to increase air emissions on an annual basis trigger a costly permitting process and installation of the latest pollution controls. Under the proposal, states would have the option of adopting a more lenient, hourly test for NSR applicability.

Coal's share of the US electricity mix has been challenged in recent years by low natural gas prices, falling renewable energy costs, and flat energy demand. Since the Clean Power Plan was proposed in 2014, coal capacity has declined by 56 GW (19%). Today, coal capacity represents about 22% of operating capacity while producing 69% of power sector CO2 emissions. 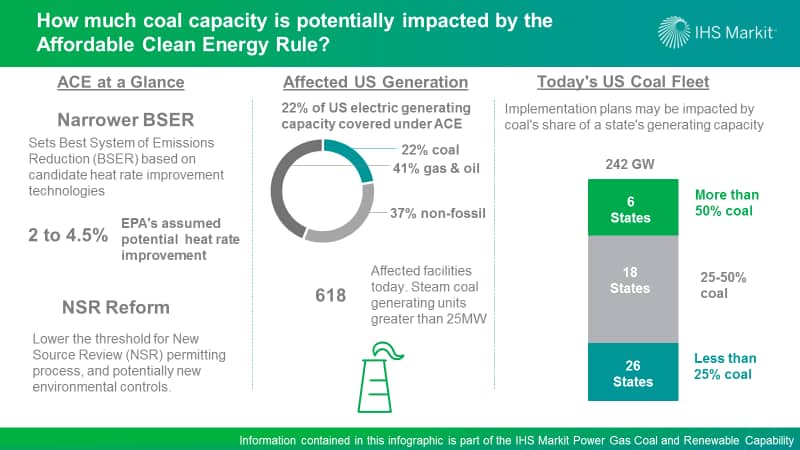 While numerous factors will influence state implementation plan development, if the rules were finalized as proposed states with significant coal capacity may be more inclined to utilize the flexibility it affords. There are six US states where coal plants constitute more than 50% of the total in-state power generating capacity today, totaling 62 GW, or 25% of the US total. In contrast, 26 states have coal generating capacity that constitutes less than 25% of their in-state capacity today. Arguably, coal-light states would be under less pressure than coal-heavy to utilize the flexibility measures, all other factors being equal.

Learn more about our coverage of the US energy market through our regional power, gas, coal, and renewables service.

Patrick Luckow is a Principal Research Analyst at IHS Markit.