The US economy grew faster than economists expected in the first quarter, but a robust pace of expansion had been signalled ahead by the PMI business surveys. The latter nevertheless suggest the pace of growth has weakened markedly at the start of the second quarter, according to the preliminary 'flash' estimate.

The first official estimate of gross domestic product showed the economy picking up speed in the opening three months of 2019, with GDP rising at an annualised rate of 3.2% after a 2.2% rise in the fourth quarter of 2018. Economists polled by Reuters had expected growth of just 2.0%. However, PMI survey data from IHS Markit had pointed to growth of 2.5%, warning that first quarter growth could come in higher than analysts were generally expecting. 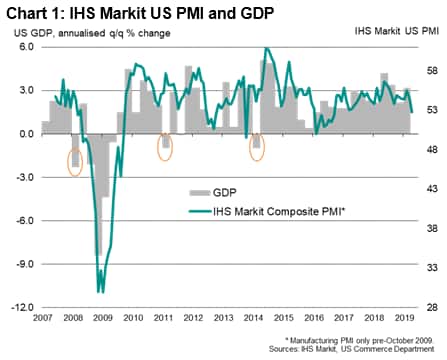 With a few exceptions, such as residual seasonality which appears to persist in years prior to 2015 (see highlighted data in chart), the survey data have a strong track record of accurately anticipating GDP data and regularly beat the consensus.

We use a simple linear regression model to nowcast GDP, using quarterly averages of the output and new orders indices from the composite PMI (a weighted index from the manufacturing and services surveys). The regression has an adjusted r-square of 0.75 when the highlighted GDP outliers are excluded and indicates that the rate of economic growth has slowed to 1.8% at the start of the second quarter.

A slower overall increase in output in April was driven by widespread reports of softer demand conditions, with new order growth easing for the second month running in April to the weakest for two years.

A major contrast in April to the first quarter was a marked slowing of growth in the service sector, highlighting how a factory-led slowdown has now spread. The flash services PMI business activity index fell to its lowest since March 2017.

The manufacturing PMI's output index is meanwhile indicative of a downturn in factory production continuing into April, albeit with the rate of decline moderating slightly. 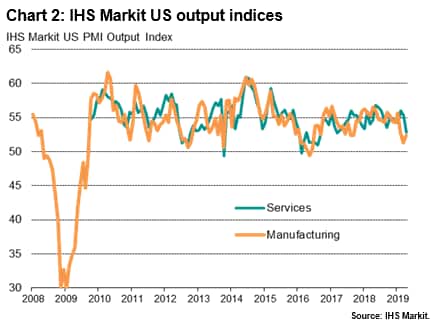