US economy to extend record expansion in 2020

It's that time when economists dust off their crystal balls and fearlessly pronounce their prognostications for the coming year. I'm expecting US economic growth in 2020 to be solid, with inflation, interest rates, and unemployment all within recent, comfortable ranges.

But first, some perspective. The US unemployment rate is at a 55-year low and utilization rates are high in many industries. This suggests growth in 2020 will be constrained from the "supply side" of the economy. Given recent trends in the labor force and productivity, I estimate US "trend" or "potential" growth at around 2% per year. Anything reasonably close to that should, given today's circumstances, be considered "solid".

Why expect another solid year in 2020? Recall from your Econ 101 class that the odds of recession are lowest, and the odds of expansion highest, when both monetary and fiscal policy are expansionary. During 2019, both policies pivoted away from potential contractionary stances towards stimulative postures. It was a favorable shift in the mix of policy! Read on.

A year ago the Fed had raised its policy rate, the federal funds rate, to nearly 2.5%, and there were widespread expectations, fostered by Fed officials themselves, that the funds rate would rise further. However, during 2019, as downside risks mounted — higher tariffs, spiking trade policy uncertainty, an emerging global slowdown, heightened concerns of a "hard" or "no-deal" Brexit, and possible cuts (or a "sequestration") of federal spending — the Fed unexpectedly reversed course and took out "policy insurance", lowering the funds rate three times by a cumulative ¾ percentage point. The difference between where the policy rate is today and where, a year ago, we expected it to be today, is almost 2 percentage points. Since monetary policy affects growth with a lag, the Fed's policy pivot in 2019 will afford the economy considerable support in 2020. 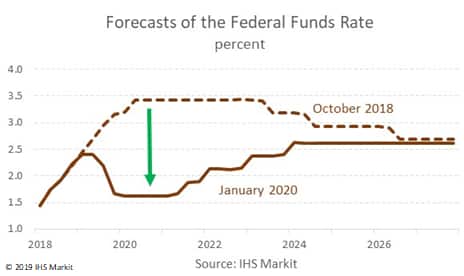 And fiscal policy? Spending caps set in the 2018 Budget Act were slated to expire in October of 2019, at which time the Budget Control Act of 2011 would have required a 5% cut in federal discretionary outlays. However, in early 2019, Congress passed legislation raising spending caps for fiscal years 2020-21 (and also suspending the debt ceiling until 2021), and subsequently funded federal agencies at those higher caps for the next fiscal year. Consequently, instead of a possible 5% decline in outlays, fiscal year 2020 should see a 5% increase. The difference between where spending could have been next year and where we now expect it to be is more than $100 billion per year. 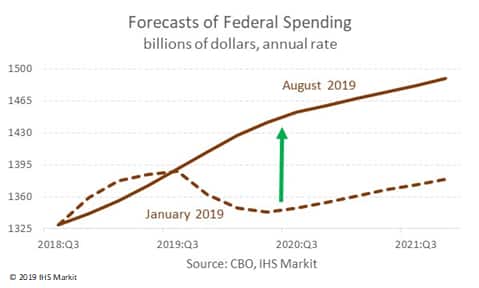 Meanwhile, threats that concerned us in 2019 have eased somewhat. The recent UK election provided some clarity on Brexit, and new British PM Johnson has a negotiated plan to avoid a no-deal departure from the EU. In the US, successful budget negotiations have eliminated the immediate risks of a government shutdown and a cut in spending. Our global economists expect global growth outside the US to stabilize in 2020 before turning up in 2021. The US and China have announced a "phase-one" trade deal that rolls back some tariffs that we'd assumed in previous forecasts. The yield curve, which temporarily "inverted" during the fall — a potential signal of impending recession — has reverted to a positive slope. With monetary and fiscal policies in place that guard against downside risks, risks that now may not materialize, and no obvious, large imbalances weighing on the economy, the stage is set for another solid year of growth.

Not surprisingly, investors have responded enthusiastically to this "de-risking", shoving the S&P 500 share price index towards a record year-end close. This, and strong recent gains in house prices, have left consumer balance sheets healthy entering the new year. In addition, unemployment and inflation are low, employment growth is firm, wages are gradually rising, and measures of consumer confidence are elevated. All this comes with the personal saving rate near 8%, leaving consumers positioned to power the expansion further in 2020. Yes, trade and capital spending remain areas of concern, but tariffs now suspended under the phase-one deal would have fallen importantly on imports of hi-tech equipment. Furthermore, our own research indicates that if trade policy uncertainty subsides (OK, it's too early to tell, so we remain cautious here), business fixed investment, especially in manufacturing, could get a $50 billion boost…a welcome upside risk!

My fearless forecasts for 2020: real GDP grows 2.1%, measured year-over-year; the unemployment ends the year close to the current 3.5%; with labor markets tight, "core" consumer price inflation, which excludes movements in the volatile prices of food and energy that often are independent of monetary policy, creeps higher but remains below the Fed's stated 2% objective; the Fed remains "on hold" all year; long-term interest rates edge up on the solid economy; and, the S&P consolidates the eye-popping 28% gain enjoyed in 2019 but does not repeat it. Not bad for an economy that last July entered the longest expansion on modern-day record.

Posted 24 December 2019 by Joel Prakken, Ph.D., Chief US Economist and co-head of US Economics, IHS Markit