US-China trade relations and the implications on the LNG Market

China raised the tariff on US LNG imports to 25% Trade tensions between China and the United States have been re-escalating in recent months. On May 10, the Trump administration claimed that China reneged on commitments from previous negotiations and announced that the US would increase tariffs on $200 billion of Chinese imports. Instead of the 10% tariff imposed in September 2018, the new tariff would be 25%.

China responded on May 13 by raising tariffs on $60 billion of US imports beginning June 1. On the list of products with tariffs jumping from 10% to 25% was liquefied natural gas (LNG), a commodity that was once hoped to be part of a solution to the trade tensions between the two countries.

The higher tariff will reduce the competitiveness of US LNG delivered to China relative to other supply sources.

While contract terms vary, the higher tariff could place US LNG out of the money relative to some traditional oil-indexed supply. Let's assume that, with no tariff, US LNG is priced at 115% of the Henry Hub pricing point for natural gas futures plus $4.50/ million BTUs (MMBtu) versus oil-indexed LNG priced at a 12% slope plus $0.25/MMBtu. In this case, US LNG delivered to China would be in the money when oil is $64/barrel or higher (see Figure 1).

When the 10% tariff on US LNG became effective, the oil price at which US LNG was in the money increased to $71/barrel. The 25% tariff will bring this price level to $81/bbl. Even with the recent oil supply disruption, however, Brent has not broken this price level since the fourth quarter of 2018. Effectively, the 25% tariff on US LNG would add nearly $1.20/MMBtu of incremental costs compared with the previous 10% tariff, bringing additional financial challenges for China at a time when most LNG sold into the domestic pipeline system is already facing financial losses.

To be competitive in China on a spot basis, US LNG would need to be priced at a discount to spot prices - which are hovering around $4.50/MMBtu for prompt month's delivery - to account for the impact of the tariff. At the 25% tariff, the US LNG discount needed to achieve parity with the Asia spot price is approximately $1.10/MMBtu.

In addition, political headwinds are a far more important consideration compared with the additional cost of US LNG. Indeed, there has been a significant drop in imports of US LNG since the 10% tariff became effective in late September 2018. Since then, only six US LNG cargoes have arrived at China's coast, none of those since April 2019.

Various companies around the world have gravitated towards US LNG to meet their supply needs. The US is generally viewed as a source of cost-competitive supply, thanks to low expected hub prices; downward pressure on liquefaction fees; optionality and destination flexibility; and a wide variety of commercial terms and available business models.

China has been on an LNG contracting spree to meet its growing gas demand and to avoid the supply shortages seen during the winter of 2017-18. China National Petroleum Corporation signed the first binding deals between a Chinese company and a US LNG developer, Cheniere Energy, in February 2018. Other Chinese companies, both national oil companies (NOCs) and non-NOCs, have also signed non-binding agreements over the last few years. However, China has not executed any binding US LNG contracts since the 10% tariff was implemented. 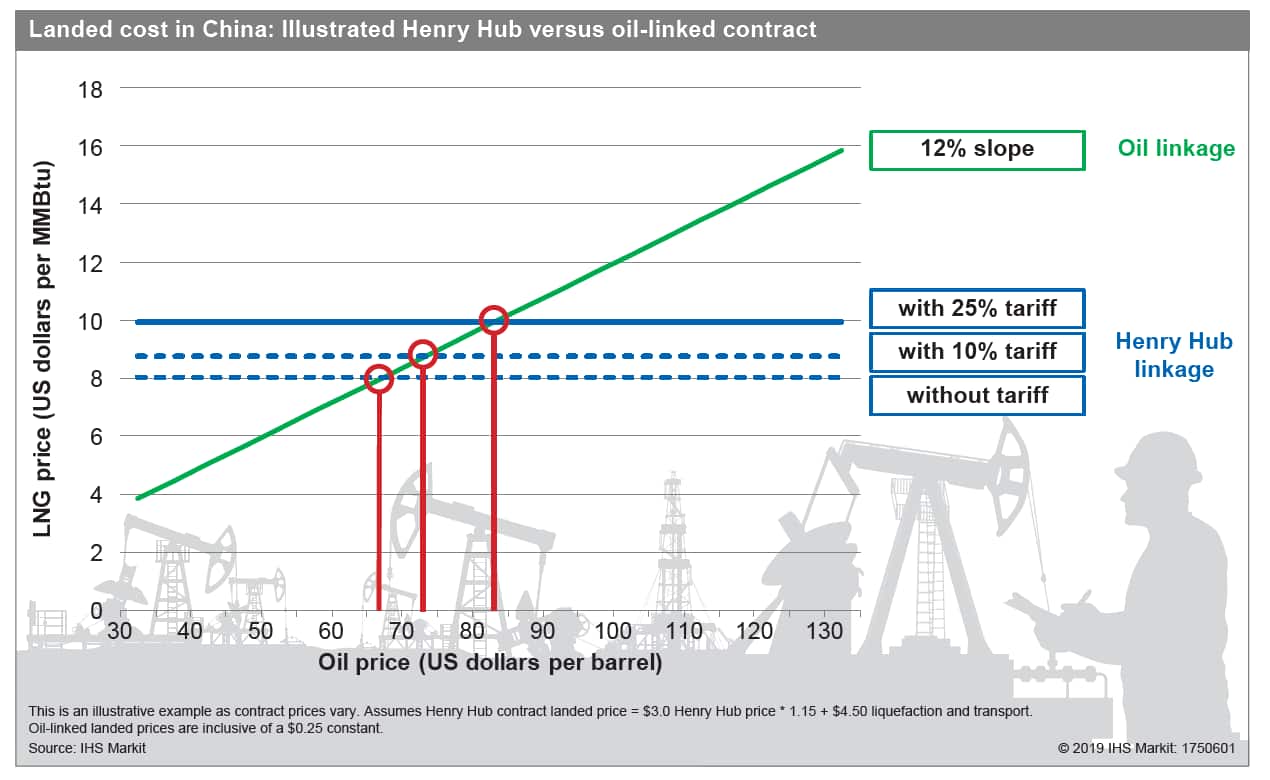 No offtake agreements between Chinese companies and US LNG developers are likely to be finalized until the trade tensions are resolved. As state-owned companies, the NOCs—which accounted for 94% of China's total LNG imports in 2018—will show their compliance with the central government's political stance. The non-NOCs, although not as strictly regulated as the NOCs, still need political support in various market reform initiatives and project approvals to expand their businesses. It's likely that they will also support the government's stance.

China has numerous non-US supply alternatives. Many projects are competing to reach final investment decisions (FIDs) over the next several years. Some legacy projects are seeking to remarket volumes after existing contracts expire, and portfolio players are looking to place cargoes. In recent months, both Chinese NOCs and non-NOCs have signed binding agreements with projects or companies in Canada, Mozambique, Papua New Guinea, Russia, and Qatar, as well as preliminary agreements in Canada, the Republic of Congo, and Russia. Several portfolio deals are also in the works.

While the impact of the tariffs on US projects will vary by project, it is generally negative and underscores the importance of having a diverse customer base. Projects marketing heavily toward China may need to switch gears or push back the timing of an FID. However, it may be difficult to substitute China for other growth markets on a one-to-one basis.

Discussions are still ongoing, but reaching a deal may be a prolonged process

LNG has been one of the key areas of common interest. The US has plenty of LNG to export, and the Trump administration is a key supporter. Chinese gas demand is still growing rapidly, making supply security a key policy consideration. More US LNG exports to China will also help narrow the trade deficit between the two countries. In our outlook, China will need an additional 48 million metric tons per annum of LNG by 2030 to meet its growing gas demand. If half of this came from the United States, the current annual trade deficit would be reduced by $10 billion, assuming an $8/MMBtu landed price.

However, a new round of tariffs has been added on both sides effective September 1, though trade talks should resume in October. In principle, the United States wants to leave at least a few tariffs in place and is concerned about the volume of goods and services China will procure from the United States. On the other hand, China wants to abolish all relevant duties. In addition, there are quite a few other key areas that the two countries still need to discuss. As a result, reaching a deal may be a prolonged process.

Jenny Yang, is the research manager of the Gas, Power, and Energy Futures team for China at IHS Markit.

Matthew Shruhan is a senior analyst with the LNG practice at IHS Markit.