US CEPP Proposal: Sizing up what takes to get to 80% clean electricity by 2030

As Democrats in the US Congress continue to debate the components of a broad legislative climate change package, the outline of a proposed policy to drive significant clean electricity development is beginning to emerge.

A so-called Clean Electricity Payment Program (CEPP) is the leading candidate to drive decarbonization owing to the constraints of budget reconciliation in a deeply divided Congress. While important details are still emerging, a CEPP proposal is likely to center around several important elements, including:

IHS Markit estimates that the policy could call for roughly 600 GW of new incremental clean energy supply in 2023-30 if it were fulfilled with only wind and solar PV. This amounts to an annual average of 75 GW, which is roughly double the capacity added in calendar 2020 of these two technologies. While offshore wind is expected to play a significantly larger role in new wind additions this decade (approximately 25 GW through 2030), onshore wind and solar PV would still need to average more than 70 GW per year.

Most suppliers' 2030 clean energy supply target would range from 40% to 85%, the wide variation explained by differences in baseline year supply mix and the policy design. This estimate relies state-level electricity supply data as a proxy for that of the largest suppliers to whom the policy would be applicable. (See Figure).

While the CEPP has the potential to drive significantly higher investment in US clean energy supply, it alone is insufficient to achieve 80% clean energy by 2030 - the acceleration of development activity called for is unlikely to be achieved without a significant increase in transmission investment. 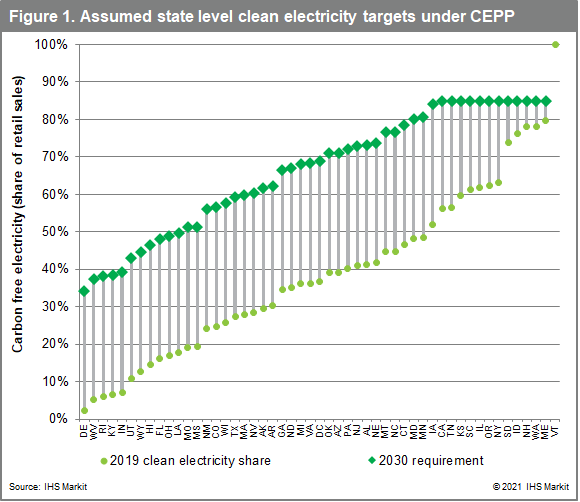 Patrick Luckow, an associate director of the Climate and Sustainability Group at IHS Markit, focuses on regional and national carbon policy and associated markets, including the Regional Greenhouse Gas Initiative and the linked, economy-wide greenhouse gas markets in California and Quebec.

“There’s no surplus capacity across the global gas complex, leaving Europe and Asia in a tug-of-war for available s… https://t.co/U0AExw0xdE