Dividends from US blue-chips continue to surge in Q2, forecast up $2.5bn

IHS Markit is forecasting that quarterly dividends declared by firms in the S&P 500 will top $115bn in the current calendar quarter, up 2.3% from $112.5bn declared in Q1. Of the 404 large-caps that announce quarterly payments, we expect 71 to increase their dividend payments over Q1 levels. We don't foresee any dividend cuts in Q2, which would mark a second consecutive quarter of wholly positive actions.

This upbeat outlook is a consequence of the heady effect of tax reform legislation and propitious macro outlook, and follows an exceptional first quarter for dividends in which 128 firms announced increases (compared with 109 announced in Q1 2017). It has been striking to note that the growth has been boosted by firms emboldened to alter their historical pattern of dividend increases. This is manifest in firms that declared "double-increases" - having already increased their dividend in Q4 2017, they followed with a consecutive increase in Q1, and also in firms that have "accelerated" dividend increases to an earlier quarter than usual. Tech firm ADP is a prime example - although it historically increases its dividend in November, it has already announced an extra dividend hike in Q2 to return to shareholders of a portion of the benefits from the tax cuts windfall.

This surge in increases has caused us to revise up our annual forecasts and we now expect these large-caps to declare quarterly dividends worth over $465bn in 2018. This represents annual growth of 9% on the equivalent payments in 2017, the highest rate of increase for three years. Since the Tax Cuts and Jobs Act was passed in December 2017, our forecasts have seen upward revisions of $7bn, or 1.75 percentage points. Given the number of dividends surpassing expectations for dividend growth already, we expect further positive declarations could push the final rate close to double-digits. 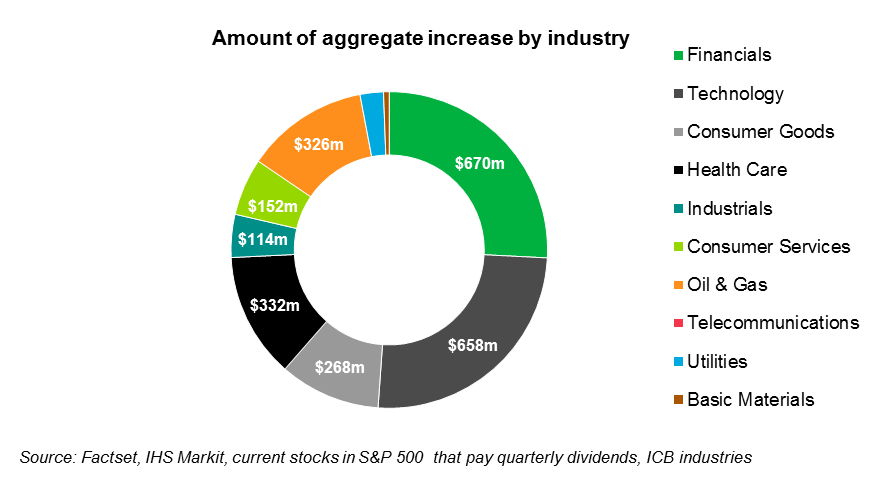 At an industry level, Financials are expected to account for 23 of the increases worth $670m in aggregate. Looking more closely, at a company level we are forecasting the largest aggregate increase from JP Morgan Chase & Co, with an 18% surge which results in a $341m payout increase, accounting for over half the industry payout growth this quarter. However Q3 is the most significant quarter for dividends in this sector, after the Fed's CCAR guidance.

The next largest sector for dividend increases is Technology, with 10 firms expected to announce $658m worth of increases. We are projecting Apple to increase its dividend by $304m in aggregate terms. This is an increase of 10%, consistent with the firm's habitual growth rate since 2014. However, in view of the favourable environment there is a possibility that the growth could deviate higher. In 2013 the firm boosted the payment by 15%, the highest rate since starting payments in 2012; if this level was repeated it would add an additional $150m in the quarter, or $450m over the remainder of the year. Elsewhere in the sector, Hewlett Packard Enterprises already announced a 50% dividend increase to $0.1125 at the start of April, leading to a payout hike of $174.7m.

It's crunch time for cryptocurrency brokers & owners. How will the US infrastructure bill change your tax rules and… https://t.co/KZhAVGyE3y

Caroline Löfgren from Hg speaks to our own Jocelyn Lewis about key considerations for creating a successful ESG str… https://t.co/dYtKif0vY3

Collateral management and compliance managers need to start preparing for the final phase of IM requirements to ens… https://t.co/G98PRj3KPX

We are delighted to announce our collaboration with Yieldbroker, the leading tier 1 licensed electronic trading pla… https://t.co/iqcXH4k2Um